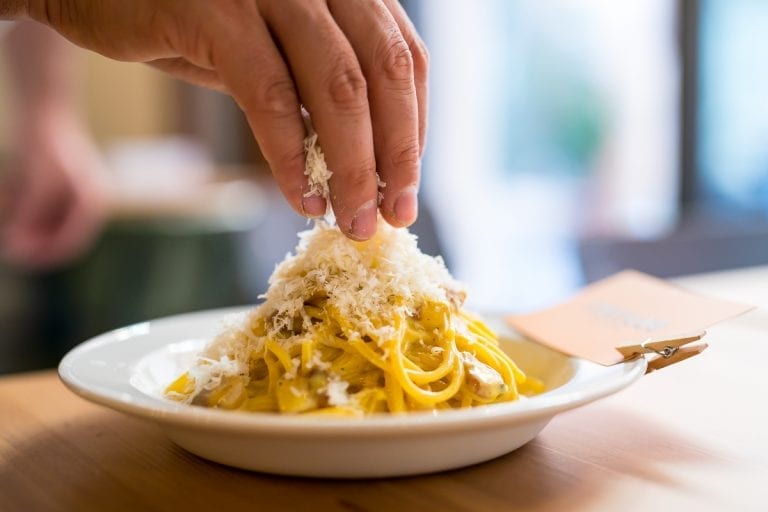 In love with Carbonara. Eggs, guanciale, pecorino: three simple ingredients for a symbolic dish of Rome's cucina romana. Simple as it is difficult to make well. Here's the perfect recipe with the advice of chefs.

The restrictions dictated by Covid impose home dinners throughout Italy (apart from Sardinia) and push many to stove-side pottering. With a little nostalgia, we’re all pining for thise memory dishes, thanks to the moment of uncertainty that – it’s history – is pushing people towards tradition, seeking refuge in their comfort zone. It happens with fashions, but also with cooking. Therefore, rather than exotic preparations, we look at home flavours, sometimes yielding to the false history of recipes credited with a history that they don’t actually possess. This is the case of carbonara–that pasta dish made with eggs, guanciale, pecorino–born “only” in the middle of the last century, which entered the common imagination as one of the emblems of Roman cuisine, a magnificent obsession of many chefs for profession or for love, which around this recipe create a dogma without solid foundations. In fact, Italy is made up of great parochialism at the table much more than in other areas. So, while remembering that a recipe codified over the centuries does not exist (and that until 70 years ago this dish did not exist), we asked the greatest interpreters of carbonara for their secret touches. We have collected 10.

Cantor of the tradition of Rome and the Castelli hills, without retreating from the perspective of original soulful interpretations of these places, Arcangelo Dandini is chef and owner of L’Arcangelo, in the Prati district of Rome. These days the restaurant is closed, but its spin off selling all manner of fried food stays open 7 days a week: Supplizio. A place that, in the historic centre, offers the most delicious Roman street food: fried foods, croquettes and other delicacies to enjoy on the go. The reopening of L’Arcangelo? Dandini like many of his colleagues, awaits future governmental guidelines. Here are his tips for carbonara which always starts from certified supply chain ingredients, such as the guanciale cut into 1cm wide by 2cm long lardons browned moderately, left semi-soft without making it excessively crisp and without removing all the fat to bring out the bitter note.

Flavio De Maio is one of the most true, authentic, spontaneous historical names of “romanity,” also possessing deep gastronomic culture. Flavio is the owner of the restaurant that bears his name, located in the heart of Testaccio, a corner of Paradise complete with a terrace where guests can touch the sky and dining rooms literally carved “inside” the Monte dei Cocci, an artificial hill built from fragments of ancient Roman amphorae, which occupies what once was the ancient Port of Ripa and where these ancient shards are still stacked one on top of the other. Here Flavio governs the kitchen with a confident hand, relentlessly creating traditional dishes, in his interpretation which is only apparently rustic. Wisdom, like the essential, is invisible to the eye, but clearly evident on the plate. His is a record-breaking carbonara, “more than a recipe, it’s an interpretative technique,” with more than one passage to discover, starting with the curing of the guanciale which, if too fresh, will not release all the aromas it is capable of during browning, and the pecorino, which must be aged around 14 months, to maintain the right balance. Products he knows well and knows how to cook: “The pecorino cheese, the part closest to the rind, which is saltier, must be discarded; and the outer part of the guanciale must also be carefully trimmed away.”

“The trick? There are no tricks,” says Luciano Monosilio, chef and owner of the restaurant that bears his name in the renovated Piazza del Teatro di Pompeo, steps away from Campo de’ Fiori LINK. Great dexterity and good ingredients are essential for a perfect carbonara, he explains, and he––who makes dishes and dishes of it, one after the other––has decided to take the bull by the horns. He in fact independently cures his own guanciale, which he has specially made by a butcher near Rome, and does a double pasteurization of the eggs: “I make so many plates of carbonara that I was no longer able to ensure the correct temperature. So I decided to use already slowly pasteurized yolks to which, after adding the cheese, I make a second go at 60°C for three hours, stirring continuously.”

From their little corner in Centocelle, the Camponeschi brothers are conquering the city with tasty recipes, that appear simple, but are in actual fact quite refined dishes made to look like everyday life, and which play the (winning) card of a delicious, perfectly executed proposal. In recent times it is not uncommon to see them, on weekends, in Testaccio, in the open spaces (and not only) that belonged to the ex-Stazione di Posta, involved in a project we will hear a lot about in the future. Returning to their carbonara and the restaurant located on via delle Palme––a corner much loved by natural wines lovers––you won’t find it on the menu, but it’s always available, along with other Roman classics: amatriciana, gricia, cacio e pepe. But carbonara reigns undisputed, queen today more than yesterday among the Roman pasta dishes. So, don’t look for it: just ask for it. You will find a less heavy version, because it forgoes some animal fats. Here are the secrets of Paolo and Daniele, respectively in the kitchen and in the dining room (and baking the desserts, too).

A deli with a kitchen, says a deliberately not too visible sign. But just look at the small window display to understand that precious goodness hides behind that door of wonders. The well-stocked counter speaks for itself: prosciuttos, salumi, pecorino and goat milk cheeses arriving from all over the world, pickled jars, gastronomy products, rare foods and specialties that are very difficult to find, and to find all in one place. All around are shelves chock full of wine bottles, even rare ones, ready to be uncorked and paired, perhaps with a grand LINK cheese, or to be enjoyed with the pizza and the legendary bread baked at the nearby family oven. And then a kitchen that goes straight to the point, and knows how to make those products shine in new creations, never too whimsical, always perfectly centered in the perspective of a kitchen that revolves around the shop. The fundamental piece that articulated the Roscioli organism, which from the bread baker includes the coffee shop and from there to the Rimessa––wine club with cuisine––a pilgrimage destination for wine lovers. The Salumeria is a cavern of wonders, a true treasure trove for gourmands who know that here they will find–among other things–one of the most famous carbonaras in Rome, the work of Nabil Hadj Hassan, a talented chef who has made his reign in these minimal spaces. The secret to the perfect carbonara? “Humility, love and sensitivity.” In addition to quality ingredients, which have to be “excellent” and a couple of tricks that the chef shared with us.