Beef Wellington: history and recipe of an iconic dish 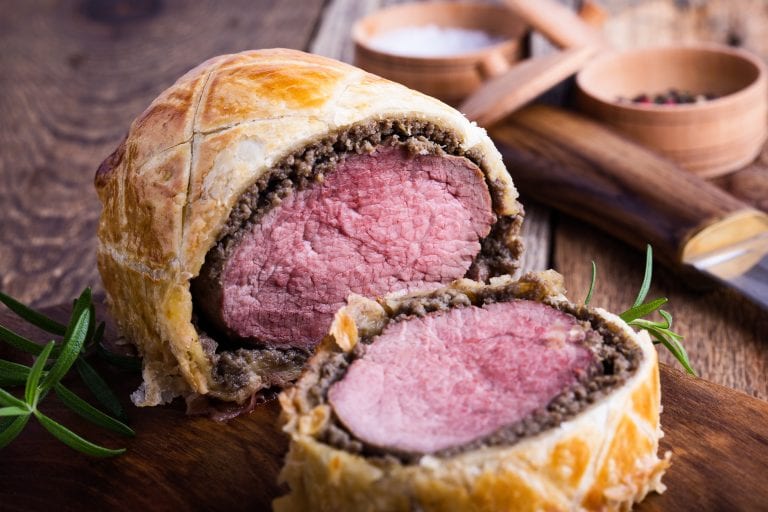 Today it is famous mainly thanks to Gordon Ramsey, but beef Wellington has much older origins, dating back to the nineteenth century.

How beef Wellington is made

He was born as Arthur Wellesley but gone down in history as “The Duke of Wellington”, a title he received after leading (along with General von Blucher) the Seventh Coalition during the Battle of Waterloo in 1815. The defeat that decreed the end of the Napoleonic Empire brought glory and respect to the Duke, known for his strategic skills but also for his demanding palate and difficult tastes. In fact, it seems that the chefs at his service never managed to satisfy him, despite their efforts to create sophisticated dishes. One after the other, they were fired because no recipe could whet the appetite of the war hero, who had little interest in cooking and certainly not a big greedy. Yet, there was a dish that could win him over and make him think about the pleasures of the table: a roast in a crust that was reminiscent of his boots in colour and shape. Yes, we are talking about the famous beef Wellington, one of the most iconic dishes of English cuisine, made famous in recent years by Gordon Ramsey and appreciated for its particular cooking.

It was the British chef who brought back the long and complex recipe, a whole beef fillet covered with mushrooms and ham and wrapped in puff pastry, once accompanied by Madeira sauce. Although the Duke's theory is the most credited, there are other hypotheses about the origin of the dish, which does not appear in any English cookbook until 1970 or in any other text. The first literary testimony is that of Michael Bond, in one of his books on Paddington bear, "Paddington Takes the Test" of 1981. According to many, the recipe is actually of French origin, although the first written references almost all come from the United States and are relatively modern. What is certain is that the Wellington fillet as we know it today was first made famous by the American chef and star Julia Child, who introduced the filet de bśuf en croûte, the French crust beef fillet, as “Filet of Wellington Beef” during her TV show “The French Chef”, on the 1965 New Year’s Eve episode. From that day on, the recipe began to appear in various recreational circles in North America, as well as being taken up in the most important cookbooks.

The tradition of puff pasty in England

In addition to the name, there is a lot of English in this dish: in Cornwall (in South-West of England), an uncontaminated and wild land where you can find authentic recipes of remote origins, there is a long tradition of pasty, or preparations with puff pastry (the name can be translated as “fagottino" in italian) that enclose delicious and very seasoned fillings. Cornish pasties have long since become popular street food even in big cities like London, but in the past they were simply typical local recipes, a must in pubs and taverns, already present since the seventeenth century and always characterised by rich, spicy and delicious fillings. The beef pasty, for example, often made with the leftovers of the roast beef of the typical Sunday Roast, the English Sunday lunch: a preparation that takes up several elements of the Wellington fillet.

How to make the beef Wellington

Although it seems like a simple dish, the recipe is not at all trivial: the main difficulty is in cooking the meat, which must first be fried in a pan with a little oil. It should not be cooked, however, but only slightly browned: the inside must remain in blood, if we do not want a hard and dry fillet. After this step, it is time to spread the meat with mushrooms (usually cooked in a pan and purified), the slices of raw ham and in many cases mustard (often used in Italy but absent in many English recipes) and let it rest in the fridge. Once the fillet is wrapped in puff pastry, it is to be brushed with beaten eggs to obtain the typical golden color. It is usually cooked at 200°C for about half an hour, but everything varies according to the size of the fillet; the important thing is to let the roll rest a little before cutting and serving it.

For an even more enjoyable variant of the fillet, here is our proposal with fried crust in mini version: this way, you can serve many single-serving fillets, perfect also for a tasty appetiser.

Slice the mushrooms and brown them in a pan with a knob of truffle butter. Turn off the flame, season with salt and pepper and blend. Put the mixture through a sieve to remove excess liquid, then incorporate the rest of the cold butter. Cut the fillet into regular rectangles (about 3 x 8 cm) and massage them with mustard. Spread a slice of ham, overlap 2-3 spinach leaves and spread a teaspoon of mushroom paste. Lay a fillet of beef on top and wrap into a roulade. Cut the puff pastry into squares, poke holes in them and roll them around the meat fillets. Seal the ends and lightly score the surface with the blade of a knife, then fry the fillets in plenty of hot oil (170°C), drain on kitchen paper and sprinkle with salt. Wait a few minutes before cutting the fillets in half and serving with fresh strawberries or raspberries.