Art and science: the works reveal the botanical evolution of fruit and vegetables. 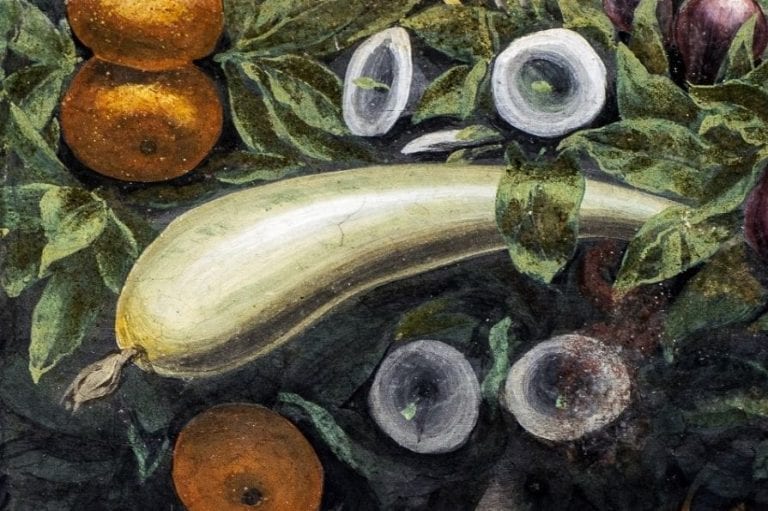 What did plant species look like in the Renaissance? And how many transformations did they undergo before taking on their current shape and colours? The answer emerges from ancient art masterpieces, which can provide researchers with invaluable information on the genetic evolution of fruits and vegetables.

“The secret of arts is to correct nature”, wrote Voltaire. What if it was to represent it in the smallest detail? It’s hard to answer quickly. In some works, in fact, the boundary between objective reproduction and free interpretation of reality appears so thin that any scientific classification is rendered meaningless. On the other hand, it seems that the most faithful – or presumed – paintings and frescoes can provide researchers with extremely valuable information about the botanical evolution of plant species. This is demonstrated by Art Genetycs, an experimental method developed by Belgian researchers David Vergauwen (teacher of art history in Amaranth) and Ive de Smet (geneticist at the Centre for the Biology of Plant Systems VIB-UGent in Gan), with the aim of analysing the morphological profile of fruits and vegetables depicted in ancient paintings.

Works of art to reconstruct the evolution of plant species

It all began with the analysis of Fruit Stall, a painting by Frans Snyders that the researchers – two great friends united by a visceral passion for art – had admired during their first visit to the Hermitage in St. Petersburg three years ago. At that time, noticing some vegetables difficult to identify in the market depicted by the famous Flemish author, the historian and the geneticist had come to the conclusion that their appearance was due not so much to the imprecision of the painting technique (on the contrary, particularly accurate) as to the difference between today’s and ancient species. A seemingly banal observation, from which the Art Genetycs project originated, based on the visual examination of plant-themed works and direct comparison with existing botanical samples. The interaction between art and science, after all, is nothing new: “This is demonstrated by studies conducted on tomb paintings of watermelons in Ancient Egypt which, together with DNA extracted from fossilized leaves of the fruit, date the first traces of cultivation to 2000 B.C.” Vergauwen told CNN.

As can be easily guessed, the method adopted by the Belgian researchers – which has been sifted through in a recent publication in the journal Trends in Plant Science – has a number of drawbacks that are hard to circumvent. While, as de Smet puts it, “it makes up for the genetic deficiencies caused by poor conservation of plant specimens”, it is also a problem with the lack of accessibility of canvases kept in museums (in order to determine the appearance of ancient vegetables, it would be necessary to compare the graphic representations of traditional vegetables. different authors and historical periods) and with doubts about the reliability of the testimonies analysed (since artists often deliberately alter the characteristics of the subjects portrayed). In short, art provides useful insights to understand the past, but it is still a product of human creativity and should not be considered as a substitute for research conducted on the DNA of botanical species. Vergauwen and de Smet, however, have created a global network based on the reciprocal exchange of images of the works: everyone is invited to participate. A great way to involve many other enthusiasts and scholars in the project.

Art and botany: the frescoes of Villa Farnesina in Rome

Similar on a theoretical level, but decidedly more concrete on an operational level, the analysis campaign carried out on the frescoes of the Loggia di Amore e Psiche, designed and partially executed by Raphael in the rooms of Villa Farnesina in Rome. Here the research team led by Antonio Sgamellotti (Professor Emeritus of Inorganic Chemistry at Perugia University) and Giulia Caneva (Professor of Environmental and Applied Botany at the Roma tre University) focused on the naturalistic motifs of the festoons that frame the scenes of the pictorial cycle, masterfully made by Giovanni da Udine (among the best students of the great artist from Urbino) in 1517. These wonderful decorations, in fact, house as many as 170 different species of herbs, fruits and vegetables reproduced in imitation of the majestic garden of the owner, the Sienese banker Agostino Chigi. “Who, in order to show off his power, had imported an incredible number of plants from every corner of the globe”, observes Professor Caneva.

“The most suitable example is that of corn, which arrived in Rome for the first time just 20 years after the discovery of America! Analysing the number of caryopses on the panicles depicted, we were able to see that before its introduction in Europe, the Ameringhi had already selected some main varieties. In short, the maize currently diffused boasts very ancient origins. ” But every product holds surprises, from Mexican yellow squashes to Arab Emirates aloe, to Chinese oranges and Persian pomegranates, “and we were able to catalogue them all. A great achievement at a historical and scientific level. ” So, can art really help us trace the genetic evolution of fruits and vegetables?

Fruits and vegetables in paintings: an aid to science

“There is no doubt that the botanical analysis of works has greater margins of uncertainty than the identification of a real sample,” points out Professor Caneva.” The reason for this is quickly stated: frescoes of this type usually lack many elements of plant systematics necessary to ascertain the nature of the plant, from general morphology to flowers. But the Lodge of Amor and Psyche is an exception. Giovanni da Udine, in fact, was so faithful to reality that he even reproduced rotting fruits”. His favorite escamotage? Pass a layer of charcoal over fresh plaster to simulate dents. In addition, he seems to have created unusual colour combinations to render the idea of fully ripe melons, mixing antimony, tin and lead in proportions similar to those commonly used for painting on pottery.

But how did the researchers find out?

“We used X-ray fluorescence to map the entire surface of the streamer. In this way, we were able to closely analyse, on scaffolds, the various chemical elements of the shades used. And then, to do the classification work, we consulted several varietal databases and image catalogues. “ Of course, during the research there were many difficulties: “The ancient cultivars of roots such as scorzonera, carrot and parsnip gave us a hard time, because today they have a very different colour compared to what they had five hundred years ago. By now, however, we have understood: art never ceases to amaze”. 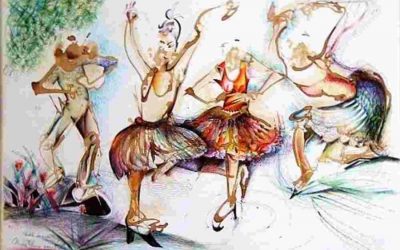 Biro e Caffè: paintings made with coffee on exhibit in Florence