Flippy, the new robot developed to help chefs in the kitchen 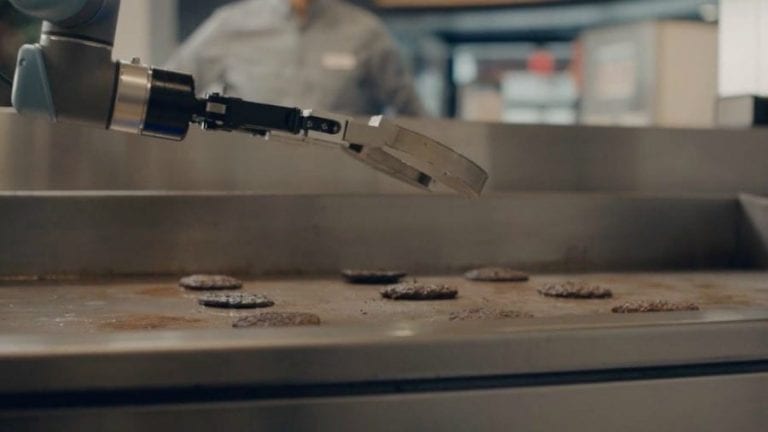 Robotics and AI are in constant evolution. Hailing from California is now Flippy, a brand new android capable of cooking and aiding chefs

There's a robot in the kitchen

It all started in Naples with RoDyMan, AI (Artificial Intelligence) robot developed in 2016 and now ready to go prom prototype to functioning protocol in the upcoming months. This is a pizza chef 2.0 created by Prisma Lab, a team of researchers of Naples University Federico II. The machine is capable of tracking movements and techniques of expert human pizza chefs, and reproduces them thanks to a camera with an infrared movement sensor. The goal here is developing in the machine the tactile sensibility necessary to contribute to other important fields, like medical for example. The Naples university objective is just one of many projects in the field of robotics and AI. Increasing number of androids is being developed by research teams in order to reduce (?) manpower and workload. In all the fields of application, the food industry is the one with the highest engagement rate.

One of the latest experiments comes from Pasadena, CA. A big chain of fast food outlets has recently “hired” Flippy, an automa with an AI mechanized arm developed by Miso Robotics in joint with Cali, owner of the CaliBurger chain. Flippy cooks meat and inserts the patty in sandwich bread, creating a pro hamburger. Besides placing the patty on the griddle, the robot can monitor the temperature and doneness level. When the patty is almost ready, Flippy calls to attention a human cook who is then in charge of prepping lettuce, sauces and condiments for the burger assembly. Flippy goes beyond just cooking, the android can also be used – as explained by David Zito, CEO of Miso Robotics – for chopping vegetables and plating a completed dish. Cameras, sensors and an automatic learning software to identify ingredients without the need for constant reconfigurations: these are the characteristics of Flippy’s functions. Currently still in experimental phase, once ready, Flippy will enter a further 50 outlets of the franchise within the next two years.

Doubts and thoughts on the matter

As it often happens in similar cases, specialists and scholars have raised doubts and criticism regarding this project. Especially in regards to matters of cooking. These are jobs that have always been artisanal, laboursome, and owed to the creativity and sensibility of man. The public’s scepticism is inevitable and understandable. The topic of robotics substituting manpower is a hot one, and recently examined in an e-book, Professione Robot (published by Informant), written by Claudio Simbula. In his volume, the author describes 31 jobs that automas will perform in place of humans in the near future, describing the reality of “the world that’s in store for us, one which we are already witnessing the changes”. The objectives presented by the research studies, including Miso Robotics, take a distance from substitution of human labour. Rather the goals of the experiments are optimizing the work and standardizing the quality of products. A standardization that however does not give up on the personal touch of human artisans. Flippy poses to become more of an assistant cook (and not a substitute chef) and a helpful aid in assembly and production lines, especially during busiest rush hour shifts.