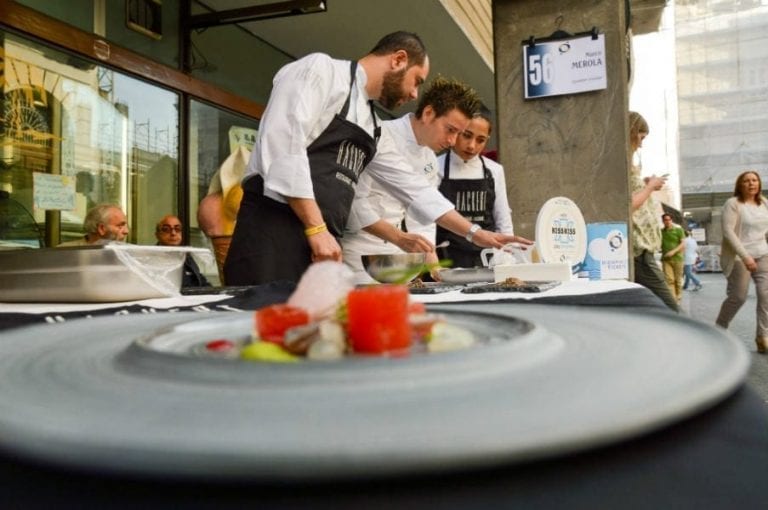 Over 300 chefs, more than 20 between pizzaioli and master bakers, producers and Italian food artisans, plus throngs of food lovers and tourists. This is Festa a Vico - la Repubblica del Cibo, an event created by chef Gennaro Esposito and now onto its 15th year, held 4-6 June 2017

Festa a Vico, “We are not from another world”

This is the slogan selected for this year’s Festa a Vico. A way to convey that despite the media visibility which has in recent years featured chefs like an alien, in order to properly carry out this profession, one must “simply” commit, do one’s best, and constantly improve one’s knowledge. At the heart of Repubblica del Cibo is Gennaro Esposito, the two Michelin star chef of restaurant Torre del Saracino in Seiano. Every year he will use the proceeds of the event to fund five charity projects.

Repubblica del Cibo is that part of the festival that focuses on up-and-coming chefs, with over 130 young professionals who, come Sunday June 4 from 6pm onwards will take over the streets of the small town of Vico Equense in unique locations like shops, florists, artisan workshops and newsstands.

Lastly, Tuesday June 7 is “La notte delle stelle”, serving dishes designed by over 100 Michelin star chefs, pizza of master pizzaioli – such as the creations of Pizzeria Da Michele I Condurro, 50 Kalò of Ciro Salvo, Pizzeria SALVO Francesco&Salvatore, Gino Sorbillo, Franco Pepe of Pepe in Grani - and street food. Wrapping up the festival will be the sweet performances of more than 20 bakers among the best in Italy.

How to make a donation

Contributing a donation to the Festa a Vico fund is easy: a simple 20 Euro donation can be made out to the local Onlus points, and grant donors either a choice of 5 sample tastings, a bottle of water and coffee, or  4 dishes paired with a glass of wine, plus water and coffee.

For those interested in joining the charity dinner the minimum donation is 250 Euro. Reservations are mandatory because seating is limited. Lastly, it’s possible to participate in the third evening with a 120 Euro donation to the participating Onlus charity organizations.