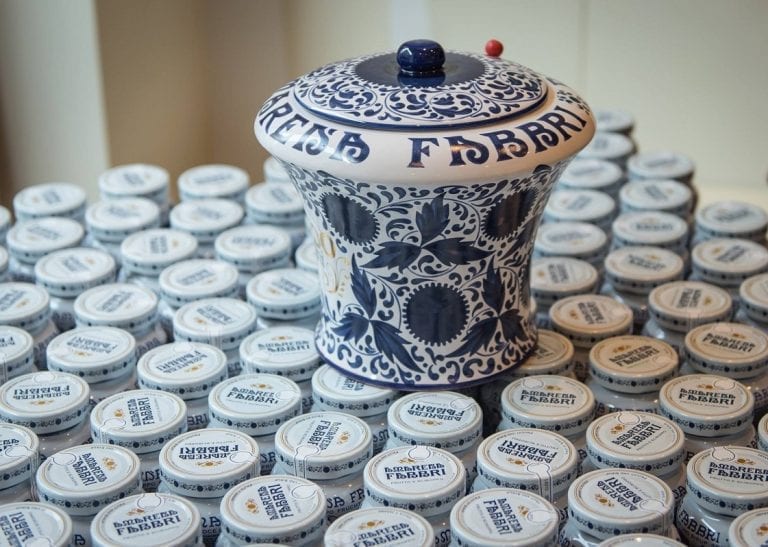 Designed almost a hundred years ago, the famous crock painted with blue floral motifs on a white background contains an equally famous product worldwide, Amarena Fabbri. A ruling of the Shanghai court prohibits counterfeiting, considering "the high reputation of the packaging."

The origins of the Amarena Fabbri crock

The history of the most famous amarena black cherries in Italy cannot be separated from the equally well-known Bottega Gatti in Faenza. It was the 1920s when Emilian ceramics laboratory developed for the first time those blue decorations on a white background that at the time summarised the imagination of a bourgeois world united by a passion for decò and elegant lines. Today, those liberty era crocks that smell of cherry in syrup, stand out in many bars and kitchens in Italy, celebrating the global success of an idea born over a century ago by Rachele Fabbri (nee Buriani), wife of Gennaro Fabbri, founder of the Emilian company. The business of the Fabbri family started at the beginning of the 20th century in the Ferrara area, with the opening of Premiata Distilleria in Portomaggiore, specialised in liqueurs such as Amaro Carducci, Primo Maggio, Gran Senior Fabbri (a brandy aged in Slovenian oak barrels). It was in 1915 that the turning point occurred: the company moved to Bologna, in the building on Via Emilia, and the woman of the house, Rachele, experimented for the first time with the recipe of the so-called “Marena con Frutto,” initially intended for the summer months. It was for Rachele, about ten years later, that Gennaro brought as a gift the first example of the ceramic crock which, inspired by the decorations of Chinese art, was a testing ground for many master potters, from Angelo Minghetti to Riccardo Gatti.

Iconic Made in Italy. Inimitable

Today, Amarena Fabbri – which celebrated its centenary in 2015 with an exhibition in Palazzo Pepoli Campogrande, in Bologna – is famous and exported all over the world. And with it, the unmistakable crock – also in the past exhibited at Moma in New York. It has become an icon of Made in Italy, so much so that it has suffered imitations and counterfeits. But a ruling in China has set an important precedent: the judges of the People’s Court of the Shanghai Yangpu district are responsible for the decision to prohibit any attempt to replicate the crock on Chinese territory, respecting “the high reputation of Fabbri’s packaging.” The design conceived almost a hundred years ago by the ceramists of Faenza (it was 1928, as Davide Servadei, great-grandson of master Riccardo Gatti informs us), is therefore unique in its kind, strongly identifying and inimitable: the typical Asian shape of the crock, with a narrow base and wide shoulders, originally served to guarantee the functionality of the object, usually placed, at the time, on roving gelato carts. The decoration, on the other hand, is indebted to the history of the Emilian territory, inspired by the so-called “porcelain” Renaissance motif (in turn the result of ideas imported from the merchants travelling along the Silk Road), with dark blue flowers on a white background.

The victory of Made in Italy

The ruling was announced only recently, although it dates back to last summer, when the Shanghai court, closing a dispute initiated at the end of 2019, ruled against the Chinese confectionery companies Yi Pai Chocolate and Beijing Jin Mai Xing Long Food, which for their packaging made use of a blue decoration on a white background clearly borrowed from Fabbri. “This ruling is proof that the work done by determined entrepreneurs, supported by Italian and Chinese diplomacy can achieve positive results, and that today even in China, international brands and our Made in Italy are equally protected,” explains Nicola Fabbri, president of Fabbri China (the company has been operating in the country since 2009). The decision is not only a victory for Amarena Fabbri, but also for Bottega Gatti, which in Faenza continues its highly qualified work in handing down the local art of ceramics.