In Piedmont, the “merenda sinoira” becomes an authoritative snack. 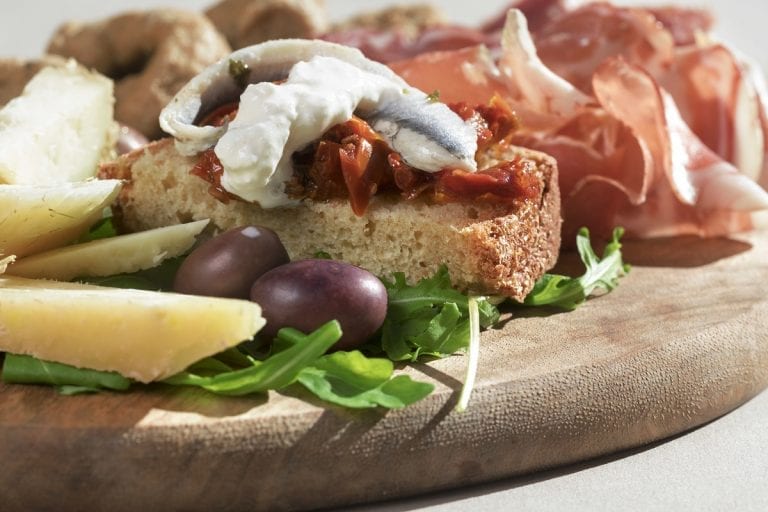 Nothing to do with the “apericena”: the Piedmontese merenda sinoira is an ancient peasant ritual that today returns in a version revisited by great chefs.

Let’s start from the very name, or rather better from that adjective, sinoira, which derives from “sina” that stands for dinner in Piedmontese dialect. Basically its a big snack, almost dinner. A tradition that recalls the peasant Piedmont of the mid-nineteenth century, days spent in the fields, rhythms of work marked by a few breaks: lunch, often consumed in the countryside, without returning home. And then, towards the end of the afternoon, the merenda sinoira – with cheese, salami, maybe an omelette, some seasonal fruit – and a glass of wine. At the end of the 19th century even the bourgeois and noblemen offered the merenda sinoira, especially in summer, in their villas in the countryside.

From that break to refresh oneself from the work of the fields, the merenda sinoira in the Piedmont of the 1950s – until the 80s – morphs into a tasty break to be consumed in the piole – taverns – under a pergola, in the bowling alley, in some trattoria after a trip in the mountains. And it is enriched with good things to eat without the need of “mise en place”, in a convivial way, sharing the same plate: cold meats, anchovies in green sauce, tomini in green sauce or electric tomini al peperoncino, peppers, boiled eggs, russian salad, giardiniera and vitello tonnato, tench and zucchini in carpione . . .

Basically, all the specialties of the Piedmontese pop tradition, and finally bunet, persi pien (stuffed peaches), or pancakes. With a sweet treat or a barbera to go with it. With the arrival of the aperitifs and apericena, the ritual got a little lost. Today it returns in a new key, but without losing its culture, the context of the territory and its history. And without changing name.

They called it a culinary jam session and in fact they are variations of rhythm on the theme of the traditional merenda sinoira. The Castle of Roddi, in the heart of the Langhe, has become a showcase of Piedmontese excellence and headquarters of the Truffle Hub, a virtual laboratory of excellence within the International White Truffle Fair of Alba. From here, on the digital-set, in the castle kitchens, the Merenda Sinoira is reread by the great chefs of 7 Piedmont areas on 10 online culinary shows, which will be broadcast on the digital channels of VisitPiemonte, the regional tourism promotion portal and the Fiera del Tartufo, coordinators of the project involving local tourist agencies, chefs, wine bars, producers and sommeliers in 10 digital episodes from November 30 to December 21. The aim is to revisit the Merenda Sinoira by combining truffles with regional products and great Piedmontese wines.

The 7 local areas identified are Turin, Alessandria, Cuneo, Langhe Monferrato and Roero, Novara, Biella, Valsesia and Vercelli, Verbanio-Cusio-Ossola and Laghi. A digital experimentation that wants to link the excellence of food and the territory, and make them known and appreciated by the public also virtually. Basically making system, according to what now seems to be the magic formula of this complicated period (and not only).

It will be really interesting to discover how many prestigious chefs will revisit the Merenda Sinoira with the right combinations of wine, and without ever losing sight of the territory and its products. Great recognition, digital and contemporary, for a peasant ritual of food born in the countryside, about two centuries ago.

The author’s merenda sinoira is on www.visitpiemonte.com / www.fieradeltartufo.org and on the social network pages on Facebook and Instagram of VisitPiemonte and Fair of the White Truffle of Dawn.