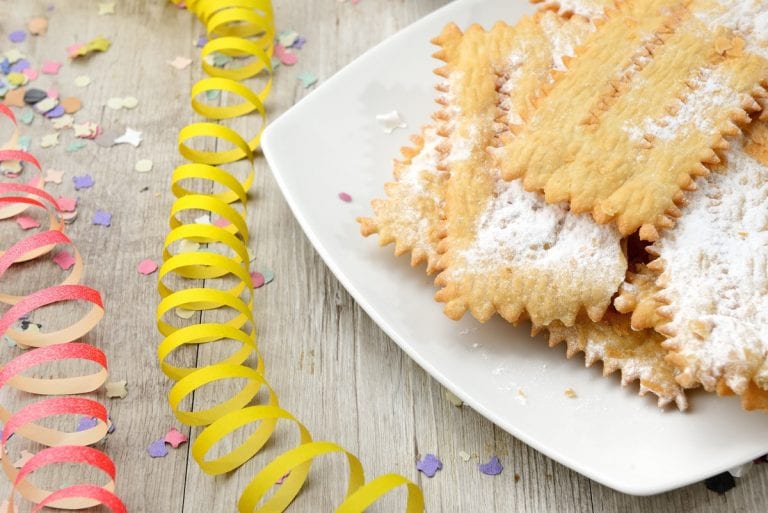 Chiacchiere, crostoli, bugie, cenci, frappe, galani. All descending from a single and unequivocal ancestor, which dates back to the Renaissance. Here is the story of the Italian Carnevale specialty.

Many traditional Italian dishes have a history that often doesn't exceed one hundred years and, at times, even less (think for example of carbonara). Other recipes, more rare, date far back as the 19th century, but often the changes made in the recipe over time are so substantial that they are more recognisable by their name than by the actual preparation.

Many different names, one single origin

There are recipes that have resisted the test of time, maintaining precise and direct references to dishes from the medieval or Renaissance period. Among all, for some reason still to be investigated, pastries and desserts that are now considered genuine specialties of the Italian gastronomic scene have demonstrated a certain resistance to the passing of time. Sometimes they carry different names based on the region they belong to, but they betray an evident common origin.

An example is a typical Italian Carnevale pastry that goes many names: chiacchiere, crostoli, bugie, sfrappole, cenci, frappe, galani––all descendants of a single and unequivocal ancestor dating back to the Renaissance.

The recipe first appeared in "La singolare dottrina" by Domenico Romoli known as Panonto, published in 1560. Apart from his Florentine origin, there is little information about the author, but he is rightly considered one of the great Renaissance gastronomes together with Bartolomeo Scappi and Cristoforo di Messisbugo. His treatise, reprinted again in the 17th century, collects recipes and nutritional and dietary advice according to the fashion of the period.

Among recipes for mostaccioli, sweet pies and biscuits, the recipe "To make Frappe, i.e. balls of struffoli dough" describes the preparation of fritters. Even then it was a specialty of the Carnevale period and the ingredients were simply flour, eggs and sugar. With this dough, a thin sheet was rolled out and sliced in strips and then fried in abundant lard, then served dribbled with honey.

Although Romoli tries hard to describe the final shape of the frappe, it is not very clear what he means when he refers to the "balls of dough" referred to in the recipe title. Perhaps his contemporary and colleague Bartolomeo Scappi also noticed this and in his “Opera” dated 1570 proposed the recipe "To make a dough of which you can make balls & various other creations." The recipe is virtually identical, with the only addition of rose water, salt and clearer instructions.

The process described by Scappi

The procedure consists in rolling out a thin disc of dough measuring approximately 30 centimeters in diameter and carving it in parallel strips of about a finger in width, but leaving the edges intact. Using a stick you lift alternating ribbons and holding them raised this way, you immerse them in a deep pot of boiling lard, so that the alternating strips of pasta remain distant from each other during cooking . The result was a large hollow ball that was then drizzled with honey or dusted with sugar before being bitten into. This bulky fritter must have been particularly awkward to handle, but the scenic effect was guaranteed.

Apart from the elaborate shape, frappe probably also had a slightly different consistency from the current ones, which are more crumbly thanks to the addition of butter in the dough. By comparison, it had to be crisp more or less like the tagliatelle fritters that are still made today in Emilia for Carnevale.

The pastry was also recorded in the late 18th century by Francesco Leonardi in his monumental "Modern Apicius'' with the name of "Flappe." The dough is added with butter and wine giving life to the recipe that is still used today: "Mix eight ounces of flour (about 230 grams), with two eggs, a little butter, a little salt, and a little white wine, making the dough firm is the right thing." In this case Leonardi recommends cutting the rolled out dough into two finger-wide strips and knotting them several times before frying them in lard and sprinkling them with sugar, or with a light sweet icing made with water, sugar and egg whites, the so-called lissè sugar.

The fat and the lean

In the early 19th century the Flappe are also included in "The new economic kitchen," a gastronomic dictionary composed by Vincenzo Agnoletti. In addition to the normal Flappe we mentioned above, to which lemon zest is also added, a rather unusual "lean" version is also proposed, considering that they were typical Carnevale specialties, the "fat" period of the year par excellence. The recipe varies substantially due to the use of only egg whites and olive oil used in the dough instead of butter as well as for frying instead of lard.

Many different names, one single specialty

Each author that follows has their own version of the Carnevale specialty, adjusting the doses and replacing some ingredients from time to time, but above all changing the name. This is how the Flemish fritters of "La Cucina Facile" dated 1844 appear, in which brandy - still present today in some regions - also taken from "Il cuoco Milanese" in the mid-19th century as fritters in the Flemish style is introduced. In the same period Angelo Dubini published the Nastrini delle monache or Gonfioni, followed by the Frappe (intriconi) of "La cuciniera maestra" dated 1884.

Pellegrino Artusi (1891) and "The Silver Spoon" (1950) prefer the tuscan Cenci, while Ada Boni in her "Il talismano della felicità" released in 1927 uses an ecumenical Frittelline di carnevale declaring only in the instructions that in Rome they are commonly called Frappe. Lastly Anna Gosetti della Salda in her "Le ricette regionali italiane" reports four different versions according to regional division: Chiacchere or lattughe in Lombardy, Sfrappole in Emilia, Cenci in Tuscany and Crostoli in Trentino, more gluttonous than the previous ones, judging by the quantities of butter and sugar employed.

Half a millennium of history for frappe

In the course of a history that spans half a millennium, it's normal for a recipe to undergo different influences and be modified according to the territory in which it takes root. With the same mechanism by which a language is changeable and unstable over time, Italian cuisine has been transformed over the centuries to give life to one of the most interesting and varied culinary cultures in the world. However, it is difficult to explain what makes one recipe more successful than others, which tend to be forgotten after centuries of life. In the case of the Renaissance frappe, their survival and widespread diffusion is probably due to the success of the recipe's simplicity, but easily identifiable in the realm of sweet fritters, as an almost unique example of a rolled sheet dough base. A perfect example of how a common heritage can be declined within the various regional cuisines and still remain a Carnevale tradition to be handed down.