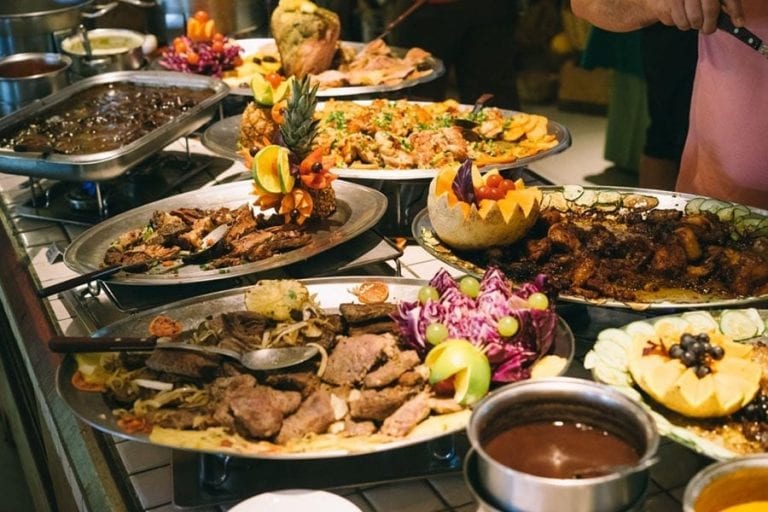 In Rio de Janeiro it’s never too late for a meal: walking in its streets, you’ll always find an open eatery for feijoada at any time of day, same goes for spotting kiosks that sell aracaje, food trucks selling bolinho de bacalhau. If it’s true that Brazilian cuisine is different from the one served throughout South America, same can be said of Rio cuisine. Thanks to its strategic geographical position, Rio de Janeiro has for centuries been at the crossroads of European and African cultures.

The food in Rio is the synthesis of three main currents: the cookery tradition of the local natives, Portuguese tradition and the culinary culture of African slaves. In Rio, this blending of cultures happened seamlessly, with no evident traumas. The African influence has always been of fundamental importance. African cooks were always considered superior. According to Rio citizens, the darker the skin, the higher was the culinary skill.

From Africa hail the broths, the use of coconut, palm oil and the ability of combining fruit and savory foods in the same dish. The Portuguese on the other hand introduced poultry and eggs, bread, wine, sugar, sweets, honey and mostly, salt. Grafted into these, the local natives cuisine which was mostly plant-based and fish. The spices of Rio in particular, are a perfect example of this gastronomic syncretism. The famous Carioca blend that infuses the Brazilian touch to all the local food, is made up of dried carrot, onion and garlic, pepper, cumin, mustard seed, rosemary and coriander, but this blend changes according to area. Here is a shortlist of the best dishes you can order in the streets and restaurants of Rio de Janeiro. 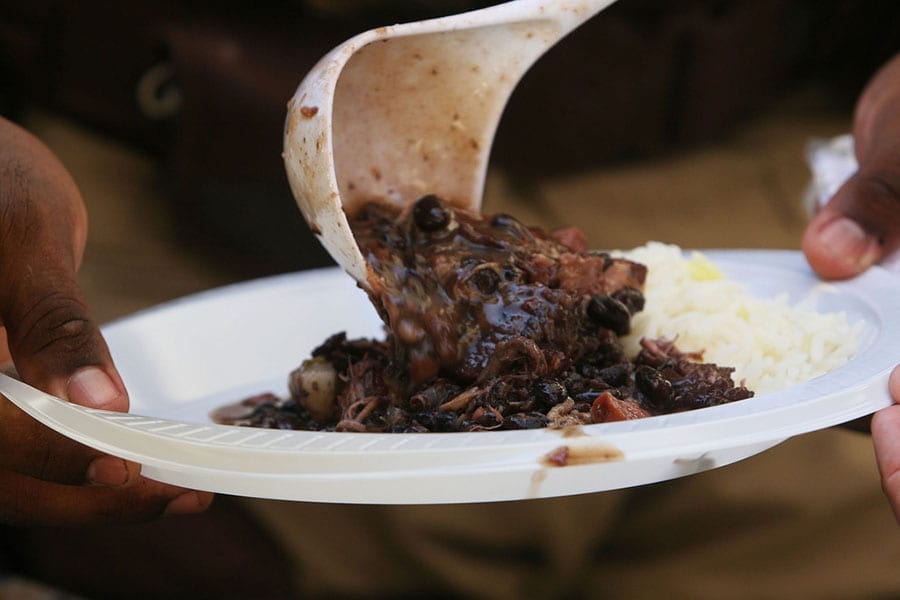 Let’s open with the dish that most represents Carioca cuisine. This is a bean and meat stew that can be èreèared in a number of ways. With the exception of these ingredients that remain unchanged: black beans, cheap pork cuts or offal (tail, trotter, innards, pancetta, lard, ear, sausage), beef, water and spices. Prep time is approximately 12 hours. Meat and beans are soaked overnight and slow-cooked a minimum of 3 hours. A simple yet labor intensive dish which in modern times is often made using a “quicker” method but a shortcut which should be absolutely avoided if seeking true Carioca flavor. 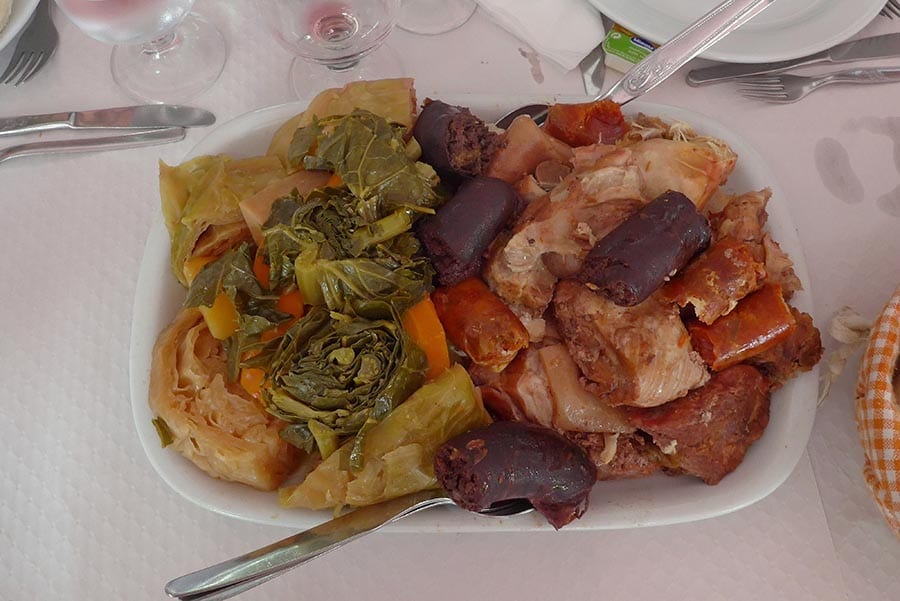 Cozido, or ‘boiled’, is the forerunner of feijoada. Owing its origin from the European custom of slow cooking meat and vegetables, cozido à carioca differs thanks to wide use of spices – in particular the Carioca mix – for the addition of bananas and plantain and other local ingredients such as the Carà and Inhame tubers. The dish is customarily made with adult veal meat, tongue, lard, pork ham and other meat cuts. Eggs are cooked separately with banana and plantain which are added to the boiled meats at the end. The dish is served with pirao, which is creamed cassava, and arroz branco, or white rice. 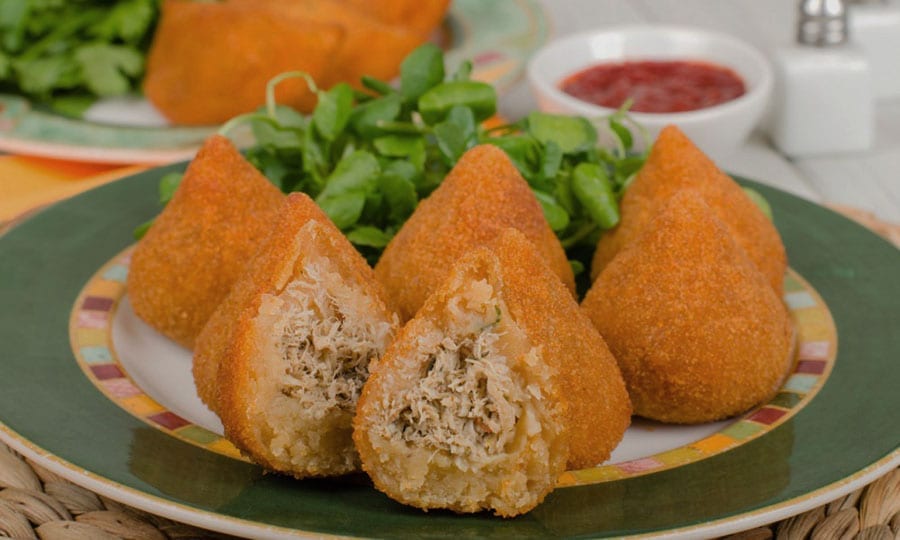 This is a type of croquette/pocket filled with chicken meat, sweet peppers and onions. Legend has it the dish was prepared to please the son of Count D’Eu, Gaston D’Orleans, and Isabella of Brazil, who was the daughter of Emperor Peter II, who loved eating poultry. Preparation is elaborate and often Brazilian home cooks make it and freeze the croquettes raw, ready to fry on the day. For the filling, the boiled chicken is deboned and meat shredded, onion minced, sweet peppers julienned and all is added to tomato puree and parsley. For the dough pockets the ingredients are: chicken stock, milk, butter, all purpose flour and egg yolks. 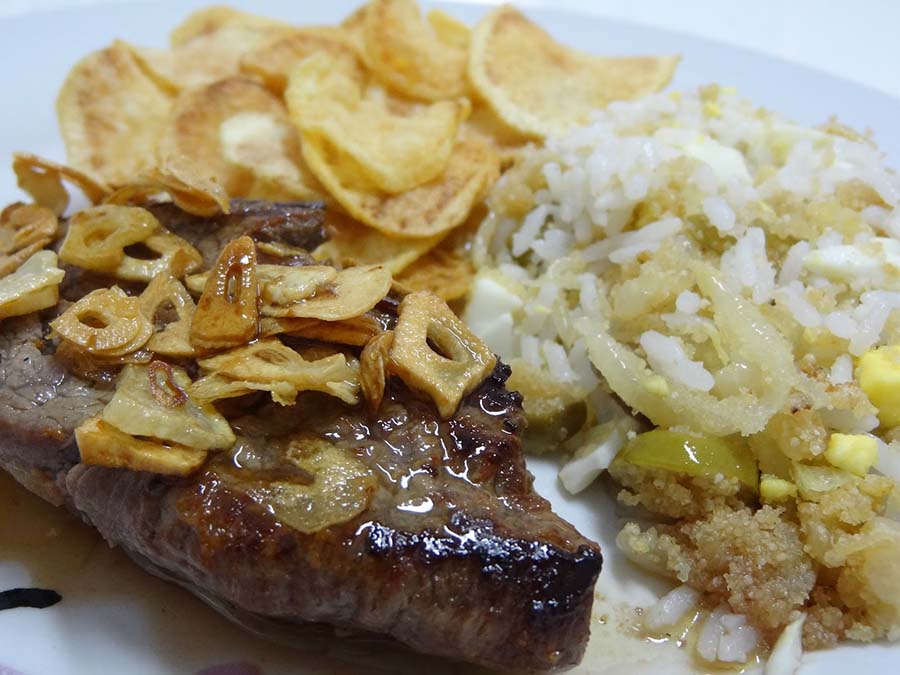 Here is a dish whose name and surname Osvaldo Aranha, honors a Brazilian politician of the 1930s. It appears it was Aranha who first requested a restaurant in Lapa that his filet mignon be added with fried garlic and paired with Portuguese potatoes. In the course of a few decades the dish became a Rio staple, becoming a symbol of the city. Classic filet is topped with fried garlic and paired with a side of potatoes, rice and tapioca, locally called yuca. 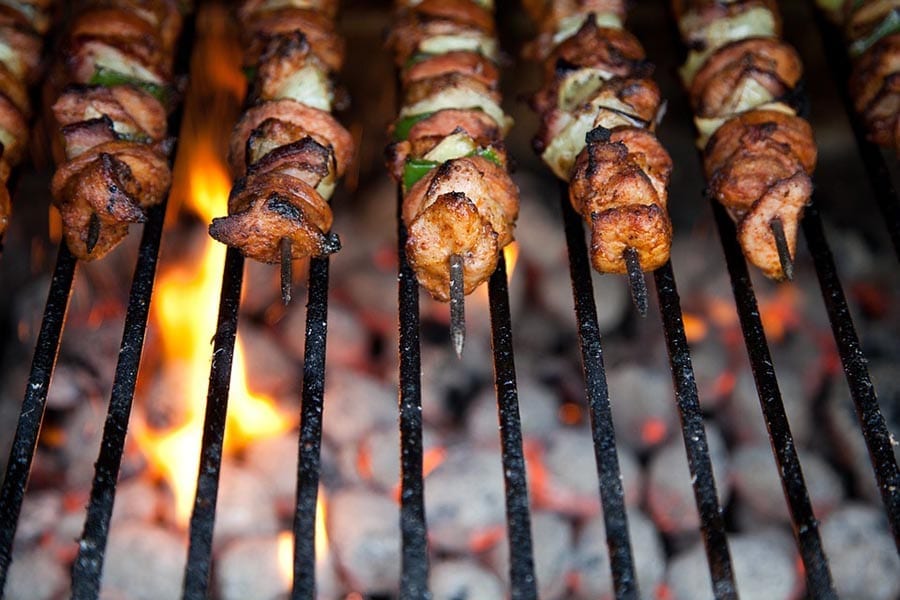 Let’s close the meat section with churrasco. Despite its southern origins, it mostly caught on in Rio. Meats of different cuts are roasted on a large skewer and served sliced off directly at the table. Tradition demands that restaurants serving other dishes besides churrasco, patrons are issued with 2 tabs, a red and a green one. This way the sated patron can lift the red tab to halt the procession of roasted meats otherwise served endlessly. Churrasco meats are set far from charcoal, the goal is roasting the meats by smoking them slightly. The various meats include picanha (triangular carved ox tail), maminha de alcatra (beef cut), fraldinha (beef posterior near the ribs), lombinho (pork loin), coração de frango (chicken heart), costela de porco (pork chops) and linguiça (sausage). Rio’s preeminent fish is cod, often declined as salt cod. Many recipes are made with cod, the most famous of which is surely bolinho de bacalhau, cod croquettes. These are made with cooked cod fillets, potatoes, garlic, onion, parsley and eggs (yolks and 1 white). The salt cod is soaked, revived and boiled. The cooking water is used to boil the potatoes. In the original recipe onion is used raw and added to the cod and potato mix. The mix is then shaped into balls and deep fried in corn oil. 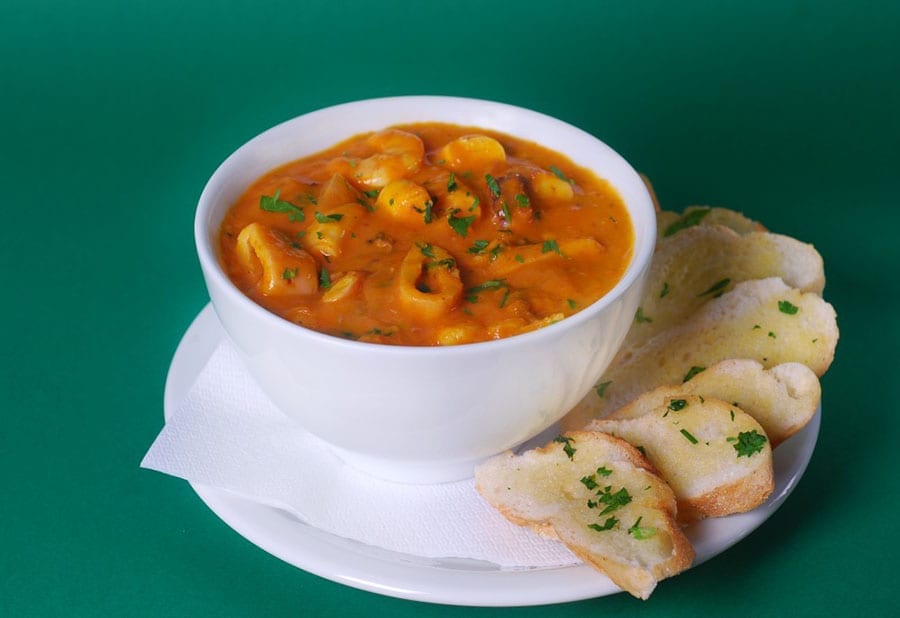 French inspired zopa Leão Veloso is a Brazilian version of the Marseille bouillabaisse: a delicate stew made with various types of shellfish. The broth is made with shrimp heads and other bones, sauteed onion, tomato and ginger. On the plate, besides shrimp are lobster, European spiny lobster, calamari, plus various crustaceans and mollusks. This recipe hails from the north of Brazil, but is famous in Rio including its variations which employ banana and plantain. 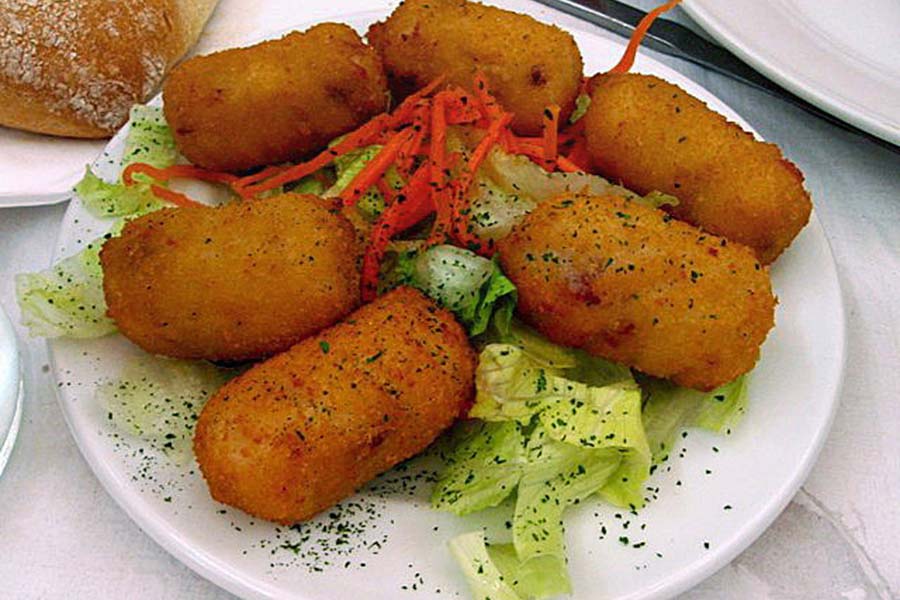 These shrimp croquettes are made all over the country, but originate in the western coast. These dumplings are filled with fresh shrimp, butter, onion, boiled potatoes, tomato, garlic, chili pepper and parsley. Some variations include cheese and olives. The key element of the recipe is the fish stock in which the potato is cooked and smashed to give texture, and which is then added to the filling mix. The dumplings are then coated in egg wash and dredged in breadcrumbs and then fried in corn oil. 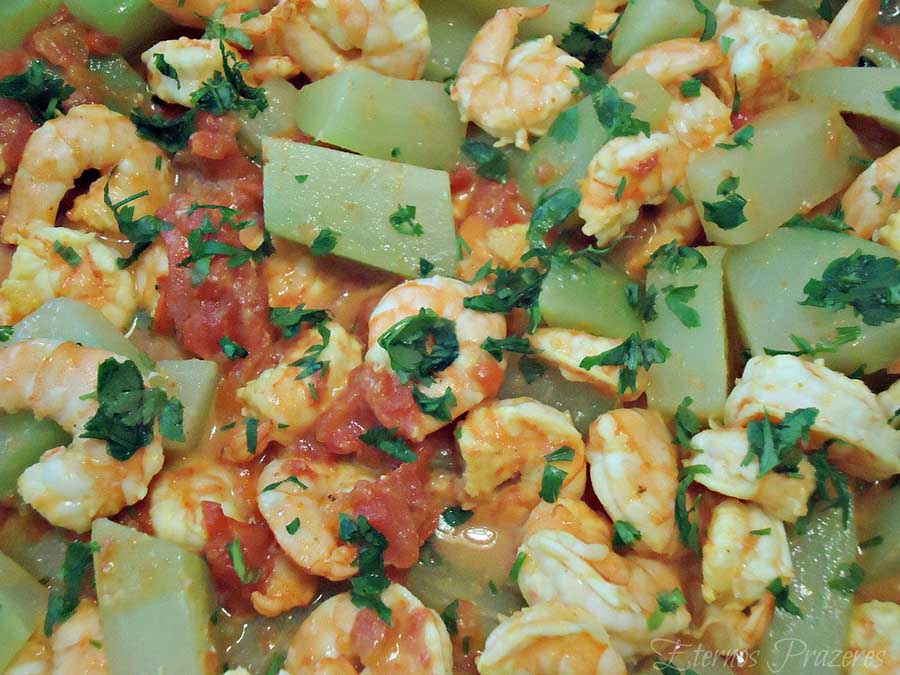 Stewed shrimp and chayote (aka chucu) is a popular dish in the heart of Rio. Chayote squash belongs along with melons and cucumbers to the Cucurbitaceae family and popular in Central and South America. Tradition holds this recipe to have developed in Rio in the XIX century with Portuguese origins and a touch of native flair with the use of local chayote, which was a food widely eaten before the European invasion.

Side dishes and snacks 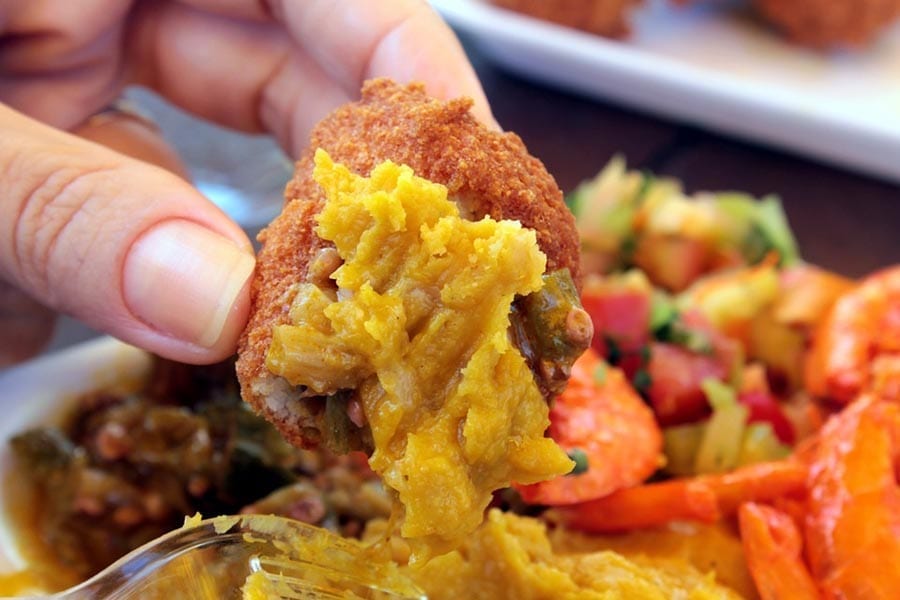 Acarajè’s clearly African origin is contended between Rio and Bahia who both claim paternity. These black bean fritters are actually widespread in the entire central and southern part of the country. They are made with vatapá, a sauce made with flour, peanuts, ginger, pepper, palm oil, coconut milk and onion. This is a snack enjoyed at any time of day, and mostly served as street food or in high end restaurants. 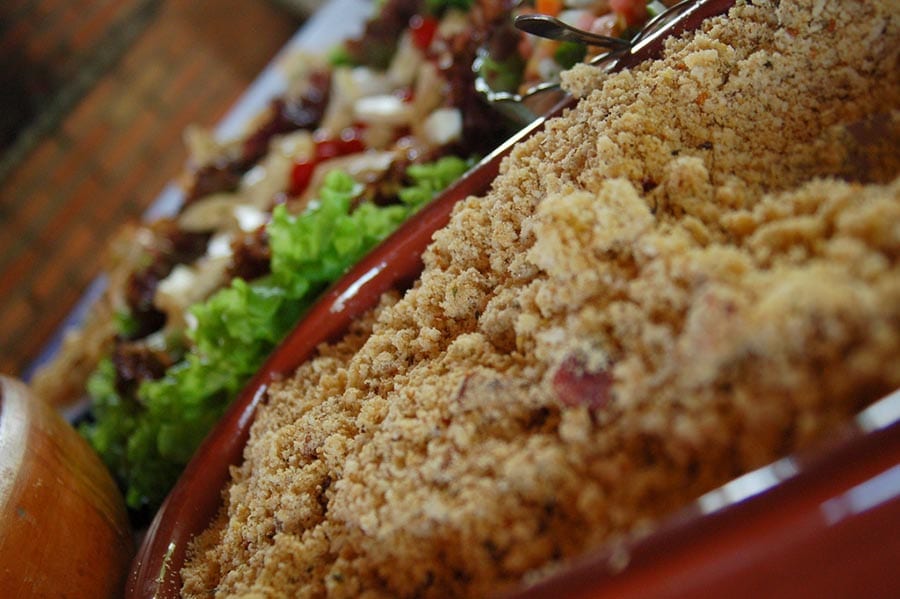 Tuber native of South America and Sub-Saharan Africa, the cassava root or manioc, is one of the most consumed foods in Brazil. It belongs to the Euphorbiaceae family and is reminiscent of the carrot, but the pulp is white and firm. Manioc flour is obtained by the plant and which is employed in a number of dishes, including farofa. This popular side dish is flour based and that can be added with various ingredients like sausages, eggs, onion, tripe, banana, cabbage and pancetta. It pairs fish and meat entrees and is considered a classic worker’s meal. 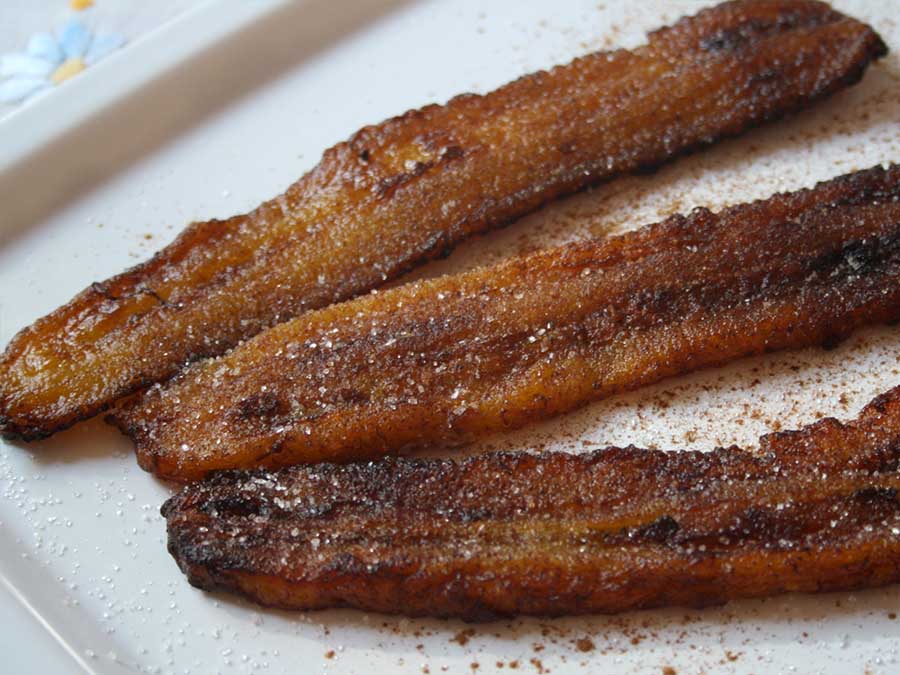 Banana de terra, best known as plantain, is indigenous to the entire South American continent. In Brazil it is widely used on a daily basis. It looks very much the the common banana, but the flavor is very particular: when unripe, it's similar to the taste of potatoes, sweeter and more banana-like when fully ripe. In Rio it is commonly fried (called banana de terra frita) or roasted (assada). 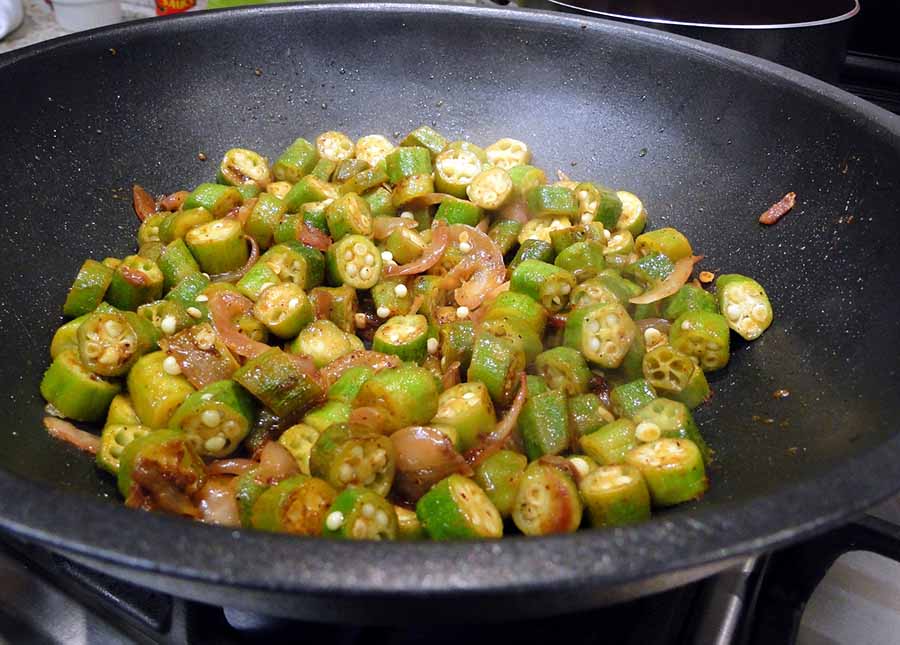 Okra, locally called gombo or quiabo, is a native African plant and greatly used in traditional Asian, African and Latin American cookery. The basic recipe envisions stewing or frying the plant, served with rice and beans as a side to meat or fish, or its gelatinous sauce used to bind sauces. Quiabo refogado, or braised okra, is a dish belonging to the indigenous people of Brazil. The crop is rubbed with lemon and left to rest for 15 minutes to eliminate the gelatinous substance it releases. It is then immediately rinsed, cubed and pan fried with garlic, onion and a glass of water. Sicilian purists may cringe, but bolinho de arroz closely resembles an arancino al burro. This rice dumpling is typical of the Botequim, small Brazilian food shops that also serve lunch. It spread to the rest of the country from South Eastern Brazil, and particularly took to Rio. It is a humble dish, made by employing leftovers: chilled cooked rice mixed with butter, grated cheese, chives, parsley and a teaspoon of yeast. The ingredients are mixed, seasoned with salt and pepper and formed into bullet shaped croquettes. They are then dipped in egg wash, dredged with bread crumbs and fried in corn oil. 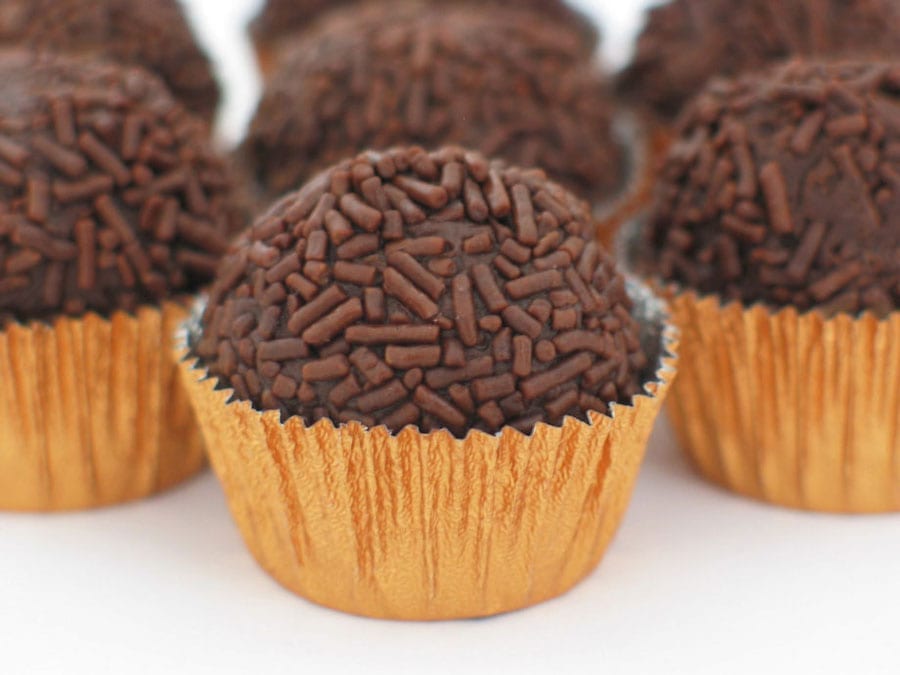 This is a simple and delicious dessert typical of Rio. A little chocolate ball that’s crunchy on the outside and soft on the inside. Created around 1940, it was called “brigadier” in honor of  Brigadeiro Eduardo Gomes, a famous Brazilian political and military figure. The balls are made with condensed milk, dark cacao powder and butter which are melted together over mild heat in a small pan to concentrate. Once cool the mix can be handled and formed into bite sized balls that can be rolled in chocolate sprinkles and served in paper ramekins. 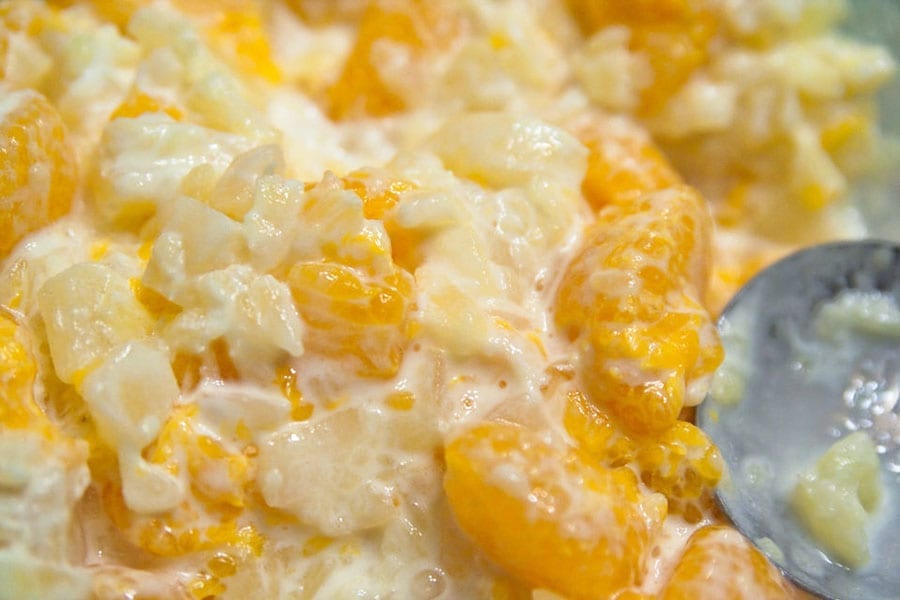 Don’t mistake this for the milk dessert served all over South America, the Ambrosía in Rio de Janeiro is a simple fruit salad made with melon and assorted tropical fruits. Fresh coconut is then grated over the chopped fruit. This is a typical meal ending, especially in summer, both served in Rio restaurants and at home. 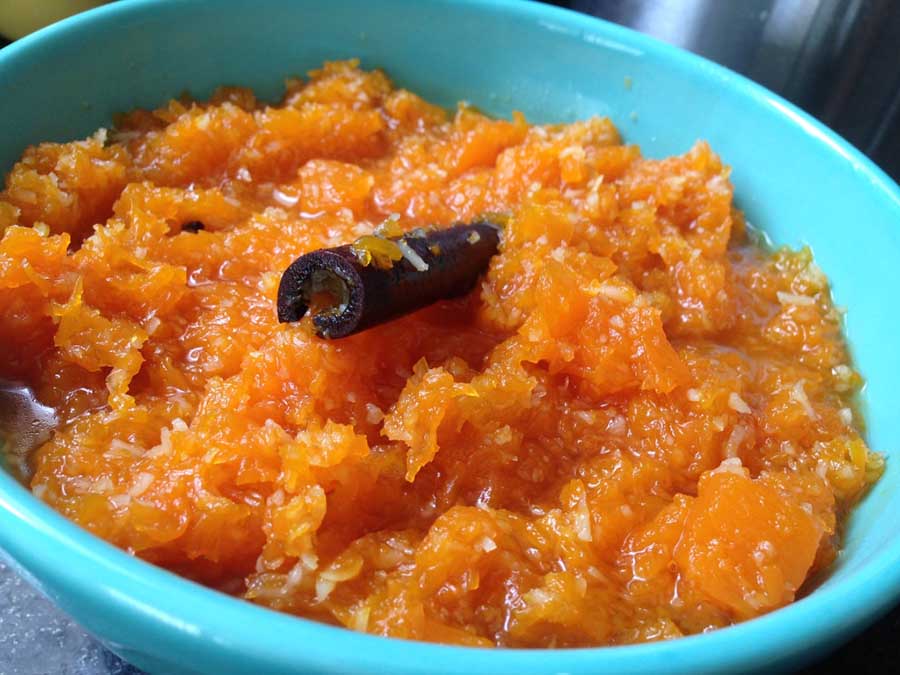 Pumpkin and coconut cake is a typical sweet of the Festas juninas holiday, the June corn harvest celebration. It can be made in two versions: crystallized or in syrup. To make it, pumpkins are peeled and chopped, and cooked in a pan with lots of sugar, cinnamon and cloves. A small amount of water is added to melt the sugar and form a syrup over low heat, stirring for 30 minutes. Halfway through cooking any pumpkin chunks left are smashed with a fork and coconut flour or grated coconut is added. The mix is cooked for further until well blended and creamy. It’s then left to cool and served with queijo branco, which is a simple white curd cheese, or requeijão, Brazil’s typical cream cheese.