Destination Abruzzo. Abruzzo explained to Americans by an Italian blogger She began by telling the Italians about America, but today Angela is committed to making Abruzzo known in the States. With the help of her husband she has devised a digital project that organizes trips and online experiences, as well as selling typical products.

Angela Rapino filled her suitcase 9 years ago, together with her then boyfriend - also from Abruzzo - before leaving for the Big Apple, where she still lives today. Working with her today are her husband and son, a 5-year-old boy who turned around her life and her career. La valigia stellestrisce (the star spangled suitcase), as she calls it, is still there, on all social channels that have become her new job since 2016, a digital space that is first of all "a container of emotions," in which Angela talks about herself and provides advice for aspiring expats who, just like she did, intend to move to the US. But now there's also a reverse project, which talks to Americans about Italy, or rather: about Abruzzo. The land from which she started and with which, during these years overseas, she has forged an ever stronger bond. Telling the Italian about America...

But let's start from the beginning, from that star spangled suitcase. It was 2012 when Angela decided to venture to New York, without support or acquaintances: "We left without even a job. After a while I started teaching Italian to Italian-American kids, but then my son was born and I wanted to dedicate myself entirely to him." Little Giorgio arrived in 2016 and marked what seemed the end of her career, but which actually turned out to be just the opposite: a beginning. Angela loves to talk about herself and on her personal Facebook page she often shared tips and information about life in the United States, "the most beautiful side of that life, but also the most complicated one, the bureaucratic procedures, the permits, the necessary paperwork..." The public page of "La valigia stellestrisce" was born like this, "between one breastfeed and the next," but immediately with a large following. ...and telling the Americans about Abruzzo

Lots of videos, blog posts, "currently on hiatus but I'm going to resume soon," travel tips and itineraries, and then personal stories. While she was talking about America to the Italians, however, Angela continued to develop an increasing sense of belonging to her native Abruzzo, "this is how it happens: you leave home and you begin to feel homesick for all those details that until then you had taken for granted." A region that's still little known in the United States, "I initially worked in a supermarket and always wore the "presentosa," the traditional jewel of Abruzzo. Many ladies, intrigued, would ask me where I got it and none of them had ever heard of Abruzzo." Thus started the Destination Abruzzo project, an online platform for communication and promotion of the territory, but also for the sale of typical gastronomic products and travel planning, a site created together with her husband Pietro Di Tillio, a geology graduate from Pescara but with a passion for mountains, "our symbol is a presentosa with two hearts connected by an arch, representing sea and mountain." Angela is from Francavilla al Mare, she prefers the beach, but she loves every corner of her land. 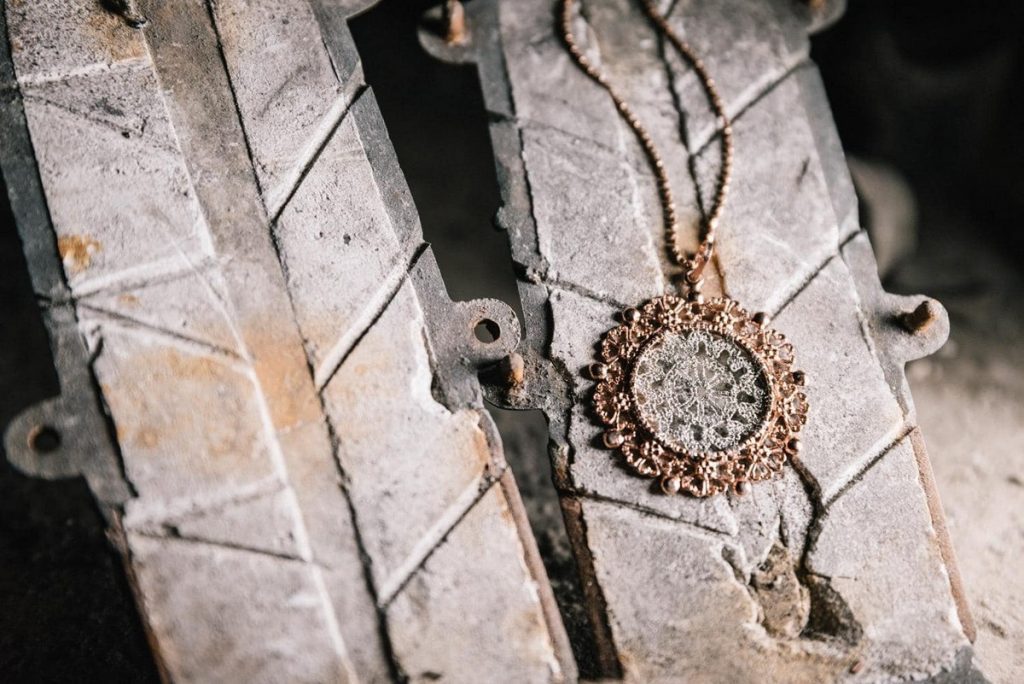 Of course, the timing was not ideal: "We started Destination Abruzzo at the beginning of 2020, the idea of ​​travel immediately came to a screeching halt," but the couple went ahead with online sales, "mainly food, but also jewels," as well as online experiences, starting with cooking lessons, "pasta alla chitarra, ravioli, all Abruzzo specialties." The goal of the travel planning, however, remained: "We want to organize small groups, of 10/12 people max. We like to share a slow tourism philosophy and we are making arrangements with local wineries, farms, museums and shops for guided tours." Itineraries are therefore dedicated to the discovery of the most authentic side of Abruzzo, with its simple products and the most ancient craft traditions. Food certainly plays a fundamental role as protagonist of Destination Abruzzo. Angela's favourite? "Arrosticini! But also pallotte cacio e ova and the pasta alla pecorara." Ancient flavours that the Abruzzese blogger rediscovers on every trip to her homeland, and that she carries in her heart upon returning to New York, along with homesickness. "Only those who have lived abroad know what this means. Everyone asks me if I'll ever return to Abruzzo, and that's the question I ask myself most often too. For the moment I don't know, but in the name of the project we wanted to see some hope." It is said that there is a time to leave and a time to return, but you know, some trips last longer than others. Sometimes, however, the "destination" is precisely home.