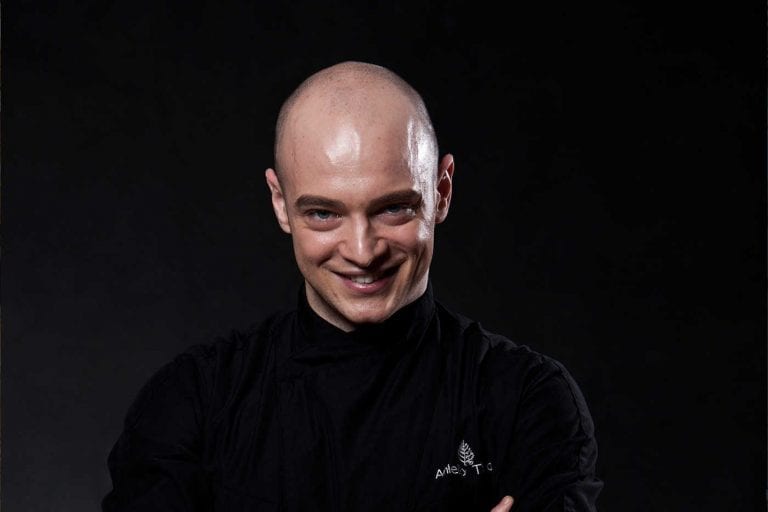 Nello trained in the Trussardi restaurant kitchen in Milano, survived a period with Alain Ducasse, worked with for two years with Heinz Beck at La Pergola in Rome and another two with René Redzepi in his Noma, in Copenhagen.  Today, Nello Turco leads a team of nineteen at Mio, the restaurant in the Four Seasons […]

Nello trained in the Trussardi restaurant kitchen in Milano, survived a period with Alain Ducasse, worked with for two years with Heinz Beck at La Pergola in Rome and another two with René Redzepi in his Noma, in Copenhagen.  Today, Nello Turco leads a team of nineteen at Mio, the restaurant in the Four Seasons Hotel in Beijing that won a Tre Forchette Tricolore in the Gambero Rosso guide, Top Italian Restaurants. And he isn’t 30 years old yet.

“I left Naples very young. I was obsessed by cooking. I worked even when I was at school. I liked kitchens better than discotheques.” Nello is ambitious, sure of himself, creative.Offering authentic cucina Italiana in China is a challenging business, he told us. Until a few years ago, the only mozzarella arrived frozen.   “I asked the Italian embassy and the Chamber of Commerce for help to make some Italian products more available, but the problem became political right away. I have to adapt and I try to create a true Italian experience. I try to transmit Italian culture and passion.” The result is stimulating, not exactly what you expect in the restaurant of a grand hotel. He knows how to be daring and unexpected, drawing from southern Italian culture, but also from cooking techniques from northern Europe, including those of fermentation. “That is something alive that measures the natural flow of life. For example, my grandmother’s sourdough starter is 40 years old. It’s more important to her than the cat that lives in her garden. With my fermentations I try to evolve Italian taste, in a certain sense. It is an extremely natural technique which expresses the evolution of an ingredient, completing its life cycle. An apple comes from a flower and becomes a fruit, ripens as a fruit, then falls from the tree and begins its transformation with fermentation. At this point, flavor is at its peak, and this is when I like best to work with it, control it, transform it.

” For example, his black cod, one of the best dishes on his menu, has overwhelming intensity, acidic peaks and clean, clear contrasts. The fish is cooked at a low temperature. Condiment begins with a study of the local range of soy sauces. A cereal, either rice or wheat, is injected inside and left to ferment for four days until it forms a white patina. A second fermentation begins to increase acidity and consistency. “We obtain a liquid with a flavor that doesn’t resemble any element tasted before. It is a new flavor to which I add Sicilian bergamot and butter. For balance, I add shavings of dehydrated bell peppers to the fish.”

Next to Nello in the kitchen is Paolo Belloni, sous chef at Mio, another young world traveler. His sfogliatelle are an instant trip back to Italy.“Like many of my colleagues, I chose a difficult path, bringing Italian style, including all the most typical foods of our beautiful country, around the world.” We ask Nello about his future. “I want to return to Italy. We are Italy’s future, those of us who are working abroad to enrich ourselves not with money, but with culture. I am already working on a project that will be modern, but a little difference from what’s been seen before,” he promised.