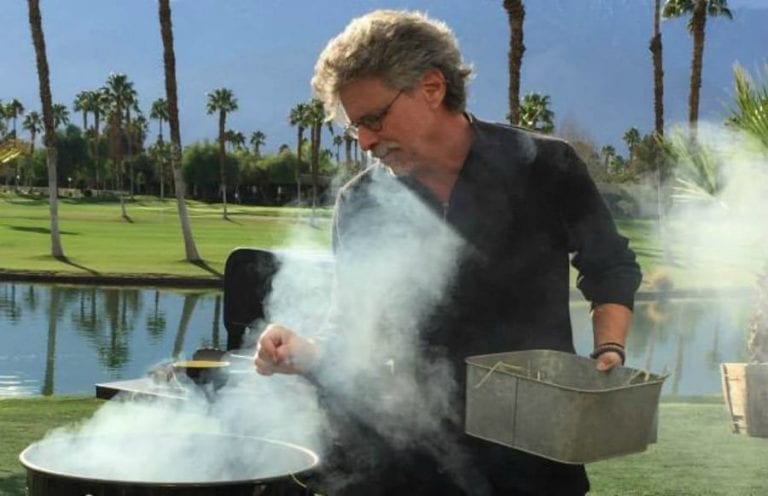 The guru of barbecue in America and beyond for the past 20 years. Steven Reichlen has been contributing to the growth of grilling culture and fine dining in America. His TV shows, books and teaching seminars are proof of this.  He is now ready to land in Italy with his own new and original show.

There’s no one way to introduce Steven Reichlen, the American king of the grill who has completely revolutionized the concept of barbecue. He is a professional chef, ex food critic, TV star – but first and foremost, a passionate food lover. His mantra is food quality, prime ingredients and development of innovative grilling techniques. He is a fine speaker, promoter of the grilling ritual and spokesperson of the northern and southern American fire-grilling. “It all started with a degree in French literature, a wrong life choice which, 20 years later, proved to be the right one”.

Born in 1953 Nagoya, Japan and raised in Baltimore, Maryland, Steven studied Medieval French poetry and through this study program learns of the ancient culinary traditions of the Middle Ages. “From that moment, I understood how deeply the interaction between food and culture was”. That’s when he begins to develop an increasingly stronger interest towards food. He starts working as a restaurant critic, starts visiting all the best restaurants, studies wine and – mostly – approaches the art of cooking  “One day I was told I could never make a living writing cookbooks, so I naturally started writing cook books”. His determination is what brought him to his current success “My first book was The Barbecue Bible which went on to become a world bestseller”. Why?“It was simply the right book at the right time”. It was 1998, a time during which America  was all about fast food and mediocre cookery, low grade ingredients and carelessness in preparation. “It took me a while to write it, but at the end all the hard work paid back. Until then nobody ever imagined grilling as a sophisticated cooking medium”. The step from publishing books to television was a short one, “After that immediate success I asked myself, ‘There are so many projects that can be developed with grilling’ TV shows, websites, schools”. And that’s exactly what he did. All of it.

“I was in Montreal 8 years ago promoting the French language version of The Barbecue Bible. That’s where I met a TV producer who asked me if I was interested in my own barbecue show”. There have been three seasons so far, “and I’m going back to Montreal next week to start filming season four”. The show airs in the US and in a number of European countries. The experience is a unique one, it has allowed Steven to quickly become a public figure: “I was initially terrorized. I still remember the first day of filming: 3,2,1 action... And I was so tense no sound  came out”. After the initial camera-shyness, he acquired more confidence and now spends more time in front of the lens than in his kitchen, filming a number of television shows. 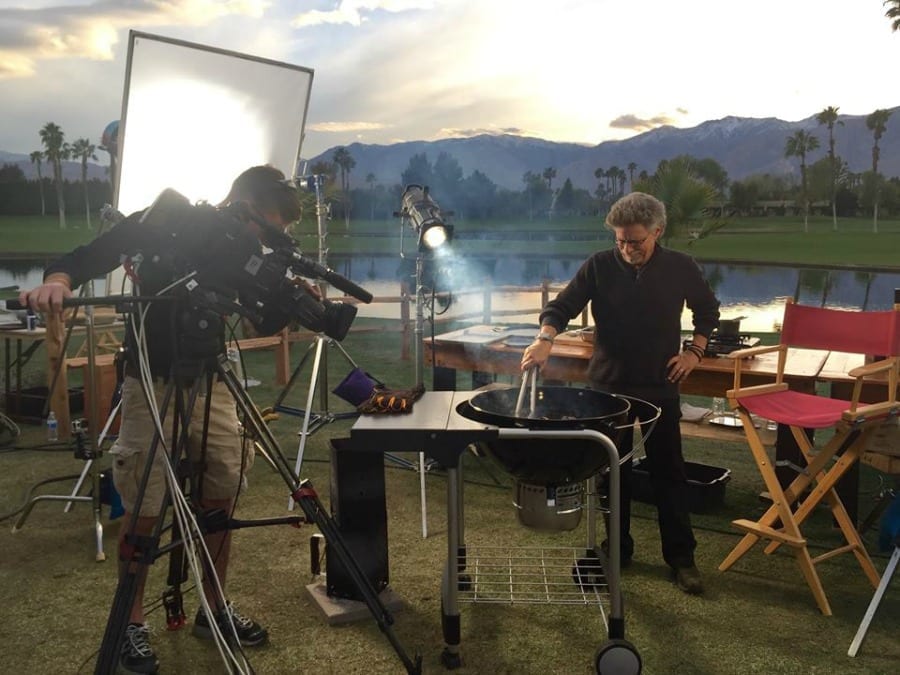 “My primary work is still writing. Aside from cookbooks, three years ago I penned a novel ‘Island Apart’, which is the story of a man and a woman who find self-meaning and love through food”. Steven has also written about spices of Latin America “For years we Americans have had not much to be proud of in terms of cuisine. Then we discovered that in the South there’s an articulate history dense with tradition, recipes, ancient dishes and enviable typical specialties. This way, areas that did not have a historic culinary culture began boasting one. Take Miami, for example. There is a new generation of chefs there that have laid the foundations for a local food history. From the observation of this cane the desire to explore Latin American cookery. I did this via the book Healthy Latin Cooking”. Barbecue remains the central focus and the author-chef is already launching a new book next month.

It was only natural for a passionate connoisseur of this calibre to pass on his knowledge to young aspiring cooks. At Broadmoor Resort, in Colorado Springs, Colorado, is Barbecue University, a school where Steven teaches students how to barbecue like a pro. “It’s like summer camp, where students share communal areas and attend theory and practice classes. At the end of the course students take an exam and must present a paper on a topic of their choice”. Students come from all walks of life and belong to every level of cookery knowledge, from pros to passionate amateurs, and mostly of every nationality. The next step? “Create a Barbecue University in Italy, maintaining American techniques and traditions yet using local ingredients”.

The bond between Americans and the grill is deep and strong, but what does this ritual represent in the New World? “There are two main schools of thought: classic American barbecue, diffused mostly in Latin America – assorted slow cooked meats at low temperatures, depending on the nation”. In North America tradition instead includes large use of various sauces “We call it barbecue but in actual fact it’s grilling, which is very different. You can cook anything on the grill, from meat to dessert”. Barbecue, grill and smoke: “One of my books is Project Smoke which talks about smoked foods, which is a whole other concept”. 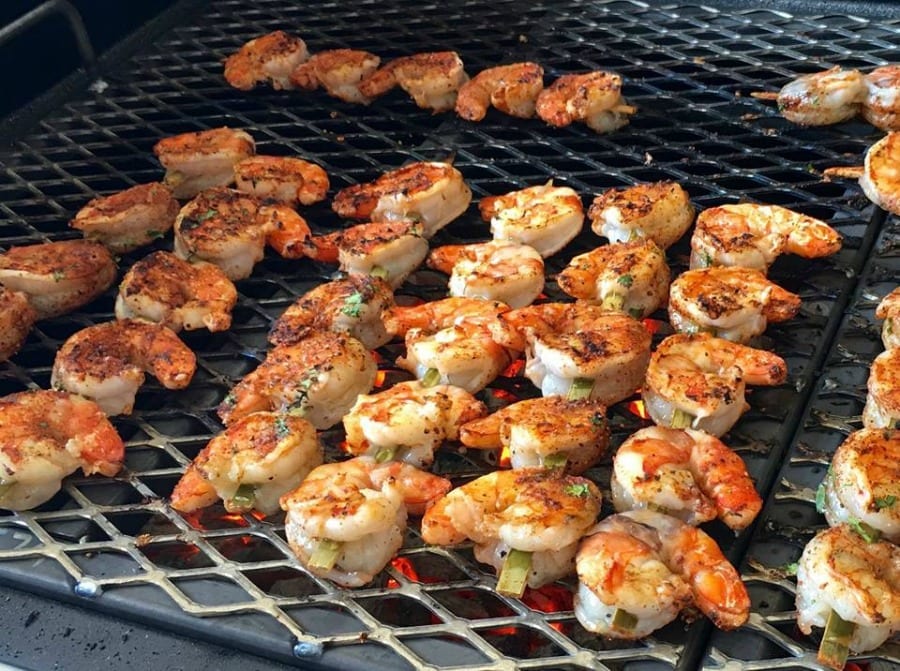 How has the idea of barbecuing changed over the years? “When I was a child, you’d grill or barbecue once a month. Now we’ve increased this custom to three times a week. It is no longer something reserved for special occasions rather something totally habitual”. In time, fortunately, also the meat has changed: “Until the Fifties, meat cuts were good, but from the second half of the 20th century up to the early 2000s products were all industrial and of scarce quality. Americans thought that the type of cooking could cover aromas and flavours and so it was not necessary to invest in quality meat”. Nowadays there’s greater attention both in North and South America. Steven only uses grass-fed, “seasonal” and organic meat, wild-caught fish and “never farmed”. His attempt is promoting these principles in a country that’s “schizophrenic, home to McDonald's as well as Farmer's Markets, with two opposite types of consumers”. 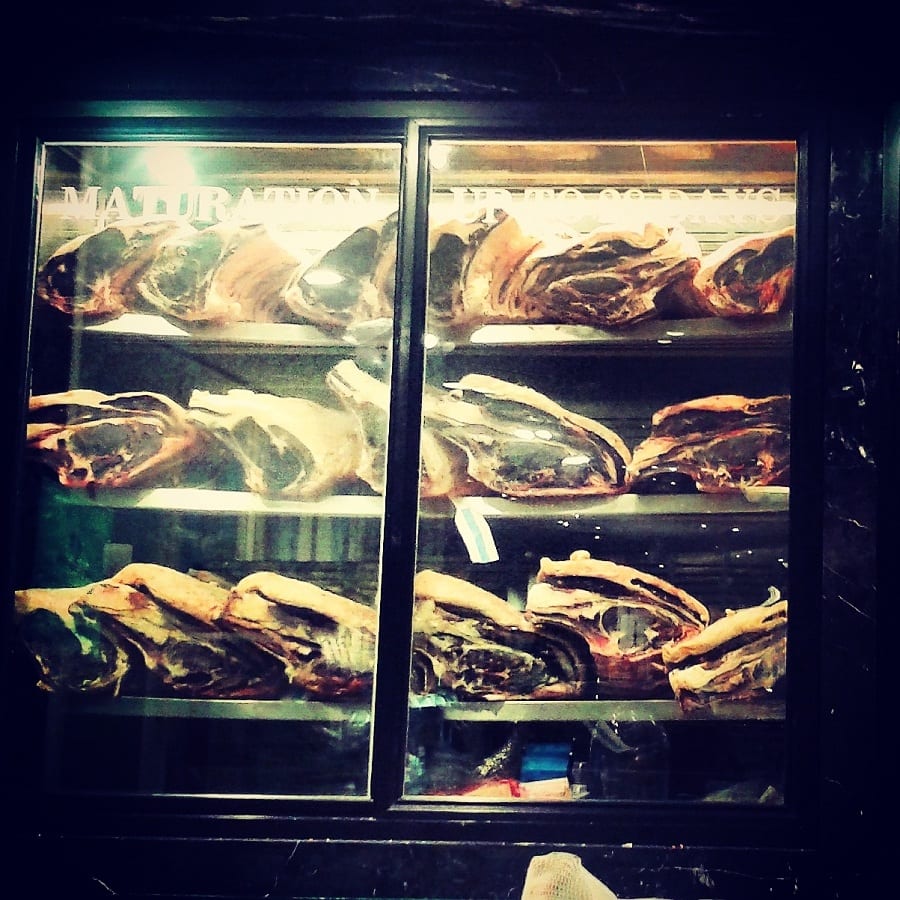 Italy has a strong barbecue and grilling tradition, it’s only a little less known. “I knew about the renowned Florentine steak, so when I started learning about grilling I travelled to Tuscany to try it”, but that was in the beginnings, the turning point for Steven happened in Basilicata: “When asking around for info on barbecue in Italy, the majority of locals will tell you this tradition doesn’t exist. This is not true, it’s only partly invisible”. He continues: “Walking around small villages of Basilicata I saw an astounding number of quality butchers. The grill is indeed used, it’s a homespun tradition, less so in restaurants, but it does exist. It is exquisite, especially the horsemeat tradition, for us Americans is very unusual”. From his travels in this part of southern Italy is the inspiration behind Steven’s latest project.

The show on Gambero Rosso

“I thought: why not discover Italian barbecue culture with the help of local artisans, exchanging advice and information?”, and that’s exactly what he did. A friend puts him in touch with director Stefano Monticelli working with Gambero Rosso Channel (number 412 on the broadcasting Sky platform). After a few emails the two finally meet and with the Gambero Rosso team, spearheaded by Bianca Perugia, the grounds for the new show are set. “My intention is involving butchers, fishermen, cooks and passionate consumers in various areas. Asking them to introduce me to local products and traditional methods, and then showing them  my own interpretations of those ingredients, thus bringing my idea of barbecue to Italy” yet always respecting the local taste and tradition: “Italian cuisine has its roots in ancient tradition and I have no intention of overturning them. I want to use Italian ingredients, cook them in my own way while never distorting local flavours”. He promises to astound us: “I can’t wait to ‘bake’ a crostata or a pizza on the grill”. What Italian restaurants does the American king of the grill love? “I still have not been to a place I didn’t like”. His favourite places are traditional: “Every time I come to Italy I go for classic dishes. I fit the tourist stereotype, I realize this, but I honestly prefer a well-executed plate of cacio e pepe over molecular cuisine”. Steven  however did visit Osteria Francescana of Massimo Bottura, “excellent”, and Piazza Duomo of Enrico Crippa, “a unique sensory experience”, but his favourite dinner was in Rome at Checchino dal 1887, “the oxtail is phenomenal”, Roscioli, “amatriciana, carbonara and a masterful cacio e pepe”. Eating authentic dishes, tasting ancient flavours, “is what’s missing in Boston, New York, San Francisco and in Miami”. His favourite regional Italian cuisine? “Sicilian and from Basilicata. Noto is an enchanting place as well as Siracusa, where I enjoyed fantastic grilled seafood”. When fellow travellers ask Steven for a travel (and dining) tip, he will always mention Como, “perfect to relax and enjoy some peace and quiet”, also passing by Tuscany, “especially the Chianti area”, Rome and then go South, “home to some of the most varied and interesting cuisines, as well as one of a kind ingredients”. There are still many places to visit and explore, because, “I have the net sensation that you can spend your entire life visiting and eating around Italy discovering something new”.

Italian TV aside, Steven is also working on other projects: “Next week I start filming in Montreal, I’m launching a book and thinking of a new volume called Project Fire, along the lines of Project Smoke but cantered around the grill”. There will also be a book on his experience in Italy, “probably in Italian, but I’m still thinking about that. I’m studying the language, but it will take time”. The dream is bringing the school to Italy, as well as exporting the Gambero Rosso TV show format to Spain and Germany, “two countries with a rich barbecue tradition, equally hidden yet well established”. How about a restaurant? “I thought about it but I would not open one by myself. If I found suitable partners, serious and knowledgeable like me, I could maybe hand them management and production…”. Maybe one day, but in the meantime we eagerly await the television show, the first in Italy...