Amatricianae – 33 chefs for the reconstruction of Amatrice The group gathers creative and inspired aficionados who offer variations of amatriciana that scope a portable version and a sweet rendition, plus risottos, sauces and vegetarian interpretations of amatriciana. All 33 great chefs selected by Alma pay their respects to the Italian dish with a cult following as well as to the history of its birthplace, Amatrice. The town is coming alive again and relies on our help. Proceeds go to relief funds gathered for the reconstruction.

Amatrice, 12 months after the earthquake is now in bookstores. On the shelves a cry of hope raises from the rubble of the Lazio town destroyed in the August 24 quake thanks to the dish that most represents the town: amatriciana. The dish embodies the bond that ties together both geography and that pastoral tradition that the earthquake could not annihilate. From a plate of amatriciana restaurant owners animate the new “Villaggio del cibo” charity project promoted by Stefano Boeri. A total of 33 great chefs tackled amatriciana under the Casa Editrice Plan Marche publisher, a region also strongly affected by the earthquake. The call for action also reached the Alma cooking academy in Colorno. Supervising the editorial project along with the publisher is a number of Alma docents. Amatricianae, the title of the book, will be released in bookstores and online soon. The recipe book brings value to the traditional dish through the various chefs’ interpretations. We’re equally proud to report that for the occasion, nobody forced his or her personal and biased interpretation of the traditional cult dish, contrary to past controversial debate. Proof of this is the fact that the City Council of Amatrice was an active part of the project. Mayor Sergio Pirozzi penned the preface, underlining how proceeds will all be forwarded to the reconstruction efforts of Configno, a greatly affected area of Amatrice. The joint work helps the final outcome: an unusual collection of amatriciana variations, that amatriciana lovers will enjoy. History and origin of the original recipe is long, complex and matter of on-going discussion.

Amatriciana for every palate

The chapters of the book help readers make clarity in the different amatriciana recipe schools of thought. There are steadfast traditionalists and more creative types; there are inspired alternatives, white amatriciana and portable versions, such as the amatriciana taco, or the amatriciana arancino. There’s an amatriciana made with fresh water fish, a leafy one that finds its roots in the vegetable garden and even a sweet one with fried spaghetti and caramel guanciale; or rigatoni pasta that become like cannoli, filled with ricotta and pecorino. More than a simple collection of recipes, the project is rather “an original journey through the history, characteristics and curiosity surrounding amatriciana”, as supported by Enzo Malanca, President of Alma cookery academy, in his introduction. The docent essays and their cultural enrichment further support the narrative. “The ingredients are the words with which the geography describes itself”, says Davide Mondin (certified product expert) examining the ingredients; “food is the representation of the place it comes from”, continues Fabio Amadei in describing the relationship between soil and product. But for Luca Govoni, who focuses on the historical context of the recipe, food is also the result of trade and cross-cultural mixing, thus becoming an identity manifestation that’s influenced by time and space. The dissertation of Andrea Grignaffini on the onion yes, onion no dilemma brings readers on the journey of amatriciana from the mountains and pastures of Monti della Laga to the comfortable bourgeois homes of the city at the turn of the 19th century. This is the birth of the all-Roman matriciana, which can envision the added use of onions in the ingredient list. Regarding Rome, Luigi Salvi ­is the chef restaurateur from Configno who left his hometown headed for the big city years ago to teach Romans to make proper amatriciana. He lends his recipes for white and red to the editorial project, plus an interview filled with suggestions and daily life vignettes in the history of the Trattoria delle Corse restaurant, located on the via Appia Nuova. Lastly, the poem by actor Aldo Fabrizi, who dedicated to the amatriciana a famous “love letter”.

Maestro Gualtiero Marchesi opens the volume with his version called Insieme, mixing rice and pasta in a traditional and creative rendition. Each add their personal touch to the classic recipe, like Massimo Bottura, who adds balsamico and Parmigiano Reggiano, or Davide Scabin, who cooks it in a pressure cooker. The elegance of Enrico Crippa’s tomato less amatriciana, and the stuffed versions created by Ernesto Iaccarino, Stefano Deidda and Angelo Sabatelli, who adds foie gras to his filling. Among the most creative is, Carlo Cracco, with his marinated egg yolk spaghetti, Stefano Ciotti, with onion tempura served with pecorino and guanciale sauce, Antonia Klugmann, and her smoked risotto with tomato and guanciale. Pasta disappears altogether in Paolo Lopriore’s version, becoming simply an amatriciana sauce dabbed over a veal chop. Moreno Cedroni employs sturgeon in his seafood version of amatriciana, and Pietro Leemann creates a vegetal version with his “A thought for Amatrice”. Lastly the sweet renditions of Loretta Fanella inspired by the sense of place behind her “Fior di Ciliegio”. Pierluigi Gorgoni designed wine pairings; photos are by Arturo Delle Donne, while the art print on the cover is the work of maestro Ugo Nespolo. Published in two languages, Italian and English, the book is a leisure time read, also entertaining and informative reflection on Italian cuisine. We’re sharing three excerpts from Amatricianae, but first, an alphabetized list of participating contributors: 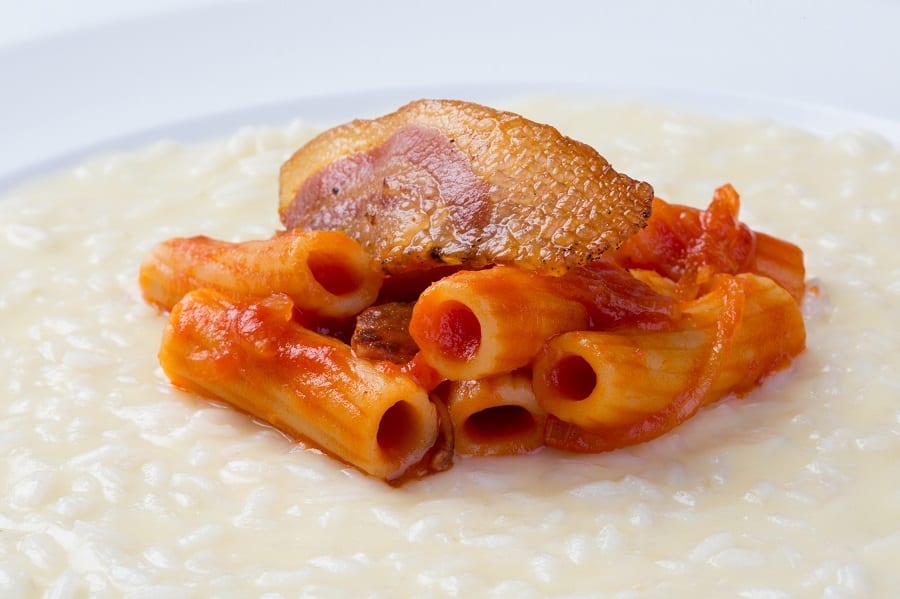 Plate some rice on the bottom of a flat dish. Place 7 rigatoni vertically at the center of the plate on the rice. Garnish with the strip of crisp guanciale.

Smoked risotto with tomato and guanciale 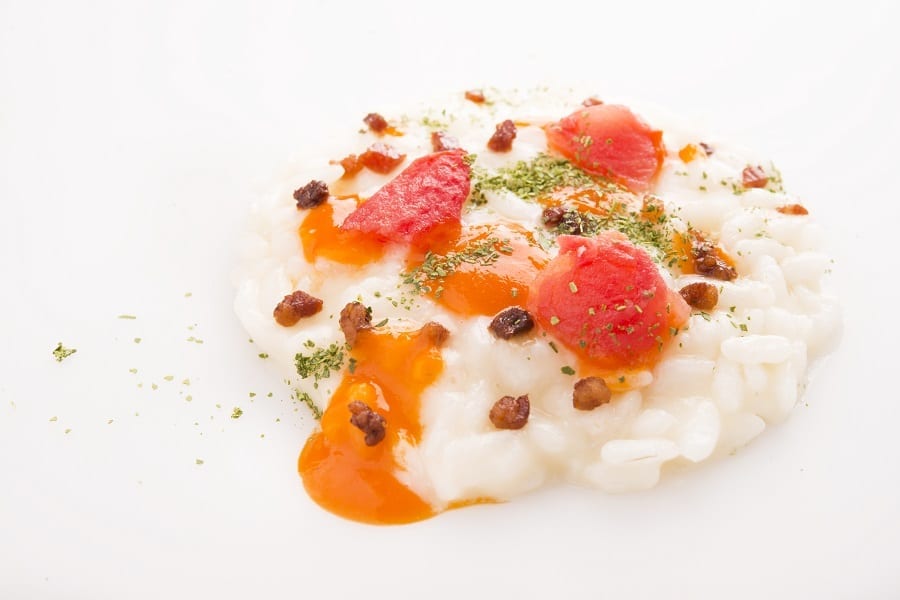 For the rice starch

Blend 50 g of rice to a fine powder

For the powdered bay leaf

Dry the bay leaves and pulverize them.

For the tomato sauce

Brown a clove of garlic with olive oil in a saucepan. When the oil is heated, add the chopped tomatoes, the onion, peppercorns and cook until done. When the sauce is cooked add the basil leaves, steeping them for 5 minutes. Adjust seasoning and puree through a food mill.

For the peeled tomatoes

Blanche the datterini, chill them in ice water to shock and peel them. Add the peeled tomatoes in sterile glass jars, season with a thread of olive oil, salt, a garlic clove and a basil leaf. Seal the jars and cook en bain marie for 15 minutes. Cool until the lids create a vacuum.

Fry the guanciale and remove the rendered grease.

Toast the rice with a thread of olive oil and salt in a pan, add wine and let it evaporate. Wet with boiling water and add a Tbsp. of rice starch. Cook for 10 minutes. When the water isfully absorbed, remove from the heat. Using a cold-smoker, smother the rice for 5 minutes, covered with plastic wrap.

Place the pan back on the heat, once hot remove again and incorporate butetr and pecorino. Add some tomato sauce and serve each portion with a couple of peeled tomatoes, bay leaf powder and crispy guanciale. 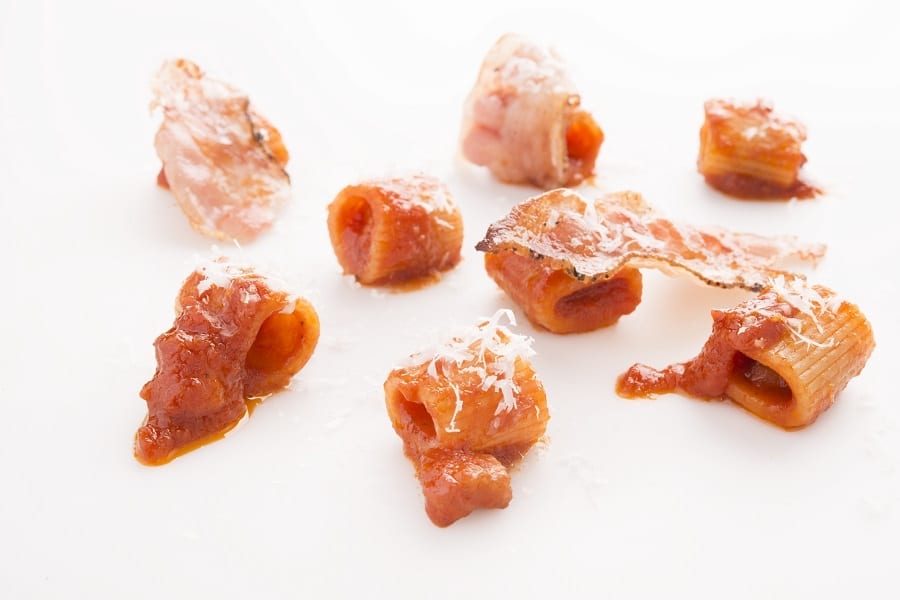 Trim the guanciale, ediscarding the tough outer skin and the pepper coating. Obtain 4 slices, 2 thicker ones and 2 thinner ones. Carve cubes from both. Mince the onion. Fry the guanciale separately, discarding the rendered fat. In a nonstick pan on high heat, add a thread of olive oil and the onion. Sweat the onion until translucent. Add the thicker guanciale cubes and wet with the balsamic vinegar, letting it evaporate. After 1 minute, add the tomato. Cook for approximately 5 minutes. Put a large pot of water on the stove and allow it to boil. Add salt and the pasta, letting it cook for about 8 minutes. Drain and toss in the saucepan. Finish cooking in the sauce, and plate.