Amatriciana and more: all about Italian guanciale 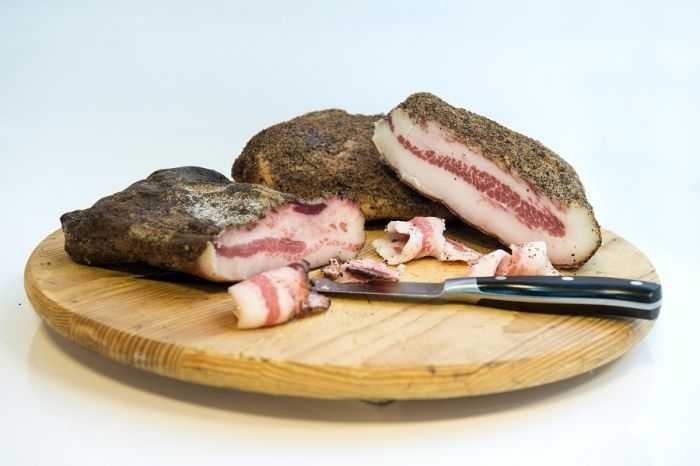 Amatriciana sauce and the importance of guanciale   Amatriciana sauce is on everyone’s mind these days. The recent earthquakes have made the town of Amatrice, set on the borders of Lazio, Umbria, Marche and Abruzzo, an internationally known name. It is also the home of the most famous dish of Roman cuisine. For months Amatrice […]

Amatriciana sauce and the importance of guanciale

Amatriciana sauce is on everyone’s mind these days. The recent earthquakes have made the town of Amatrice, set on the borders of Lazio, Umbria, Marche and Abruzzo, an internationally known name. It is also the home of the most famous dish of Roman cuisine. For months Amatrice has been at the center of media attention, and the sauce became the symbol of the murderous quake that struck central Italy in 2016. Pasta dressed with the celebrated blend of guanciale (cheek), tomato and pecorino cheese is now served in many restaurants that have joined a movement, “amatriciana solidale”. The group is flourishing in Italy and abroad to collect funds for those forced out of their homes, the so-called ‘earthquaked’, terremotati. Cia-agricoltori Italiani also created a kit for the preparation of the dish, sold in the chain of shops called “La Spesa in Campagna” (Shopping in the Country). It has been an unexpected success, but it provoked an excessive demand for guanciale compared to what was available. Some salumi-makers released for sale products that were not yet properly aged. Perhaps for this reason, in the tasting of the month dedicated to this flavorful salume made from pork cheek, with its thin line of lean meat in the center of a soft brick of tasty fat, we found products that were still young and fresh in their consistency, and with aromas that were not always evolved and complex. Most of the products we examined come from the Lazio-Marche-Umbria triangle, almost all enveloped in a veil of pepper. Overall, they presented a classic, unmistakable style with penetrating fragrances of pork, pepper and spices. Guanciale is sometimes a little ‘ignorant’, peasant-style, and for this reason is seen as ideal for the classic trio of traditional Roman pasta dishes: amatriciana, gricia and carbonara. There are also products that along with typicity offer evolved scents of noble pork, elegant in their own way.

Guanciale beyond the Italian midriff

We also wanted to draw a map of guanciale that went beyond the Italian midriff. There are smoked Friulano ones, where the notes of smoke melt into hints of meat and fragrances of wine cellars. There’s a princely one made in Colonnata as a lard, aged inside marble tubs along with aromatic herbs and spices. Its aromas resemble melted butter and pastry. There is guanciale for Roman first courses and for porky mixtures intended for larding lean meat or for adding to rolled roasts, stuffings, poultry. But there’s also guanciale for the cold cuts board and a glass of wine, sliced petal-thin and creamily laid on warm bread, inside a pita-style piadina, on a cracker or focaccia, or wrapped around a skinny bread stick, a grissino.

After the earthquake. The guanciale of solidarity The earthquake drove into the heart of Italy and into the zone of guanciale production. Many of the companies that produce the savory salume are located along the tortuous ridge that, riding the Apennines, goes from Amatrice to Visso, passing by Accumoli and Norcia, They have stubbornly continued their work. We’ll mention those that are the most famous and available on the market, as well as those that already have a review in our ratings list, like Collemaggiore and Re Norcino. Berardi has both feet in the Amatriciana’s home zone: in Amatrice itself is the family restaurant, Lo Scoiattolo. The butcher and cured meat center is in Campotosto, only twenty kilometers away, although technically in another province and another region. (Until 1927, Amatrice was in the Aquila province, before coming under the umbrella of Rieti). The approach is to use no preservatives, dry the meat next to a fireplace, smoke it using oak and beech wood, age it for 5-6 months. The guanciale has the classic triangular shape, and is at its best when taste is intense, textures juicy and soluble. The guanciale from SA.NO in Accumoli is very traditional. They are the market leader for this salume, sold through all distribution channels, a traditional Lazio-style triangular shape, rustic and laden with characteristic animal sensations. Many other salume-makers, large and small, are in the earthquake-stricken zone, not only in Amatrice, Accumoli, Visso and Norcia, but also inPreci, Cascia, Castelsantangelo sul Nera, Muccia, Agriano, San Severino Marche, Castelraimondo, Camerino, Tolentino, Montemonaco, Comunanza, Sarnano, Montefortino. If you want to treat yourself or others to salumi, choose solidarity. The town halls of the places affected can provide you with cell phone contacts for the companies.