Centenary vineyards. In search of the lost wine: Sicily and Etna 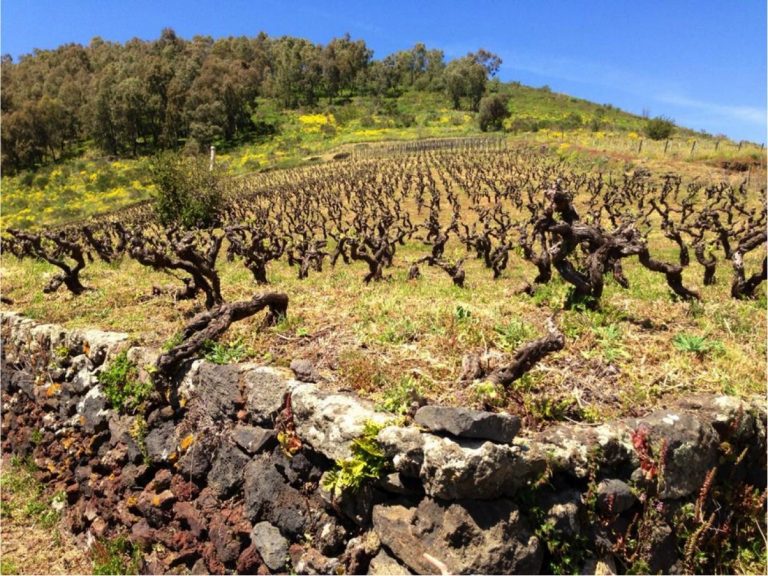 A journey through the vineyards that have more than a hundred year- old grapevines, not grafted on the characteristic pied franc training system of the 1900s to counter the onset of phylloxera which in the 19th century destroyed most of the European vineyards. Let's start from Sicily.

Vineyards that paint the gentle reliefs of the hills with sinuous geometries. Harmonious landscapes shaped by the hand of man, who designed the territory with Cartesian rigor and precise distances between the rows and the individual plants. The grapevines are identical to each other. Carefully selected clones, recalling the pages of Philip K. Dick and the immortal sequences of Ridley Scott's Blade Runner. But without going "off the shoulder of Orion... or... at Tannhäuser Gate," as the unforgettable replicant played by Rutger Hauer, it is possible to see "things you people wouldn't believe." Not "attack ships on fire... or ...C-beams glitter in the dark," but centuries-old vineyards, which survived time, two World Wars and above all made it through phylloxera, a small aphid that devastated European vineyards at the end of the 19th century.

Works of art out in the open

Nude tree trunks, gnarled and twisted, grown free to follow capricious arabesques. Wooden sculptures modeled by a wild and indomitable nature. Ancient and majestic plants, which claim their uniqueness. Works of art out in the open, capable of surprising and enchanting with archaic forms, sometimes harmonious, sometimes threatening and disturbing. The order and rigor of the modern rows is contrasted by the anarchic disorder, casual and spontaneous, of rebel daughters of the earth. Grapevines with an ancestral charm, marked by a time that has materialised in their forms. They made themselves wood, history and memory. Impassive witnesses of endless harvests, they accompany our lonely steps in the hieratic silence of their arcane and magnetic strength. One cannot be indifferent in front of centenary vineyards. Their value transcends immanence, to become the very symbol of the vine, a plant that has always been linked to myth, legend and divinity. Living icons, which represent a precious heritage that needs to be protected, to be preserved as a testimony of the very roots and origins of our culture.

In Italy there are many vineyards that have survived the phylloxera pest, still today they're able to produce grapes of excellent quality. They are grapevines that produce few clusters, with yields ranging from 15 to 30 quintals per hectare, on average. In the absence of certain documentation, it's often difficult to establish the exact age of a vineyard. The ancient custom of using the offshoot method to fill fallacies has often created vineyards with the presence of grapevines of different ages. However, the expression pre-phylloxera is conventionally used to indicate grapevines with a prevalence of grapevines over hundred years of age. Without having the presumption of the completeness of an analytical census, we have followed a path of botanical archeology in the past of our nation. Thus was born, as a tribute to the vine, the idea of ​​embarking on a journey to discover the centuries-old vineyards and their wines. Real rarities, ghosts of the past. These are bottles produced in a few thousand examples, a small niche for enthusiasts eager to savour history through the pleasure of a glass of wine. For some years now, the labels bearing the word Pre-phylloxera have been increasing. We will try to understand if it's romantic nostalgia, an infatuation for the viticulture of the past, a tongue-in-cheek marketing choice, or if this rediscovery is the signal of a sincere and conscious sensitivity towards heritage of inestimable natural, cultural and anthropological value.

Etna is a unique terroir in the world. A mountain of over 3,300 meters that sinks deep into the blue heart of the Mediterranean. A vertical rock of violent contrasts, generated by primordial nature. Fiery lava flow, soft lapilli, clouds of ashes in the blue sky. Black soils made red-hot by the blinding light of the sun, which fall asleep in the cold of the night. Cold winds collide with mild sea breeze, in a restless and vibrant atmosphere. An unstable universe in ever-changing mutation, which merges and regenerates itself in its pulsating liquid core. Hostile, stony and arid landscape, of sharp rocks and soft sands, pierced by the stubborn roots of the grapevines. In this absolute and desolate scenario, there are some of the oldest vineyards of our nation. Phylloxera arrived in Sicily towards the end of the 19th century, but was unable to completely devastate the vast Etna vineyard. In the soils of very thin sand, some parcels have managed to survive and today constitute the precious memory of the viticulture of the past.

Before exploring the old vineyards, let's talk about Etna with Salvo Foti, an oenologist and great lover of this area. «All in all, Etna's viticulture has benefited from phylloxera. The wine of the volcano, in the period immediately after the destruction of European vineyards by phylloxera, recorded a surge in wine exports, especially in France – the winemaker tells us – Here the texture of the soils played a fundamental role: the richer in sand, the more problematic the spread of phylloxera and therefore the destruction of the grapevines. Yes, because on Etna, now we can talk more of centenary grapevines than vineyards: we must consider an Etna vineyard as a town, a city, where a potentially very lethal pandemic has arrived. The particular terrain (volcanic sands), has managed to contain the mass mortality of the grapevines. The dead grapevines were instead replanted with other grafted young ones and the surviving ones were cultivated with care, managing to grow, in large part, up to the present day. So in these current vineyards, well cared for over time and transferred from one generation to another of winemakers, we find centenary ungrafted grapevines, also middle-aged grafted (but not always) ones, young grafted grapevines (almost always): that is to say, a population like we find in any city, where the different ages of individuals (grapevines), different cultural and social levels (grapevines planted by different winemakers) and beings of different territorial origins are represented, the great biodiversity present in the old vineyards of Etna. These are not only Nerello Mascalese, Nerello Cappuccio or Carricante.» So what is the importance of these grapevines? Are they just "beautiful" or do they have something deeper? «Firstly, this is a unique and unrepeatable biodiversity, a plant heritage to be preserved with commitment: the only guarantee we have for survival is biodiversity. It should not be forgotten that only about 10 years ago, especially on Etna, our agricultural policy encouraged those who uprooted old grapevines to replant them with new farming systems aimed at mechanisation, quantity and introduction of non-native grapevines (Merlot, Cabernet, Chardonnay, Pinot , etc.) then called "improvement grapevines".» What is instead the value of these ancient vineyards and the wines that derive from them? «Wine is an agricultural product: it owes its quality not only to oenological techniques, but to other aspects that are territorial, cultural, anthropological, historical, environmental (I would also like to add ethical) and, last but not least, temporal. When a good wine satisfies us with its typical qualitative and cultural characteristics, then what gives it an added value and elevates it to something excellent is only one thing: time! Its highest value depends on how long it is produced, how long the grapevines themselves produce it and how long the winegrower or wine culture itself produces it.» Why? What are the characteristics of a wine made from centenary grapevines? «Centenary grapevines are individuals who have lived in harmony in their territory for hundreds of years. There is a relationship between the winegrower and his old grapevines that can be defined as human: either because the two have aged together or because the young winegrower inherited them from his/her father and with them all the experience necessary to grow them. The attention and care required for those old grapevines and grapes produced is such that this co-evolution of the two subjects leads to a result of pleasantness, harmony and completeness in the wine, which can be defined as unique and timeless.»