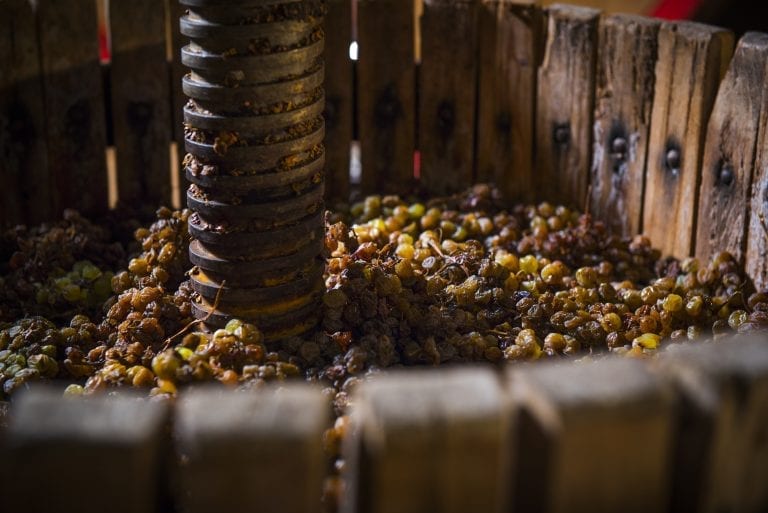 A wine that's a product of waiting, suspended between tradition and sustainability. Vino Santo '03 of Cantina Toblino, according to us the best sweet wine of the year.

More than fifty years ago, in the Valle dei Laghi in the Trentino region, a group of wine growers previously dedicated to the cultivation and sale of schiava grapes, at the time the most widespread variety in the area, joined together in a cooperative. Toblino Wine Cellar was thus born in 1960. Immediately the group of winemakers decided to go back to the nosiola grape and take back the tradition of the Vino Santo. In 1965 Toblino produced the first vintage of meditation wine made from dried nosiola bunches. And since then that tradition has never ceased...

We interviewed Carlo De Biasi, current general manager of Toblino. He has been running it for three years, after 17 years at Zonin. "I am from Trentino, I studied in San Michele all'Adige and then Agricultural Sciences in Milan. My working debut was in 1992 at La Vis winery. Then, in 1999, my Zonin adventure began. They were 17 beautiful years, where I learned a lot, a real training. Thanks to Gianni Zonin I traveled the world and visited all the wine producing areas of the planet. With Zonin I worked and launched projects related to bio-sustainability principles and this made me win, in 2013, the Green Personality of the Year award of Drinks Business". What happened then? "In 2016 I met the President of Toblino: he was looking for a person to run the company but who knew the vineyard and the work among the rows. So, thinking of putting to use what I had learned over the years, I decided to accept the new challenge".

The cooperative counts on a vineyard area of approximately 880 hectares, cultivated by 600 winemakers. Many of them carry out other jobs, some are already retired, but with a great desire to stay in the countryside and continue their wine-growing activity. Others, on the other hand, are young and have chosen to follow this path. The Valley of the lakes and the neighboring valleys offer a wide and varied territory, both for altitude and for exposure.

Many cultivated varieties, from red berries, cultivated up to about 250 meters above sea level, up to altitudes of 600 meters ideal for sparkling wines. But there are also vineyards at 800 meters, where cold resistant white grapes are cultivated. "In fact 80% of our vineyard is white grapes" continues De Biasi "because of the high mountain quota. The plots are very fragmented, there are many small parcels, characterized by tiny vines, with their low wall surrounding them, the classic pergola and rural cottage". What is the climate in this environmental context? "The climate is marked by the wind: in the morning there are cold currents coming from the mountains, then there is the "Ora del Garda" that moves north from the lake. This makes it possible to implement sustainable viticulture which, in our case, goes in the direction of organic farming".

It could not be otherwise, given the existence of the Biodistrict of the Valley of the Lakes, “It is a district that unites viticulture with sustainable tourism, made up of bike paths and country roads that can be traveled on foot. It's nice to be able to do our part and preserve wealth even through agriculture. To implement all this we have the help of a few key things: the cooperative owns an independently managed farm (40 hectares in organic regimen) and this becomes an example for many farmers. Then, next to the cellar, is Hosteria Toblino (a fine restaurant open for lunch and dinner and a wine bar/wine cellar with a non-stop service schedule) that sheds light and value on the relationship between members and the cellar: many of them come here, with the possibility of buying or tasting wines from other wineries and there are several events organized to increase everyone's knowledge".

"It's the true heritage of this valley. Made from nosiola grapes, although in past years this grape has grown less and less, preferring the ideal varieties for the Metodo Classico in Trento. Our winery has continued focusing on the native Trentino grape and, perhaps also for this reason, for some some time now, our winemakers have resumed cultivating nosiola, in the valley gently operated mostly by women".

Vino Santo has always been made by the families of the Valley... "It was an elixir, a corroborant, it represented the tonic of the population. A tradition that was lost in the period between the two wars, but was revived in 1965 by Cantina Toblino" recalls De Biasi.

"It was director Giancarlo Ciurletti who strongly believed in this". Since then the production has never stopped and about 200 bottles are set aside each year to represent the historical memory of the winery. "The sweet wine has always been produced in the same way. Very ripe grapes in the vineyard and drying in the loft until the following spring. The berries dehydrate, evolve, but lose 80% of their weight. The sweetness is concentrated, the fermentation starts, but then the wine is aged for many years, at least 15. Throughout this period it goes through the oxidative phase, but everything is helped by the acidity that keeps the wine vital, dynamic and ready to face long aging".

"In the glass it offers all the facets of passing time, both on the nose and on the palate. We can define it as the wine of patience and waiting. Waiting for winemakers, waiting in the cellar, waiting for consumers. We now bottle 5,000 to 7,000 bottles of Vino Santo. It's little more than 1% of our bottled production, but for us what matters is continuing the true tradition of the Valley".