Singapore-China. The two faces of the Asian market 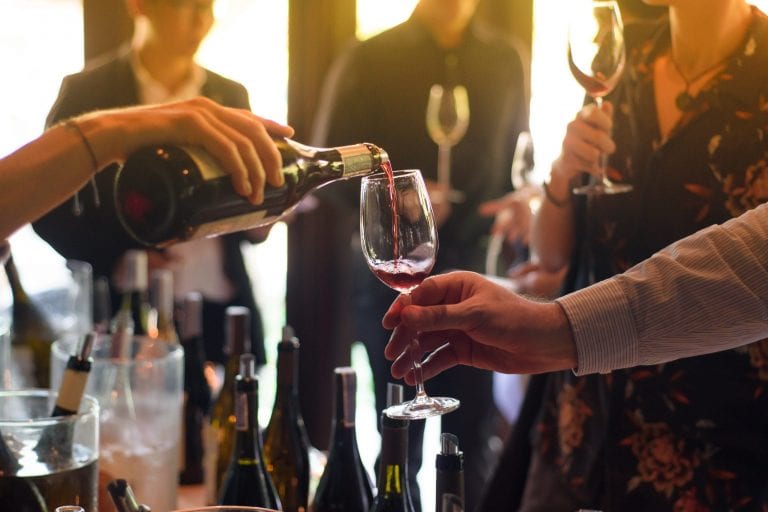 On the one hand, Singapore, the small Switzerland of the East, on the other, China, the Asian giant. Two distant economies and two different ways of understanding wine. Gambero Rosso returns to Asia, with the new Tre Bicchieri 2019 vs. 2020 format.

Singapore is a must-see in Gambero Rosso's rich calendar of international events: it's the thermometer of Italian wine in Asia. And it is also the country with one of the highest spending powers, so much so as to be called Little Switzerland of Asia.

The Top Italian Wines Roadshow has landed for the eighth time in the city, backed by a solid group of 60 historic wineries and a wealth of wines, over 200, which portray a virtually inexhaustible heritage of native varieties and territories, still little known in these parts. The event was hosted on May 6th, once again in the Chijmes complex, inside a deconsecrated church in the heart of the city. The 4 seminars conducted by yours truly were fully booked, a long journey from the Alps to the valleys of the Trapani area, with an ad hoc moment to illustrate numbers and cellars of the great international Prosecco Doc phenomenon.

Many requests for explanations and comparisons with French wines and territories. "Here there is an incredible hunger for knowledge and interest in Italy, they want to know more, the masterclasses on Italian wine are always booked solid because there is still little information on Italy" says Jessica Tan, from Singapoured, great promoter of Italian wine in the city. "The market is still very much oriented towards France," she continues, "and also for Italy, linked to the brand and the so-called ABBC (Amarone, Brunello, Barolo, Chianti). It's time to go further and the go-native trend will come strong".

The concept is strengthened by Alan Serrecchia, sales manager of Ferrari Food + Wine: “We feel a little left alone in our promotional work by the Italian Government. Neither the Embassy, nor the Chamber of Commerce support us contrary to what happens in France. A place which, when it moves, invests a great deal. We need more events and seminars”. Over 800 participants at the event, excellent impressions came from the wines of Southern Italy, in particular Puglia and Sicily: "The price of these wines is really ridiculous considering the quality in the glass", was one of the recurring comments of the importers. Consider that in these parts, the average price paid for Italian wine is among the highest in the world: 8 euros per liter.

Finally, some concerns are related to neighboring Indonesia. "In Singapore it's a good time, but we are a little worried about Indonesia, because since the EU decided to reduce the amount of palm oil, the local government has blocked, since April 1, the import of European wines and spirits. We hope we can find a solution soon," says Francesco Paganelli, export manager of the Cevico group.

The Singapore market still represents a niche in the world of Made in Italy wine exports, but one that certainly needs overseeing. The quantities of wine shipped from Italy to this country in 2018 amounted to 2 million liters, compared to 1.8 of the previous year, the increase is 11%. Considering the values, according to ISTAT data on foreign trade, Singapore's expenditure on Italian wine went from €14.1 million in 2017 to €16.4 million in 2018, equal to a sharp rise of 16.3%. The average price per liter has thus benefited, reaching 8 euros.

A positive trend for Italian wine

The positive trend for Italian wine was repeated in January 2019, with export values that, according to the first partial data released by Istat, went from 0.98 million euro to 1.1 million, against quantities which increased from 138,000 to 157,000 liters.

Another day, another stage and another format. On May 8th at the Four Seasons Hotel in Beijing, Gambero Rosso presented its new format Tre Bicchieri 2019 Vs 2020, featuring the best Italian wines reviewed by Vini d'Italia in comparison with the new vintages, which the wineries have tasted in absolute preview. The Guida dei Vini guide was the great protagonist of the event. Published by Custom Press, the publishing house of the Chinese Customs Office, the 2019 edition (the ninth edition translated into Chinese) was presented to a large audience of enthusiasts, journalists and sector operators.

"Relations between our two countries are growing, exchanges are intensifying" said Sen Liu in the presentation ceremony, representing the publisher Custom Press "the wine and the Italian lifestyle increasingly fascinate the Chinese consumer. "Vini d'Italia" is an invaluable knowledge tool, and we are pleased to be able to distribute it throughout the country to contribute to the success of Italian wine. A success that, numbers in hand, grows year after year”.

China: Italy does better than its competitors

Let's take a look at the market numbers. Wine is––in terms of value––the leading sector of Italian food exports in China, with a share of about a quarter of the total. In fact, out of more than 560million euro of food exports in China, our bottles represent around 150million euro. Moreover, in 2018 Italy was the European country with the lowest erosion of this export, since, based on Eurostat data expressed in euro, it only lost 2.4% against –20.3% in France and the –18.8% of Spain. Indeed, according to Chinese Customs surveys (China Customs) calculated in dollars, Italian wine exports show a +4.61% against a –12.64% in Spain and –3.12% in France.

A delay in promotion for Italian wines

And although there has been a slowdown in demand at the end of 2018 and at the beginning of the new year (the Chinese economy has experienced a general slowdown), the prospects are encouraging. "In recent years we have recovered important positions on the market, but above all we are inserting quality Italian wines in the prestigious segment of this rapidly evolving market" commented Enrico Berti, Secretary of the Italian Embassy in Beijing "The Chinese market is still dominated by the French, while we Italians see an important delay in promotion".

"Chile and Australia enjoy the advantages of bilateral treaties guaranteeing zero taxation, but the recent contacts between our two countries, and the strategies of the Belt and Road Initiative––the" new Silk Road "––are the prelude to a significant increase in exchanges between Italy and China", echoed Amedeo Scarpa, director of ICE in Beijing and coordinator of the ICE network in China. "We are the European country that has grown the most in turnover in the food industry over the past three years" he continued "and this was thanks to a promotion policy and market entry of younger generations, millennials and generation Z, who have a cosmoplitan education, great curiosity and the desire to explore the fascinating diversity of the world of Italian wine".

by Lorenzo Ruggeri and Marco Sabellico