Rufina: the most vertical Sangiovese in the Tuscan Chianti Universe 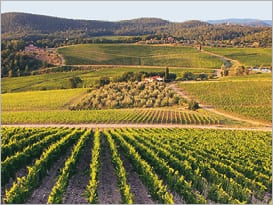 Chianti is a composite mosaic, made of areas and subzones and of different disciplinary areas for quality and specificity. The denomination Rufina is one of the parts of this land puzzle historically suited to the wine that in Sangiovese find the most capable grape to express territory.

Rufina is the smallest and most autarchic of the Chianti sub-areas, its feet on the north-eastern borders of the city of Florence, its shoulders on the Tuscan-Romagna Apennines; about 850 hectares of vineyards up to 500 meters above sea level on limestone soils, rich in galestro and alberese, for a production of around 3.5 million bottles per year. It is a suitable land, included in the famous Bando di Cosimo III Medici who in 1716 defined the boundaries and assumptions of the best wines, divided into the municipalities of Rufina, Dicomano, Londa, Pelago and Pontassieve, all united by a vibrant, fine and elegant Sangiovese grape. And by a handful of tenacious, proud producers, in love with their land and their work, guided by the light of stoic, historical figures who, even in the most difficult years, never thought of giving up; let alone call into question the denomination with its specific features.

Rufina, a special piece of Chianti

That's what differentiates it in the Mare Magnum of Chianti, on the one hand the viaticum for the global market but on the other hand condemns the approval and price war. «You live with Rufina or you die in Chianti», to quote Federico Giuntini at the head of Selvapiana, a pivotal winery for resilience and quality in Chianti Rufina, as well as long-time President of the relevant Consortium; «A strict and coercive vision of the territory, a strong thread linking vineyard and bottle–echoes Lamberto Frescobaldi from the nearby Castello di Nipozzano–Wine is made with grapes and grapes are made in the vineyard, this is the most revolutionary  banality to find in the glass the qualities of our land, those that bring it out».

The Frescobaldi family has a thousand years of history interwoven with that of Tuscany, with legacies without borders: think of the poet Dino Frescobaldi who allowed his friend Dante Alighieri, in exile, to have back the first seven songs of the Divine Comedy; or the patronage of works such as the Santa Trinita bridge and the basilica of Santo Spirito in Florence. Six more wineries joined the wine trade in the XIV century with the Castiglioni estate, in Montespertoli. Over time composing the mosaic that shows today's Tuscan viticulture, expressing loyalty to the territories and high quality in the importance of numbers, elements which earned the label the title of Cellar of the Year by Vini d'Italia 2020.

Wines in Rufina after WWII

Reaching the Castello di Nipozzano, at the time still "without water wells", for the marriage of Angelo Frescobaldi and Leonia, sister of Vittorio Albizi, who from France had imported innovations and grape varieties like cabernet sauvignon, verdot and various pinot, with the noir that is still the strength of the nearby Tenuta di Pomino. Every season is good for reaching Nipozzano, all the more so today that the splendid 17th-century villa, locted below the castle of the Mille, is surrounded by undulating vineyards manicured as gardens, and stylized cypress trees that tug at the heart.«The wine of this area has always been considered valuable – says Lamberto Frescobaldi, who carries on the excellent work of his father Vittorio and uncles Ferdinando and Leonardo – however, a strong change occurred with the economic boom of the post-WWII period, when the countryside was depopulated and the older peasants, who had landed in the city, demanded their good wine. This spawned a great impulse to bottle, and city retailers».

Lamberto keeps the wine at the centre of his thoughts, of everyday life, of his continuous research: «The wine does not allow distractions, he wants to be the protagonist». When necessary, he's severe with himself and with history, in general and the history of his family: «It's clear that we got a little lost, between the 60s and the 90s, chasing demands and losing quality, with Sangiovese becoming the most cultivated variety in Italy in the noose of prices that were to remain low». But now the bar is set: «In recent decades we were able to invest heavily in excellence, and I speak of the human factor, of skills and abilities that expressed our best selves in our group. The results prove it.» The iconic wine is Nipozzano, a classic Chianti Rufina with an excellent quality/price ratio, from which Nipozzano Vecchie Viti (Tre Bicchieri score for the Riserva 2016) is born, extremely elegant and balanced, «but also exuberant, vigorous, from a historic surviving vineyard to the replanting, that since 1990 has affected all the farm holdings». The legendary Montesodi, which ironically the Florentines had renamed "mountain of money", is instead the result of a vineyard around Casa Sodi and since 1974, in unsuspecting times, brought the pure Sangiovese di Rufina in the bottle: «Apparently more shy and introvert but in reality betraying great character and strength: in longevity it expresses itself as complex and enveloping, profound». A prototype of the most identifying Rufina which we'll talk about again soon.

The medieval roots of Selvapiana

We move away a little to visit the other historical winery par excellence, in the town of the municipality of Rufina whose name it bears, Selvapiana, born in the Middle Ages as a watchtower before being transformed into a villa. The Florentine banker Michele Giuntini bought it in 1826, his descendant Francesco Giuntini then managed the estate since 1950, hiring Franco Masseti, farmer whom he shared a fraternal relationship, and adopting his children Silvia and Federico as worthy heirs to continue his work..«Francesco is a luminary and has been an example for everyone – recalls Federico Giuntini – It's unimaginable how dramatic the agricultural crisis hit in the 1960s, the transition between sharecropping and direct management was difficult. It's not at all obvious that from bulk to bottled wine, from quantity to quality».

Francesco was among the first to believe in a "wine of Rufina" that distanced itself from Chianti, Federico carries on the battle. «After leaving high school I was induced to enroll in Agriculture university, but it only lasted a year and a half: beautiful, a sort of sabbatical year that also coincided with community service, but then my life was always been here», among organically managed vineyards that still bear the names of the sharecropping era, and cellars among the oldest and most fascinating of Rufina, alongside the new airy structure inaugurated with the 2005 vintage. «1978 marked the encounter between Francesco and winemaker Franco Bernabei, who in addition to technical knowledge posessed innate talent for Sangiovese. And a year later Luigi Veronelli's push contributed to the birth of the Bucerchiale». A "flagship wine" and among the first single variety to force the disciplinary of Chianti Rufina: from a 12-hectare parcel that best expresses the characteristics of the area.

«Limiting errors, major cleaning for decanting and careful passages, but it's in the vineyard that the bulk of the work is carried out, and where the wine acquires its identity»: this is the motto of the work in the cellar. And in this perspective should the advice of Andrea Beconcini be mentioned. «We do not believe that Rufina should emerge because we are better or more exclusive than others – says Federico – we rather think Sangiovese speaks for itself. Here, it finds an elegant expression, combined with a drinkability that's facilitated by non-aggressive tannins and good acidity; in addition to a surprising longevity, the result of suitable terrains and an ideal microclimate, with an important temperature range». From the 58 hectares of vineyards, a new cru now emerged from the Erchi estate, in the municipality of Pontassieve, which immediately set the high benchmark of the area, juicy and solemn already in the first 2016 version; «It will be part of the Vigneto Unico project, although perhaps this will not be the name, with the aim that each winery has its own Sangiovese as a testimony to Rufina's uniqueness». 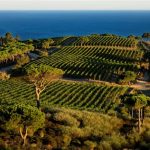