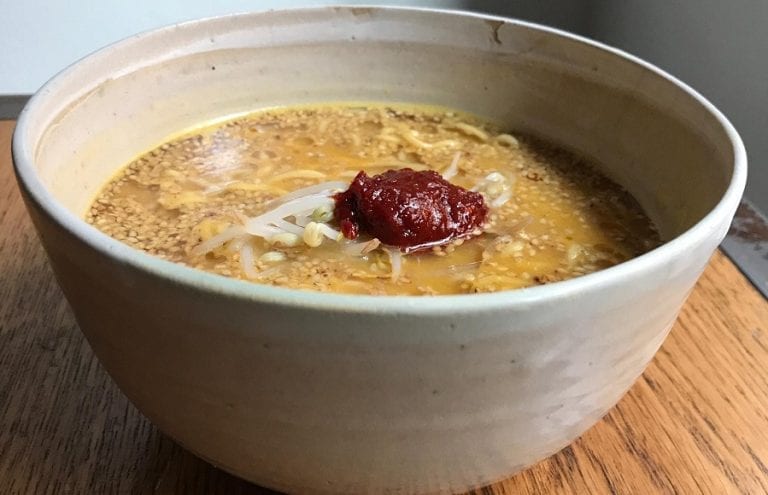 Casa Ramen Power - the temporary restaurant that opened a few days ago, hosted at a tiny space in Kenmare street, Manhattan - could only be the first test bed for a stable project in the city. Here are the latest news from Luca Catalfamo.

It's a timed adventure, until the end of May, for the first time at Casa Ramen in New York. But the challenge is certainly no less ambitious, considering how much the culture of ramen is rooted in the habits of New Yorkers, "who know very well what they should expect from a ramen bar, have well-defined tastes and preferences, with tonkotsu (made from broth of pig) on top of requests”. Luca Catalfamo is well aware of this, and besides, he too has eaten the first ramen of his life in New York: "This is why opening my place here today is a great emotion, a circle that closes".

So much so that Casa Ramen Power - the temporary restaurant that opened a few days ago, hosted at a tiny space in Kenmare street, Manhattan - could only be the first test bed for a stable project in the city. Now the focus is on collaboration with Sun Noodle, an American company specializing in the production of noodles, founded in Hawaii in the early 1980s and currently the market leader in America.

For a long time Sun Noodle has had a small workshop in the heart of New York, the Ramen Lab of Nolita, where it invites to cook ramen chefs and personalities related to Japanese food culture periodically: “With them I had already collaborated in the past, a month and a half that evidently left its mark, and then had a good public success. So we stayed in touch, and as soon as there was the possibility of doing it again we studied a new proposal, for an experience that will be more lasting, and will continue for the next three months, until May 26th ”.

But what to propose to the city where every day opens a new ramen bar? "Something that I think is missing, a menu entirely focused on vegetables, rethinking the classic proposals with the raw materials provided by local farms, and building, starting from seasonal availability, complex and new tastes." A first time also for Luca, a completely vegan ramen bar, which could prove to be the right path to pursue when investing in an independent project in the near future.

Meanwhile, in the last few days the ramen lab has taken the form of Casa Ramen Power: “The space is very small, it is consumed practically standing, on the stools at the counter, no more than a dozen people at a time, for a very fast experience , and maneuvering spaces in the kitchen equally reduced. But we brought our stickers to personalize the environment, and we will have a painted cloth that evokes the decorated wall of Casa Ramen in Milan. We try to feel at home here too”. "The important thing is to serve tasteful ramen, even if vegetarian. I am convinced the formula has great potential ".