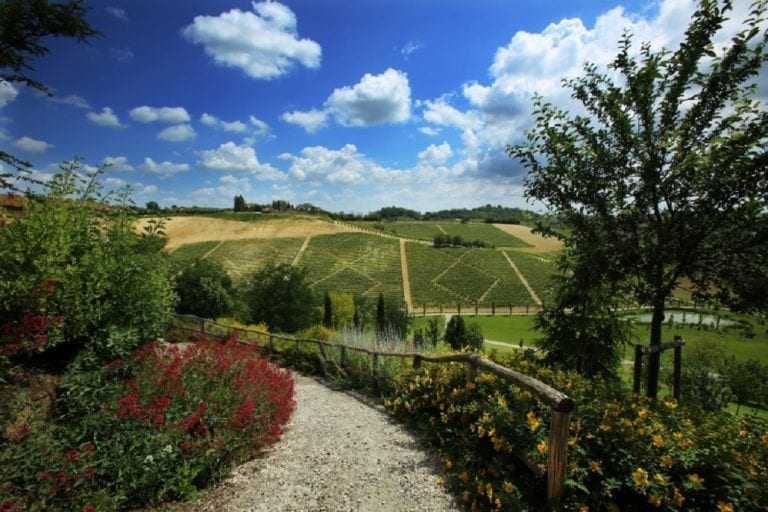 The great wines of Monferrato: Discovering Tenuta Santa Caterina. For us the Emerging Winery of 2020.

Guido Alleva spent his childhood in the Colline del Monferrato, the land where his mother was originally from, and where he discovered the value of the Piedmontese wine tradition. The passion for nature and for cultivation brought him back to the places of his childhood, crowning a dream born "from afar". The winery of the Alleva family has its headquarters in a very suggestive context, the result of an excellent restoration of the ancient buildings of the estate, with a splendid view over the property's vineyards. The production is concentrated on native vines: barbera, freisa, grignolino (mostly) and nebbiolo. A stellar lineup which garnered Santa Caterina the Emerging Winery award.

when did the adventure of Tenuta Santa Caterina begin?

At the beginning of the new millennium, after a few years spent cultivating a vineyard in the Lucchesia, I took over Tenuta Santa Caterina (20 hectares of vineyards planted with Grignolino, Freisa, Barbera, Nebbiolo and Chardonnay). Still ringing in my ears were the words of my mother who invited me to come back home: for her it meant Piedmont!

What prompted you to invest in Monferrato and not in other more famous Piedmontese wine-growing areas?

Monferrato has always been an important part of the history of wine in Piedmont since the 1200s. The wild nature of these hills, with relatively few urban settlements, is very well associated with my idea of vine cultivation oriented towards full sustainability. Mycorrhizal plants, placed in ideal conditions to explore the soil, and therefore stronger and able to absorb their mineral and limestone, with a balanced vegetative development and managed with a wise agronomic technique that respects the natural cycles: this is my idea of viticulture.

How did your passion for the world of wine come about, and for which wines in particular?

Love for the land was transmitted since childhood, the summers spent in the family countryside in Monferrato and Abruzzo, so much so that I had even suggested following a course of study dedicated to agriculture. The dream has therefore become reality in the course of life. Much has been influenced by the continuous research and the desire to know and understand wine and those who produced it, in Italy and abroad, with great capacity through meetings, visits and tastings. It was a fascinating journey and it's still is.

The wines of Tenuta Santa Caterina are characterized by being important and being wines for aging. Why this choice?

I share the Piedmontese tradition when it claims that wines require time to express themselves to the fullest. Despite their differences, each of the vines we cultivate give products that are enhanced after a passage in oak and an adequate time of permanence in the bottle. This without losing the varietal identity and the integrity of the fruit. This is the real challenge of Tenuta Santa Caterina: maintaining the vitality of the wine over time given that the evolutionary capacity of the vine is an expression of its direct vitality.

Why invest on grignolino and on freisa, two vines considered as minor in the Piedmontese wine scene?

Simple: they are noble grapes! Only wise work in the vineyard, even with plants that are 45 years old, and in the cellar ensures quality. We focus our greatest efforts, both technical and economic, on these two varieties, starting from mass selection and ending with winemaking. Only by humbly following this path can we find the best expression for these two vines.

Why the choice of aging the grignolino?

With grignolino grapes we produce two types: Arlandino (10,000 bottles) vinified in steel that expresses the immediate and fragrant side, and a version that undergoes long aging in oak, the Monferace (3,000 bottles). Two versions that interpret the double soul of this grape variety. In the Monferace we recover the tradition of maturing the best vintage batches in oak. It's a wine that stands out for elegance and balance, but above all it's a wine that, despite its austerity, is characterised by extraordinary finesse.

What are the stimuli that the emerging winery award will bring to you?

I consider this award an incentive and a great honour, but I approach it as a reward for the entire territory of Monferrato Aleramico, where great efforts are being made to modernise. We will deepen the experiences of cultivation and winemaking of our grapes further, always trying to better interpret the different vintages, the different vineyards in their individual suitability and the individual vines in their different and unique potential. A job that never ends and that amazes for the great potential of research and experimentation.