Palacio Chiado in Lisbon: a food hub in the palace 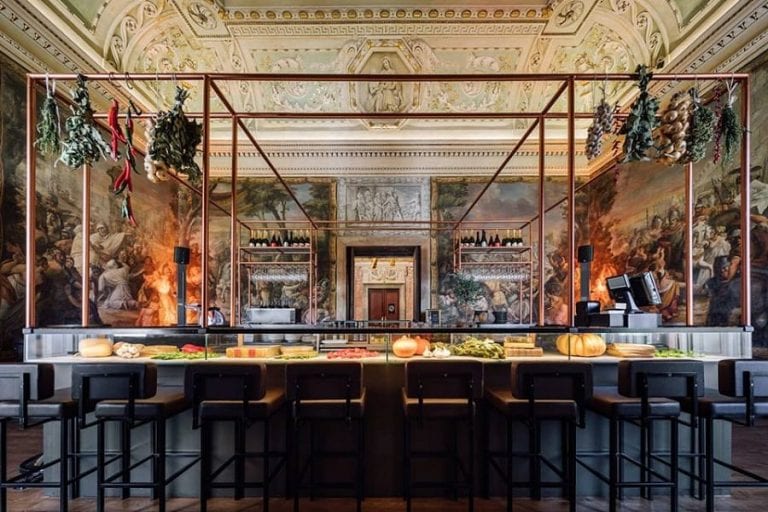 In 2016, the historic Palazzo Quintela ha reopened its doors to the public as a concept restaurant. After two years, the property has chosen to renovate the restaurant once again. Here's the result.

Palacio Chiado is the current name of the historic Palazzo Quintela built at the end of the 18th century in the center of Lisbon, one of the most elegant residential period buildings in the Portuguese capital. In 2014, a group of three entrepreneurs took over the palace with the aim of opening it to the public in respect of its past. For two years architect Frederico Valsassina worked on the construction site to restore the historic decorations and rethink the spaces according to modern needs.

In 2016 it reopened its doors to the public as a concept restaurant, right in the heart of the city. So what Portugal protects as a national historical monument has changed its face thanks to the brothers Gustavo and Antonio Duarte, who financed the restoration, aimed at returning luster to the ancient rooms, recovering, among other things, a beautiful cycle of frescoes with mythological allegories that today is appreciated on the walls and on the vaulted ceilings.

After two years of activity, the property has chosen to renovate the concept of restaurants gathered under the same roof, always respecting the spatial continuity guaranteed by the magnificence of richly decorated frescoes, stuccoes and ceilings. Chef Manuel Boia (already at Beco di Josè Avillez) supervised the work in the kitchens, personally supervising the gourmet restaurant line, but coordinating the offer of all six other restaurants that define the new gastronomic proposal of the Palazzo.

In the main hall, at the top of the monumental staircase that leads from the cocktail bar to the upper floor, a large golden winged lion hovers over the diners; but you can also eat at the "bar" - for an aperitif or a quick lunch - discovering the typical pastries (but also Italian gelato at Davvero by Filippo Licitra) in the Confetairia of the building right next to the main entrance.

Other options include having a drink at the lounge bar, experiencing the seafood cuisine of Azimuth and even the Italian-inspired dishes of Rosmarino tasting the likes of risotto with truffles and a plate of tagliolini with cuttlefish ink. Among the novelties also the healthy menu at Seed, which tries to intercept an increasingly widespread food trend in the world, with vegan proposals (seitan steak, tabulè salad with tofu) and dishes that interpret more recent trends, like poke.