Mauro Uliassi. Talent and eclecticism on the Adriatic 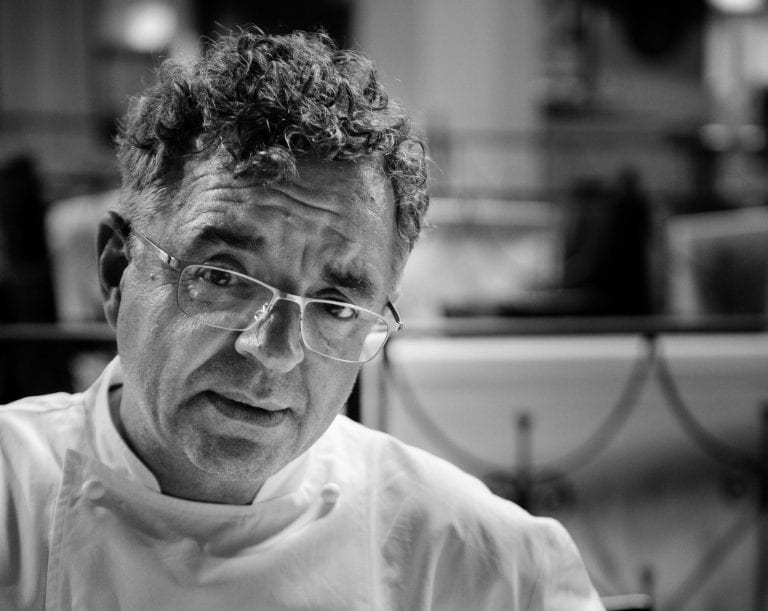 The "seafood cuisine" proclaimed by the menu gives its best when harmoniously intertwined with products of the soil. Here's Mauro Uliassi's idea of cuisine.

In 1990, after experiences in Italy and Europe and after 10 years of teaching at Hotel Management school in Senigallia, Mauro opened the Uliassi restaurant with his sister Catia. The place immediately becomes a gourmand destination where experiences of the world's top cuisine intersect, with Italy, France and Spain coming in the first place.

The "seafood cuisine" proclaimed by the menu gives its best when harmoniously intertwined with products of the soil (mainly feathered game and rare meats) that are a peculiar component of the Marche gastronomic traditions (and the gastronomic roots of the chef). Mauro immediately reveals himself as a champion in imagining the union of different flavours and traditions, as well as in the management of avant-garde stovetops and instruments.

Proof of this is the Tre Forchette recognition of Gambero Rosso and 3 Michelin Stars. Mauro was twice elected Chef of the Year in 2000 and 2009.

Salad water, snails and frogs, grass, bread and fava bean gelato
“This is a dish that evokes the typical landscape of the Marche region of days past: marshes, ditches, life in the countryside until the post-war period. This is what goes in the plate, even if now with a more evolved and conscious supply chain concept. Elements and gestures of rural life and popular cuisine are sewn together. And it becomes a game of different textures and temperatures. It's the flavour that remains in the salad bowls left to "steep" for a while at the table, it's the snails cooked from the cold so they stay upright. In the end, a chilled soup that is almost a summer drink, without fat. And to have this pure water you don't need hi-tech: pressure and maceration are "all it takes". Ancient gestures”.

“A sea that returns something that was lost, that was there but of which we had lost more knowledge. The sea hides in its depths teeming life and many treasures: we interpret them in a new way, both in taste and appearance. Forgotten foods and stories re-emerge: it's the exciting side (and the meaning) of my work, telling the life of men. The art of a cook is also in the use of ingredients that are sometimes apparently invisible, transforming them into sensory emotions. My ingredients are monkfish tripe, turbot hearts and lume, cod entrails and liver, and baby cuttlefish too. The fifth quarter of the sea. A very simple but surprising dish, strong and elegant”.

Neck and head of turbot in potacchio

“What I wouldn't do to steal the soul from the taste of the daily catch! The head of the turbot fish is generally used for broths or for seasoning. We it to perform a bigger task: we break it down and transform it, we make it become "something else", we separate it from its meaning according to tradition. The turbot neck in potacchio is cooked and presented as a rabbit shoulder and causes a slight surprise in the semantic twist between taste and representation. What you see is something other than what you taste. So the head appears real on the plate, grilled and breaded as tradition demands. And the meaning of the whole is revealed”.