In Florence, Caffè Lietta inherits the history of legendary Giacosa 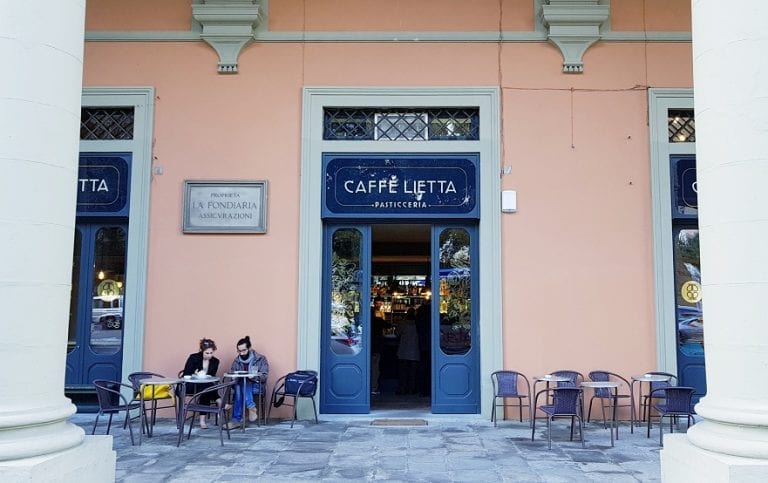 A little over a month ago, under the open gallery of piazza della Libertà, opened Caffè Lietta, which sees the historic Caffè Giacosa team at work, closed since 2017. The space is beautiful, the offer is high quality. The city's newest meeting place.

From Caffè Giacosa to Caffè Lietta

Since 1815, in Via Tornabuoni, Caffè Giacosa has gone through almost two centuries of Florentine history. Also baptizing famous inventions, such as the Negroni cocktail, of which the hundredth anniversary is celebrated this year. Then, in 2001, designer Roberto Cavalli bought the building for his headquarters: atelier and boutique, with a small opening on Via della Spada, at the back of the building, where Caffè Giacosa had continued to exist, even with small size and under the aegis of the maison. In summer 2017, however, a new change of ownership - from Cavalli to Armani - definitely marked the destiny of Florence's longest-lived café, which had closed for good. That is why Florentines will be thrilled to find part of the staff that animated Giacosa in the new space designed by Francesca and Lucilla Tacconi under the porticoes of Piazza della Libertà. The two sisters, not surprisingly, are the daughters of Lietta Cavalli, and Roberto's grandchildren: the decision to open Caffè Lietta, which is dedicated to the memory of their mother, also expresses the desire to reconnect the threads with a story that was halted too abruptly. And in a space of great beauty, which has already made Lietta one of the most pleasant meeting places in the city, just a few weeks before the inauguration.

Caffè Lietta. The space and the photos

Francesca and Lucilla have poured into the project all the care for details typical of their mother and involved professionals of proven experience, such as pastry chef Giuseppe Schiaratura, chef Nicola Chellini, barman Riccardo Banducci, with his habit of mixing Negronis. Virtually the entire structure of Caffè Giacosa, called to move in a wide space, with the production kitchen visible on the mezzanine floor, just below the frescoed vaults of Caffè Lietta, which boasts 150 square meters of surface open to the public and 45 seats spread over two rooms for those who wish to enjoy a relaxed breakfast, an informal lunch, or aperitivo. With the pleasant sensation of being in a timeless place, albeit of very recent foundation. And with devoid rituals from the worst tics of the Italian bar: there is, for example, table service. You take what you want at the counter and then you go to sit where you find space, without foolish surcharges just to name one. The merit lies with the decision to recover certain rituals and precautions of the past, for example in the packaging of sweets and takeaway caskets, with fresh flowers and small “picked” bouquets directly from the green wall that was imagined in the design phase with the collaboration of Rosa Canina, who from time to time sets up a dynamic and very suggestive stage setting, in harmony with the French-style furnishings (but made by a Florentine artisan carpentry) and antiques recovered for the occasion.

A long 12-meter counter cuts the main room, exposing a wide variety of sweet and savory preparations: even the bread for the sandwiches comes from the workshop on the mezzanine, like some pastry "inventions" that are linked to the name of Caffè Giacosa, of which Lietta has inherited many recipes. An example of this is the pirulo, a shortcrust pastry filled with ricotta and crafted in seasonal variations, added with apple, wild berries or gianduia cream. But there are also classic croissants, viennoiserie, traditional biscuits and cakes such as Sacher or torta della nonna (pastry cream and pine nuts). At lunch the bar is filled with sandwiches and finger sandwiches (3.50-5 euros), those who prefer can opt for a salad or specials of the day (pasta sold at 6-12 euros, mains at 8-12); paired with wines of the family winery (5-8 euros per glass). Also for purchase is a selection of products, such as branded jams with the floral logo designed - ca va sans dire - by Lietta (and floral decorations that also inlay the wood parquet flooring), and natural cosmetics created by Hur Laboratories inspired by the aromas of pastry art. On the lower floor, a smaller space can host tastings and private events; while the tables under the porticoes offer a pleasant view over the sunny square.