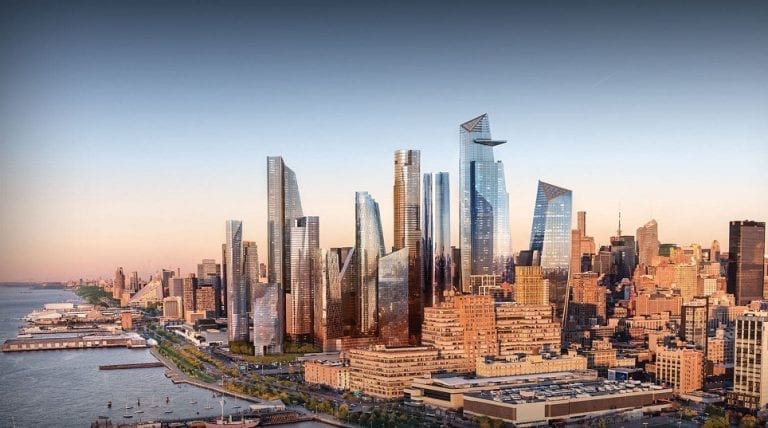 It will open on 15th March and it will include the Mercado Little Spain by Adrià brothers, Thomas Keller's restaurant, the fusion world by David Chang and much more. All the details about new Hudson Yards in New York.

The first residents will begin to populate the luxurious apartments of Hudson Yards already in the coming weeks. But only on March 15th, the public spaces of the most ambitious urban regeneration real estate project in the heart of Manhattan since the Rockefeller Center will finally reveal to the city what efforts were undertaken to redevelop a large urban area of the West Side, surrounding the fascinating Vessel by Thomas Heaterwick, the conceptual and geographical fulcrum of the endeavor.

That's when the commercial building that concentrates shops and restaurants (a hundred on each side) will also open to the public. Not a mall like many others, but rather a meeting place at the height of the company's caliber, variously divided between the most prominent actors of the New York gastronomic scene.

And not only that, since the Hudson Yards complex will mark the debut in the city of renowned chefs who are new to America, like the Adrià brothers. In the last few days the official "team" has been made known, with no shortage of details.

The curiosity is initially concentrated on the Spanish market created by the trio José Andres and brothers Adrià, Mercado Little Spain that is likely to steal the scene despite the huge deployment of other big chefs. Inside, a colorful representation of Iberian gastronomic customs, with a restaurant dedicated to fish and a spectacular set of fire roasting stations, which pay homage to the tradition of the asador and will also be a reference hub for the express preparation of paella.

The Spanish Diner, on the other hand, will be the most traditional one would expect from a tapas bar with a convivial atmosphere, were it not for the fame of its creators to increase its expectations? The experience is completed by two bars dedicated respectively to cocktails and Spanish wines, and 15 street food kiosks to explore the street foods of Spain.

David Chang at Hudson Yards will mark the umpteenth opening of the Momofuku universe, probably under the Kawi sign, and with chef Eunjo Park, already long time part of the Ko team, and then at work by Daniel and Per Se. Menu will be fusion, ubiquitous noodles and a take-out window, in Bang Bar style.

And to complete the Chang galaxy also a corner Peach Mart selling Korena-inspired sandwiches and snacks, including kimbap. In short, an aggregation of venues that Chang has been experimenting with for some time, successfully with the public and critics, at the Times Warner Center in Columbus Circle.

Moreover, there will be plenty of opportunities to stop and eat a quick bite, with proposals already established elsewhere - Shake Shack will have a shop here too, as well as Fuku, to stay in Dave Chang's world - historical places like the kosher bakery William Greenberg Desserts, in business since the 1940s in the Upper East Side, plus new international dining businesses or traditional restaurants.

To supervise the offer selection the property insisted on an exceptional guarantor like Thomas Keller, who too will have a restaurant within the complex - on two levels, on the fifth and sixth floor of the building, it will be called TAK Room, and will seat 200 and offer service at reasonable prices, for those who want to get closer to the history of French Laundry and Per Se without spending an arm and a leg - as well as Michael Lomanaco, television chef with a great following, veteran of the New York dining scene with Porter House Bar and Grill at Time Warner Center, which will double at Hudson Yards.

The most spectacular space, however, will rise at the top of 30 Hudson Yards, the building that will only be completed at a later time and will tower over all the others. Here, the reference restaurant will be called Rhubarb, owned by a London-based company that already owns numerous restaurants and cafes in the British capitol. The strong point is probably not the food, but the incredible view of the Hudson and the city from one of New York's highest vantage points.