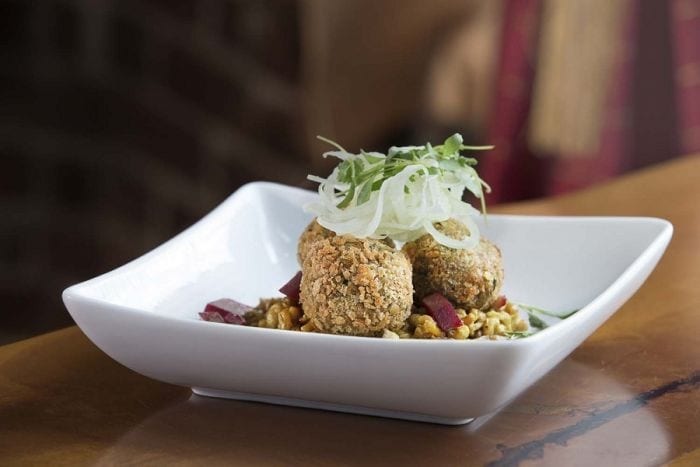 It’s a common opinion that food on airlines is something to stay away from, especially if the offer is reduced to chargeable packed snacks that comes from agreements between airlines and big commercial groups. But it doesn’t necessarily have to be like this. Here’s how American Airlines’ menus are made.

Without any doubt, inflight dining is a very bizarre experience, sat on your seat together with hundreds of other people between blankets, pillows, headphones, without considering other passenger’s bare feet and movies on monitors, inevitable traveling companions on long haul routes. But this can become something interesting if we take care, while we’re booking our flight, as to whom is taking care of menus in the kitchen. This theme is gathering new classifications and counts on passionate experimenters: the time for preserved food packed in anti-bacteria sealed boxes, waiting to be transported and fly, is gone, no matter if now it’s replaced by bagged snacks or by true gourmet lunches. The fact remains that after waiting at the check-in, passports control and resisting the stress of flying, the time for a meal is an important appointment, salient (literally), of the journey. And the way that an airline chooses to take care of its passengers during dinner time is an element that makes the difference.

What we eat is influenced by what we hear. This is what Mr. Barry Smith, Centre for the Study of the Senses – University of London, affirms through his research Airplane noise and the taste of umami. The professor affirms that “a high noise can totally impede our capacity to feel the smell and the taste, (as instead) the music softly played for dinner is capable to create a favorable environment to deeply feel tastes”. So, his thesis is that it’s due to aircrafts’ noise, and not the altitude, to modify the perception of our taste buds. A strong noise can indeed cancel the perception of fundamental tastes such as sweet and savory, but it apparently heats less on umami’s perception. Few airlines decided to solve this problem distributing noise cancelling headphones during meals. Usually spices and long cooked meals such as braised better keep their taste compared to other dishes like salads that seem to be almost imperceptible.

It’s still inevitable to be surprised to see healthy, appetizing in appearance as well as tasty, food when you’re onboard. Maybe served in modern designed porcelain dishes with real cutlery, real glasses and crystal stem glasses. There’s an important challenge going to this issue, and many carriers are becoming aware of this. Both as far as a quick food service (maybe chargeable onboard) is concerned, and as far as high altitude fine dining is concerned. For instance, American Airlines (the first carrier we analyze in this investigative report) has long understood the importance of this, you can find onboard dished such as duck confit Pot Pie, slow-braised lamb Osso Buco and Kamut grain risotto. Moreover, with AA the menu changes depending by when and where you travel. 4 chefs dedicated to 4 different areas: Maneet Chauhan and Mark Sargeant for Europe – United States and South America, Sam Choy for the Hawaii and Julian Barsotti for domestic flights. Then, there’s a wide range of wines which accompany the menus. The list comes from a careful selection of award-winning wines that gave to the airline the 2016 Global Wine Traveler Award during the survey dedicated to onboard food powered by Wings.

Maneet Chauhan is responsible for American Airlines’ menus on the routes Europe – United States. An expert in fusion cuisine mixing Indian and American traditions taking a look to the Italian one, her gastronomical research wants to give a global touch to the traditional American cuisine. Maneet was born and raised in India’s Punjab Province, before moving to New York to attend the Culinary Institute of America. Maneet became the Executive Chef of Vermillion in Chicago and New York at a remarkably young age, in her career she obtained many awards – the James Beard Award for instance – she created her own successful spice range (from this point of view she reminds a bit the Italian Francesco Apreda of the Imàgo in Rome) and she wrote some cookery books. Her first one is in fact titled Flavors of my World. Maneet has a long career behind her spent working in the best hotels and restaurants in India and in the United States, and she’s best known for her role as a resident judge on the Emmy-nominated television show ‘Chopped’, aired on America’s Food Network. Maneet is currently Executive Chef of ‘Chauhan Ale & Masala House’, in Nashville, Tennessee.

Is this your first partnership with an airline?

This is my second partnership with American Airlines. In 2011 I had worked with them to develop menus for the Chicago- Delhi Sector.

Was it a nice experience?

It was an amazing eye opening experience and I loved it.

The onboard food offering is changing as airlines strive to offer gourmet-inspired dining. How do you create a menu for the most discerning passengers?

Because of the ease of traveling, today's travelers have a very sophisticated palate. They want something which is global, flavorful and something that has been cooked well. I created a menu taking all of these things into consideration. Flavor, quality and presentation are the key.

Which is the orientation?

The leaning is toward something that is global, something that is flavorful and especially well done. I create a menu keeping in mind all these aspects together and taste, quality and presentation are the key. We take lot of care about passengers’ opinion and we appreciate feedback abut dishes we offer them. We’ve also changed some things considering ideas that passengers have shared with us.

What is the hardest challenge in creating a menu designed to be served at 30,000 feet?

The toughest part is to take into consideration that the food will be consumed at approximately 30,000 feet above ground and due to this the taste buds are dulled.

How do you realize this?

What factors do you consider when choosing ingredients for an onboard menu?

I take into consideration ingredients which are of the best quality (if the foundation is strong the dishes will be strong) and where possible seasonal and local ingredients. The offerings need to be global and ingredients that stand up to storage and re-heating.

Tell us how you went about designing the menu and the production processes involved?

Step one was conceptualizing the menu and coming up with combinations that work together. Then we started making these dishes and plating these on the airline’s plates. We made the food a day in advance, cooled it and reheated it to make sure that the dishes worked.

Are there intermediate steps?

An entire AA team tasted it, we worked out the feedback and then confirmed the recipes.

What is the process of a dish from the approval to the service onboard?

The kitchen then converted these recipes into their system and then made all the dishes which were presented for final approval.

How often will the menu be updated?

There will be 4 menus that will be rotated through the year.

Examples of dishes featured in the menu?

What about main courses?

Do you also offer desserts?