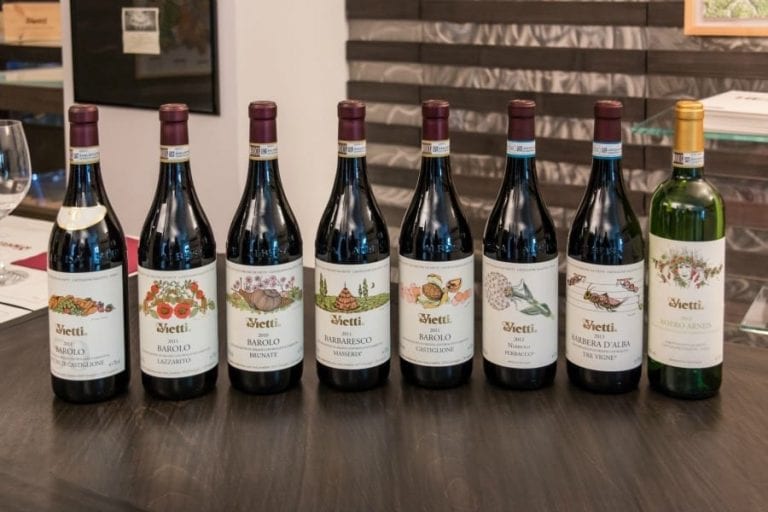 With the release of the 2011, the Vietti family’s Barolo Rocche di Castiglione celebrates its 50th year. An important achievement, it underlines the quality achieved by the Langa wine world since that first premium cru. Ten vintages and half a century of history.

With the 2011 release, the Vietti family’s Barolo Rocche di Castiglione celebrated its fiftieth year. It is an important occasion, especially if we consider the stunning changes that have taken place over this half century not only in the Langhe in terms of climate, style, business, and landscape, but also the parallel revolution in the world of Italian wine in general. Above all, we must consider where we started from. Fifty years ago, the Langhe existed in a sort of productive Middle Ages. But a few big bottlers and a few quality producers made the difference, and today we can rightfully call them the "Pioneer Barolo Boys".

They were capable, determined, passionate, and bonded by an extraordinary understanding of their own territory and a precise vision of what needed to be done. Alfredo Currado, who was the first to vinify and separately bottle the grapes of this cru, had vision. “His decision was obstructed at every turn. I can’t even believe it when I think about it now,” Luciana Vietti says. “When my husband proposed the idea, they thought he was crazy. Or worse. They tried to make him change his mind, saying Barolo was a blended wine, an assemblage, we would call it today. I think it was just that conviction, that obstinate certainty that convinced my husband to follow his own path.” So 1961 was an important vintage year in the Vietti-Currado household. It was the first harvest Alfredo personally managed. “My father, and before him my father’s father, and so on since 1873, when it all began, always personally ran their own estate. My husband, who was an enologist and had already worked in some wineries in Canelli, began consulting here in 1958, two years after we were married. Actually, it was really because we were married, since even though the estate needed an enologist, my father didn’t want to spend any money. But when my father died, my husband could make the decisions he believed to be right. Like bottling the cru, or using the labels by Gianni Gallo, which were very controversial at first. Later, everyone adored them.”

Rocche di Castiglione is a long and narrow vineyard of about eight hectares that follows the Alba Dogliani provincial road. It faces southeast, has thin, loose soil layered with strata of tufo that can vary a great deal within the same plot of land. The Vietti family has about a hectare, 4,000 vines from which they can make 3,600 to 4,000 bottles annually. Vinification is traditional, above all as regards maceration. “We do what are considered long macerations,” says Luca Currado. He, his wife Elena and his brother-in-law Mario Cordero are presently in charge of the winery. “After the 1960s, we went to macerations of about four weeks, which can extend as long as forty days, depending on the year. Our system is called submerged cap, that is with the cap (the solid part of the grapes that is naturally pushed up by the carbon dioxide developing during fermentation) immersed in the liquid.” Malolactic fermentation takes place in barriques that are used for about four weeks over seven to eight years. Then the wine is transferred to 33-hectoliter Slavonian oak barrels where it stays  for over two and a half years. “Villero is our most important wine, but we are deeply committed to Rocche di Castiglione, not only because the cru gives extraordinary wines, but because it represents our first step towards the logic of cru that made the Langhe what we all see today, a territory that is complex and richly multi-faceted.”

The tasting was a marvelous occasion that reached back in time until it touched the first vintage year produced of this cru – 1961. Unfortunately that bottle, like those of 1966 and of 1971, was corked. Nevertheless, we thank the Vietti family for opening these unique bottles for us.

2011 | 90
A floral and fruity nose, open and expressive, with notes of strawberries and medicinal herbs. Mouth-filling although still fresh and fine, it has a creamy and compact palate, sweetened by the presence of fruit but with good acidic thrust that bestows a long and juicy finish, rounded by the presence of alcohol.
2010 | 94
The nose is fascinating and well defined, with notes of red fruit –wonderful cherry stands out – enriched by delicate aromas of violets and roses along with a hint of tar. A marvelous palate follows: ethereal but solid, delicate yet flavorful. Tannin thrusts and struts, youth is evident, but in the future, this wine will reach great heights.

2004 | 92
A wine that opens without reticence, revealing all the complexity that a Barolo from Rocche can offer. The nose is initially fruity, immediately intense and fragrant. Notes of iodine and resin begin to emerge, until they suggest balsamic and hazelnut sensations. Tannin states its case, without becoming excessive. Vibrant and still rigid, it proudly accompanies the verticality of acidity and the softness of alcohol.
1999 | 93
A decidedly complex nose, with sensations that appear and disappear as the minutes pass. First, cherry, still meaty and crisp, with intermittent balsamic and mineral sensations. Then comes a darker moment, with hints of humus, damp soil, smoke. And finally, dried flowers, ethereal, revolving. Extraordinary acidity helps the wine
free itself from the grip of tannin that still wants to dominate – but doesn’t manage to. The acidic push carries it on high and makes it dance.
1996 | 91
Monolithic and static at the start, impeded by evident reduction odors, little by little, animal and country life sensations emerge – leaves, autumn woodlands, mushrooms, stone – that are almost wild and rebellious. The mouth, too, resists taming, with well-extracted tannin that is still decidedly rigid and severe. Very pleasing, almost smoky nuance on the finish along with the acidity that is typical of the vintage year.
1989 | 94
A nose that doesn’t easily display all its potential, but when it does, it is astonishing. A parade of sensations follow one another helter-skelter. Jammy fruit is followed by a hint of sachet, of dried flowers, tar, candied fruit and spices. Then it’s time for licorice and truffles. The mouth is harmonious and flavorful. Tannin shows up, but does so
gracefully with polymerization already done, aided by the usual wonderful acidity. A deep and very long finish, with unforgettable flavor.
1988 | 89
A decidedly dark and resistant nose, with balsamic and smoky sensations, tertiary notes of herbal infusions. The palate is more convincing, still sweet and welcoming, well-defined, but slightly slowed down on the close by a stubborn tannin that doesn’t want to give in.
1979 | 93
A marvelous nose, intriguing and kaleidoscopic, a truly wonderful surprise. Notes of citrus fruit, candied mandarin oranges, yellow peach accompany more ethereal and delicate sensations of dried flowers, rosewater, spicy notes. The palate is vertical, sweet and taut, still tannic but not excessively so, with a long, satisfying finish, vibrant and decidedly dynamic.
1978 | 90
Color is still amazingly concentrated. Very intense and balsamic nose with ripe red fruit aromas accompanying notes of blood oranges. The palate, still rigid, is surprising, and embodies the stubborn,unyielding character of this vintage year, which seems to never want to unbend, no matter what the cost.
1967 | 95
Marvelous wine, very clear color and delicate bouquet. Floral notes define it, with hints of dried violets and rosewater, accompanied by earthier tones of ginseng and roots, hints of pencil lead and smoke. A wonderful palate, complex and vertical, well-structured and rhythmic. A great wine that holds up very well in the glass.
Participating in the tasting: Antonio Boco, Paolo De Cristofaro and Gianni Fabrizio