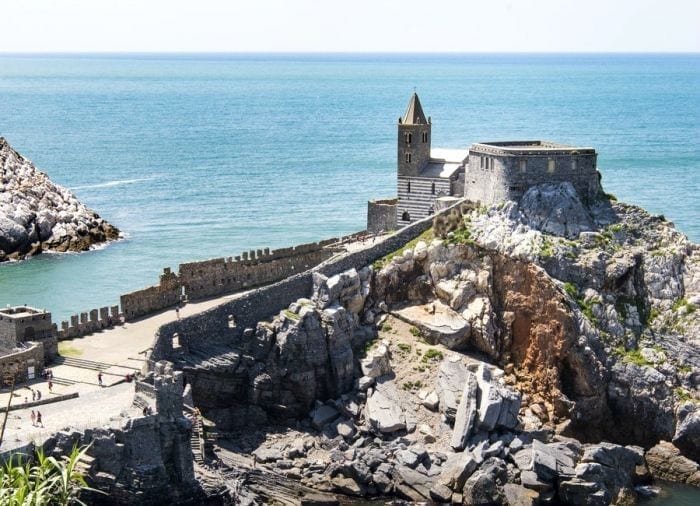 We went to Liguria, in the famous Golfo dei Poeti, where everything is green. Oysters included. Here is what we liked the most.

A single adjective would be enough to describe this itinerary as best as possible: green. The green of the promontory, which, like in a watercolor painting, is reflected in the waters below. And the green of the table, which ranges from the strong hues of the most famous pesto sauce of Italy and the soft tones of the green oysters. We're in green Liguria, in the picturesque Portovenere, the "sixth terra" that anticipates the other five, of which it is harbor and encore.

The view overlooking the gulf from the Castello Doria doesn't fear comparisons with any last-generation drone: just climb up to to the top to spot the Cinque Terre, the island of Palmaria with its hiking trails, the cave of Byron and the whole Gulf of Poets, windmills turned into watchtowers, the Church of San Pietro that looks like a fortified castle built on the sea, the rocks where, according to the legend Venus stopped, fascinated by the lush vegetation and finally, the palace-fortresses that, with their pastel colors, have become the picture-perfect symbol of this territory. The heart of the town, with its shops, exclusive boutiques and clubs, pulsates in the narrow streets snaking amid these buildings.

Among these, La Piazzetta deserves a stop: an intimate and familiar local that offers refuge to customers from breakfast to after dinner. The culinary proposal ranges from fragrant croissants in the morning to typical Ligurian focaccias, by way of testaroli pasta with pesto. Meals end with high quality spirits. Opposite, there is the reign of olive oil lovers, Bansigo oil bar, which offers bottles and tastings of extra-virgin olive oil from the area's Razzola variety.

All around, beyond the wall of the fortress-houses, almost watching over all this treasure, there are the fishermen who like to call themselves the "conscience of the Gulf", attentive that progress doesn't come in the way of what was created in this sort of "vineyard of the sea," populated especially of 'muscoli' (aka mussels) and oysters, which bear a trademark: the green color of the typical seaweed of the area. To get a closer look at the marine life, the Cooperativa dei Miticoltori Spezzini (90 members) organizes exclusive boat tours for the Grand Hotel of Portovenere, with the same fishermen, who conclude the experience with oyster tastings and wine. Leading the tours is a very special guide: the seagull Arturo, a lookout of the sea that every keeps the fishermen company, just like the old parrots resting on the shoulders of olden day pirates.

"These oysters are a bit like the wines- explains fisherman Paolo Varrella- their characteristics depend a lot on what we can define marroir (the equivalent of terroir for wines, ed.). These oysters, for example, naturally present their characteristic green color, while, the French – allow me the patriotism – for this same effect place the oysters in special tanks in contact with seaweed".The oysters here are a historical sea culture (dating back to 1887), while the oyster farms belong to a more recent history: "We started again in 2006 - continues Varrella - and now we have also reintroduced the flat type, typical of our gulf. The life cycle of the oyster begins in October/November and lasts about a year. But we must be very careful about what we refer to as 'sea boar': the ‘super aggressive’ sea bream". These in fact, are the most feared inhabitants of the seabed around here. At least in the eyes of those who farm the oysters. This is how the very particular "scarebream" was born, that is the shape of a shark at the entrance to the farm pools.

The step from the sea to the pan is quite short. Expressing all this "marroir" on the plate is a very stimulating challenge, as explained by Francesco Parravicini, executive chef of the Palmaria Restaurant, within the Grand Hotel. A challenge for the territory and its director Antonio Polesel: after housing a Franciscan convent since the '600 and transformed into a hotel in 1970, the structure reopened a few years ago and recently was bestowed 5 stars (the only one in the Cinque Terre and the Gulf of Poets). Hiring Parravicini the restaurant has carved out a central point in the life of the fishing village, erasing the idea that in luxury hotels of such tourist destinations only foreign guests dine at the hotel restaurant. "The relationship with the fishermen is constant - says the chef - day and night, I would say. Just think that one of the suppliers, Matteo, also calls me at 3 AM to tell me what he caught. So, then I'm there in my bed thinking about fish and how to cook it the next day".The result is a locality-inspired cuisine that's always modern, that however, does not give in to banal classicism, and which is inspired by the legendary Grand Tour era. To realize it Lombard-native Francesco––boasting a curriculum that includes the Rimini Grand Hotel and the Milan Four Seasons, passing through Harry's Bar in London––has learned from the local women's cooking, grasping recipes and secrets. A few examples include destructured mussels alla spezzina; trofie pasta al pesto; millefoglie del Levante (a vegetarian club sandwich made with prescinseua cheese). "What I find very stimulating is being located in a borderland: one step away from Tuscany and not far from Piedmont and Emilia-Romagna; places where, in turn, I bring my own heritage. So even in the dishes customers can notice this mélange of flavours".In addition to fish, also many legumes and elements of the earth are employed: chickpea mesciùa, cannellini beans, farro with extra-virgin olive oil, garganelli pasta with chianina sauce, octopus with crispy bacon, pasta with chickpeas and calamari.

The hotel's cocktail bar also speaks Ligurian (the border dialect), where native Giovanni Pellegrino is at the helm and where, together with classic cocktails guests can taste signature ones based on liquors of the region, produced by the distillery of nearby Colli Lvnae winery.

Located only 30 km away, not far from the Gulf coast - the winery is certainly worth visiting (see also the article by Emiliano Gucci), to understand what quality enotourism today is all about. With a history and solid roots in the territory and the intuition of its charismatic founder, today the estate is not just a winery, but a forge of family-oriented ideas, with in-house jams and liquor laboratories. Entering the latter is like going through the door of an alchemist's laboratory, redolent of citron, oranges, lemons, wild roses, peach leaves, from which, depending on the season, the most famous liqueurs of the area or those forgotten, such as rosolio, persichetto and limoncino are produced. "This is the realm of Signora Fiorella Stoppa- says Debora - the owner of a historic liquoreria in La Spezia. When years ago it became difficult for her to carry on the production on her own, we offered to come here to continue the activity together. We have been together since then but forget about revealing her magical recipes". All products here can be tasted and purchased. Together with a selection of Hippocratic wines (so-called healing wines), which Debora herself produces, starting from wines "stolen from Papa's cellar",she smiles: they are the spicy red Ypocras, the fermented mead made with apples and a white made with Sambiké elderberry flowers.

Ideally riding to the end of this horseshoe piece of Liguria, pushing to Lerici, the third Municipality - after Portovenere and La Spezia - overlooking the Gulf of Poets. After a visit to the two castles (the one in Lerici and in San Terenzo), almost like a lighthouse, 60 years young Locanda Miranda welcomes us. The view from here is priceless, the comfortable environment, the delicious and reassuring cuisine. All based on fish. And this part of the coast is the destination of over 300 swimmers who, every year in August, dive in Portovenere to challenge the waters swimming to San Terenzo during the Byron Cup: an international competition celebrating the historic undertaking of Lord Byron who, according to legend, swam across the gulf to reach his friend poet PB Shelley. A legend, of course. But everything here is to some degree legendary. And if, looking closely, perhaps, Byron's silhouette is still visible, between the Arpaia grotto and the Montemarcello promontory. "I had a dream, which was not entirely a dream".