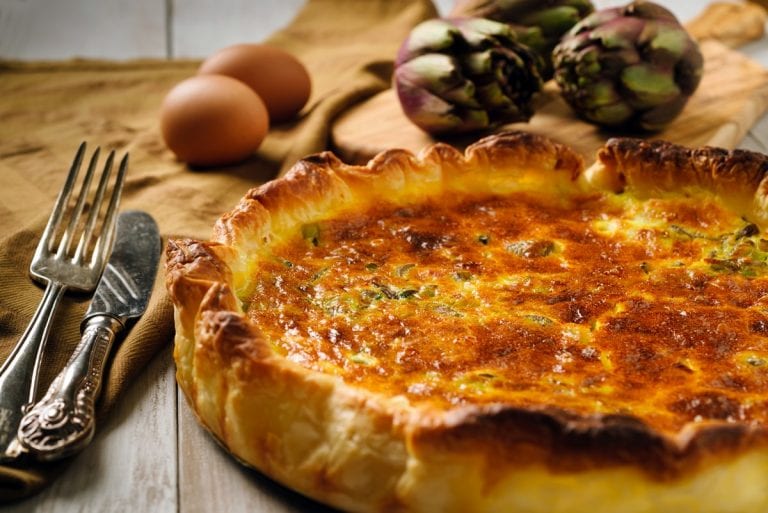 From French quiche appreciated by royalty, to the Umbrian torta al testo once baked on terracotta plates, here are the most delicious savoury pies you can make.

Savoury pies, from quiche to casatiello

Quiche, puff pastry bundles, rustic pies, casatiello: any ingredient inside a crusty shell of pastry acquires new life, becoming the perfect office lunch or appetizer for a last-minute aperitif. Savory pies, furthermore, are real dinner savers: of course, it would be preferable to prepare the crust at home, but on the market there are many brands (including good ones) of ready-made puff pastry, to be unrolled and stuffed as desired for a delicious meal that's also nutritious and practical. Also consider brisée, in addition to the whole repertoire of bread like pies, like savoury pound cake to donuts, without forgetting the classics of the Italian tradition, such as casatiello or tiella. Listing them all would be impossible, but mentioning a few is a must: here are some ideas for excellent homemade savoury pies.

The popularity of ready-made puff pastry is such that it is often mistakenly thought that it's a modern invention. In fact, the recipe has ancient origins: Egyptians, Greeks and Romans already made an archaic version with olive oil. The current version is linked to two chefs who have made the history of European haute cuisine: first of all François Pierre de La Varenne, who worked for Maria de' Medici at the court of France and developed the recipe in the 18th century, using butter instead of olive oil and decreeing the rule of the fateful 6 rounds. And then Marie-Antoine Carême, chef of noble families and sovereigns from half way around of Europe, who codified it at the beginning of the 19th century, defining the definitive 5-round method.

Whether ready to use or homemade, puff pastry is a true wild card in the kitchen: it can be filled with sweet ingredients to create a quick and tasty dessert, but it is with savoury products that it gives its best, becoming a crumbly and light scrust, which can house any preparation, also perfect for taking advantage of less crunchy vegetables and products that are about to expire. One of the most classic fillings is one made with a mixture of ricotta and cooked spinach, and in general all the appropriate vegetables, from winter greens to summer produce, but you can also create simple bundles with ham and cheese, radicchio and gorgonzola or whatever is preferred and is available. For a very quick gourmet appetizer, just season some fresh ricotta with a few powdered aromatic herbs, salt and pepper and voilà, here is a fragrant savoury pie filling to accompany a glass of wine.

Another buttery crust of the French tradition, but with a less long and complex preparation, is shortcrust pastry, a fundamental part in preparing legendary quiches, savoury pies that include a creamy filling made with eggs, cream and other ingredients. To make a good brisée crust it's important that the dough is kneaded as little as possible, avoiding heating it with the hands, which would make it hard and difficult to roll out, and resulting in an overall loss of crumble (a good method can be to cool hands in iced water before kneading).

But back to quiche: the most famous is quiche Lorraine, born in the namesake region of France in the late 16th century. The area was  borderland in the past, disputed several times between France and Germany, and which for this reason shows distinctive German traits in its cuisine. Even the name quiche itself comes from the German kuchen, which means “cake,” but more generally it indicates a shell of dough that contains other ingredients. It seems that the recipe appeared for the first time at the court of Charles III of Lorraine, as a bread shell stuffed with cream, egg and butter. It was later modified in the 18th century by Vincent de la Chapelle, house cook of the King of Poland (and Duke of Lorraine) Stanislaus. Today, quiche Lorraine generally includes a filling made with cream, whole eggs and egg yolks, seasoned with salt, pepper and nutmeg, to which cheese and bacon are added, but it's also commonly found in vegetarian version with zucchini or other vegetables.

These are two great classics of the Easter festivities in Naples, but no one will bat an eye for making a fine casatiello or tortano during the rest of the year. Born in the 17th century and mentioned, together with pastiera cake, in the folk fable "La gatta cenerentola" by Giambattista Basile, casatiello is made with leavened dough topped with cheese and cured meats and baked in the oven complete with whole eggs in their shell placed on the surface. Tortano, which is very similar, differs in the arrangement of the eggs, which are present (hard-boiled and in pieces) within the dough, rather than on top of the ring-shaped bread.

In dialect it's known as scarpasòun, from scarpa ("shoe"), a local term used to indicate the lighter part of Swiss chard, which is the main player in the filling, but in the rest of Italy it's simply called erbazzone and is one of the symbolic recipes of Reggio Emilia. The basic crust is called foieda, made with flour, lard and salt: boiled chard is the filling, along with onions wilted in a pan with garlic and pieces of lard. And then the ubiquitous Parmigiano Reggiano, and a little chopped parsley, salt and pepper. Many typical products derive from Erbazzone, such as erbazzoncini and salted chizze, popular throughout the province: the former are small cakes fried in lard, while the latter are small squares of puff pastry cooked in the oven and stuffed with the same ingredients. A variant typical of Castelnovo ne' Monti is the mountain erbazzone, which includes in the dough rice cooked in milk and places the vegetable mixture on the open face surface rather than inside.

In Lazio there is no trip to the sea near Terracina, Sperlonga or Sabaudia without a stop to taste tiella made in Gaeta. A rather thin shell of dough is stuffed in different ways: octopus and olives; or with escarole, spinach, or with cod, anchovies, sardines. Originally it was born as a humble meal for farmers and fishermen who needed a nutritious and substantial meal during their hard working days, and which could keep for several days. Tiella also made it possible to consume the catch of the day and use flour, combining different ingredients from land and sea.

The appearance is somewhat reminiscent of a thicker piadina, but the Umbrian torta al testo is in actual fact a stuffed savoury pie, one of the most famous specialties of the regional gastronomic tradition. It is in fact found in every province of Umbria, albeit with different names (torta in Perugia, crescia in the Gubbio-Gualdo Tadino area, ciaccia in Città di Castello and in the Valtiberina). This preparation is present in several variations. There is pizza under the fire in Terni, for example, cooked under ashes; or crescia in Gubbio, which includes pecorino in the dough. In any way it is served, it's a delicacy of ancient origins, once a bread alternative without yeast, made with wheat flour if destined for the less affluent, with corn flour for the richest. The name derives from the Latin testum, a brick tile on which the ancient Romans cooked their dishes. Back then, in fact, Umbrian torta was cooked on the embers in a terracotta plate called testo, today replaced by others made of cast iron and aluminum. The most popular filling is sausage and chicory, but as always the possibilities are endless.

Mix the flour with the yeast, then add half the water. After a few minutes, incorporate the salt and the remaining water. When the shaggy dough begins to come together, add the olive oil, continuing to knead until a homogeneous dough forms. Cover it with a damp cloth and let it rise for 4-5 hours, depending on ambient temperature. Once this phase is over, the dough should be doubled in volume.

At this point, roll it out with a rolling pin. Mark along the diameter of the torta with the tines of a fork and place it on the already heated testo baking stone, trimming away any overhang. Cook over the flame for 10-15 minutes, flipping a couple of times on each side. Once cooked, allow it to cool slightly and fill it with seared and crumbled Norcia sausage, mozzarella di bufala and petals of black scorzone truffle. Cut into wedges and serve.