Dining in in Slovenia close from the border. The best restaurants to try 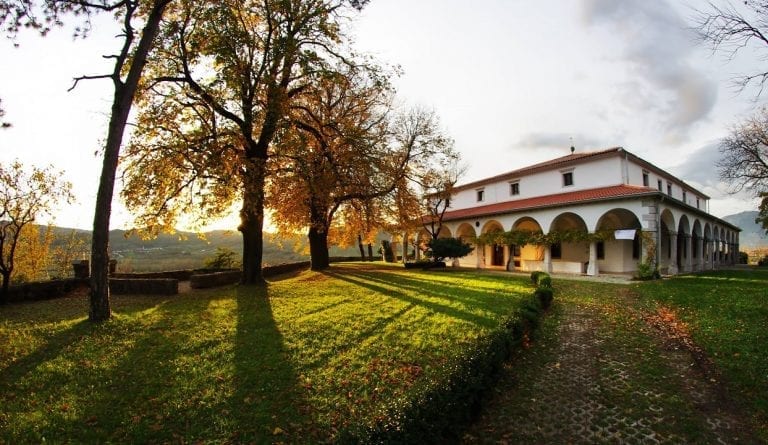 Entering from the Friuli Venezia Giulia border, Slovenia proves to be an excellent destination for day trips or easy vacations. Recently awarded by Michelin, the Slovenian dining scene offers many surprises, both traditional and modern. Here are our suggestions.

The Michelin Guide in Slovenia

Even the Michelin guide, for the first time in history, dedicated a publication to Slovenian dining, which has so far been excluded from the European tour of the Red Book inspectors, certainly not because it didn't deserve attention. Not surprisingly, the debut edition bestows important stars to places that have recently driven Slovenian gastronomy on the international scene. On the highest step of the podium is Ana Ros: just across the Italian border, in the city of Kobarid, historically linked to war memories, Hisa Franko is the only restaurant to immediately win two macarons. The judgment honours a chef with a great personality, who has become an ambassador of Slovenian cuisine around the world. But, despite the limited territorial extension of a country which by the way is largely covered with forests and large farmland expanses, there are several restaurants that obtained the glory of a first star in the coveted guide. Starting with another good cross-border chef such as Tomaz Kavcic, who brings a star to Pri Lojzetu, in the beautiful Zemono estate in the Vipava valley, just 50 kilometres from Trieste (the other new stars are Hisa Denk, Vila Podvin, Dam and Atelje, the only macaron in the capital city Ljubljana).

Dining in Slovenia. Our suggestions

The guide dedicated to Slovenia, which includes a total of 52 entries, also focuses on the places worthy of offering the best value for money, awarding 9 restaurants as Bib Gourmand. "Slovenia has an excellent script fitting among the best gastronomic destinations in the world," says Gwendal Poullennec announcing the latest addition to the Michelin guides. And we take the opportunity to put together the addresses that are worth the trip not too far beyond the Italian border (with an incursion into Ljubljana, reachable in just over an hour by car from Trieste and Gorizia), because this summer Slovenia could prove to be a truly ideal destination for easy holidays (first, however, if possible do privilege Italy, which really has a lot to offer).

Surrounded by a lush garden, at the gates of Kobarid, the brick red house of Ana Ros and husband Valter Kramar is both a relaxed and lively environment, which welcomes throngs of young people from all over the world to work in the kitchen and dining room, and the energy of the hostess to act as a trait d'union in a competent way, without ever missing a smile for the guests. As a self-taught and strong-willed cook, Ana Ros has built her gastronomic identity by looking at the products and traditions of the area, without precluding the possibility of travelling and capturing suggestions from around the world. In the dish she offers an expressive cuisine, which although attentive has not lost its instinctive essence. The summer tasting menu is offered at 175 euros (255 with wine pairings) and takes guests on a journey of numerous plates, eating them with their fingers and with a fork (or a spoon).

Hisa Polonka is the informal table prepared by Ana Ros and her husband in the center of Kobarid, a cross between a village inn and a beer brewery. Relaxed atmosphere, delicious food, and a more than affordable bill. Among the house specialties is the frika (Slovenian name for frico) made with cheese and potatoes; also venison goulash, roast beef, trout meunière. Draft beers are branded FEO, brewery founded by Valter Kramar.

In the Slovenian Collio, just 20 minutes by car from Gorizia, the Klinec tavern is an example of young and family run hospitality, overlooking the vineyards of Medana. The dishes belong to local tradition, however come served in a designer environment: popolati soups - such as celery - polenta with fried ham, tasty vegetables from the garden. In combination with the local organic wines (starting from those of the house). It's furthermore possible to stop for the night.

The small white village of Smartno, among the first outposts of the Slovenian Collio located just past the border entering from Vencò (do not miss to visit Antonia Klugmann's L’Argine restaurant), is a fairytale place. And hidden inside the house of culture is an equally fairytale table, a tiny bistrot dedicated to olive oil, created in the spaces of an old traditional house. Guests come here to taste Slovenian extra virgin olive oil, but also to try Tatiana's rustic cuisine, in an informal, and very hospitable context.

Near the suggestive bridge over the Soca river (in Italy we call it Isonzo), which can be admired from the terrace overlooking the river, in Solkan, this tavern offers an atmosphere of the past, and in the summer months welcomes guests in a beautiful garden. The cuisine is traditional, inspired by the family recipe book, between freshwater fish - Isonzo trout - and typical cured meats.

In the sixteenth-century Kromberk castle, just 10 minutes by car from Gorizia, the family-run restaurant has existed since the early 1980s, but has been renewed in the last decade by the the last generation. Guests flock here for the atmosphere (not surprisingly, many wedding ceremonies are celebrated at the castle), but also for a fresh, traditional-inspired cuisine, which favours the products of the market, not neglecting ancient recipes, dishes based on game or seafood. Ample choice in the plant world, too.

Leader and pioneer of the Slow Food movement in Slovenia, Tomaz Kavcic is a cooking enthusiast. His personality, which goes hand in hand with the smiling hospitality of his wife XXX in the dining room, is reflected in the brilliant welcome given to guests at Zemono Castle, and in the inventions of a cuisine that thinks outside the box, at times very scenographic, which, however, never penalizes taste. Guests can eat in the dining room/cave set up with soft lights, amazed by continuous magic; or, in summer, in the shade of the beautiful loggia with sweeping views over the vineyards. The more complex tasting menu is offered at 200 euros, but there are several options, even at a lower price, to experience the Kavcic philosophy.

Housed inside Vila Vipolze, Kruh in Vino is the most informal interpretation of Tomaz Kavcic's gastronomic creativity, albeit in a decidedly refined space. The cuisine is more tied to traditions, and focuses above all on 30-hour leavened focaccia and served sliced to showcase the local ingredients, vegetables, meats and local cheeses. For dessert, the strudel is made according to the popular recipe.

Close to the source of Vipava, this inn is famous for its local specialties, based on ancient traditional recipes, revisited with creativity. The ingredients are almost all locally sourced and the menu follows the seasons. In the cellar are many excellent labels from the valley.

In an eighteenth-century farmhouse in the Vipava valley, Majerija offers hospitality and refreshment, with a fresh and Mediterranean-inspired cuisine in summer, and more invigorating dishes of the Central European tradition in winter. You can sit at the oak tables (also in the beautiful outdoor courtyard), choose between duck pâté with sautéed figs and aromatic herbs from the garden, and ravioli stuffed with porchetta, mlinci with broccoli and sage sorbet. The hand belongs to Matej Tomazic, who with his wife leads the charming restaurant and boutique hotel.

The protagonists on the table are the karst traditions (albeit proposed in a modern way) of a particularly suggestive area located only a few minutes from Trieste (the village of Dol pri Vogljah is only one kilometer from the Monrupino border). The cuisine is by Peter Patajac, the decor is minimalistic but well-kept inside. In summer guests can also dine in the garden surrounding the farmhouse. House specialties include game, vegetables from the garden, desserts made with herbs and homemade jams.

Not a traditional tavern as one would expect from reading the term gostilna, although from the outside the appearance is that of a typical karst house, with an outdoor courtyard (where the tables are set up in summer) which reveals the glimpse of the beautiful bell tower of Rodik. The mise en place is elegant, like the tasting menu prepared by Ksenija Mahorcic, inspired by the traditions of the Karst and Brkini, without however renouncing the freedom of creativity.

Just awarded a Michelin star, Jorg Zupan has crafted his restaurant as a true creative atelier, after his experiences in important kitchens such as Quay in Sidney and Fat Duck by Heston Blumenthal. Today his cuisine looks at the Mediterranean, drawing from Slovenian ingredients. Great attention in the dining room (the restaurant is small, in the city centre, animated by the energy of the staff) and convincing selection of wines. Definitely affordable prices, with tasting menus of 3 and 5 courses sold at 25 and 39 euros.

Spajza, which in Slovenian means pantry, is the perfect table in Ljubljana to discover traditional recipes and local products. Smoked appetizers include goose breast and horseradish trout, plus traditional starters like zilkrofi stuffed with potatoes, gnocchi, etc., and succulent meats such as venison fillet proposed with blueberries. Mushrooms abound in the fall season.