Cooking on TV. 70 years of history from Mario Soldati to Gambero Rosso Channel 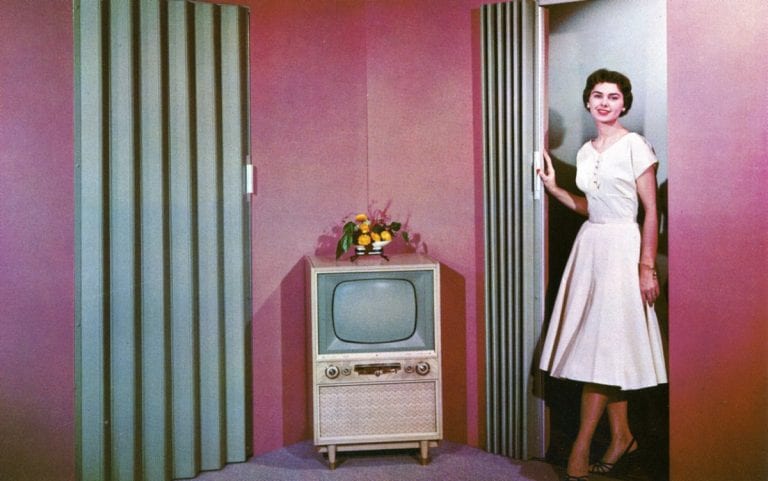 The whole history of cooking on TV from post-WWII to Masterchef, via Gambero Rosso Channel.

From Vetrine in post-WWII up to Masterchef, by way of Gambero Rosso Channel which in 2019 celebrates its first 20 years: the history of cooking and food and wine on Italian TV from the era of the first "lessons" to that of social omnivores and omnipresent influencers. Our stomachs and eyes are on tele-culinary binges. The attachment to certain gastronomic TV programs, now nicotine for our chef-infested brains, has led us to distort reality: and if Italians have always been technical managers of the national football team, today we begin to feel that they are all chefs, expert gastronomes and sommeliers, too. By the mere fact of knowing how to comment––with hashtag blows––a failed dish of a television chef, or about an ingredient used that clashes with the original 1800 recipe.

We got to the point of despairing for Cracco losing his Michelin star, without knowing why, or giving more relevance to the police raid in the bistro of Antonino Cannavacciuolo than to the annoying blitz of our mother-in-law in our own house. The media, relatively new (like social media) or more traditional (like the TV), have transported us to a culinary television reality that has become like daily bread: it can never be missing at the table. But when real bread wasn't there; when we came out of WWII, when television was born, would we have ever thought of Cracco and his stars? Culinary television was already there, but it was born for a completely different purpose and we'll try to tell this fascinating story.

It's 1952. While in England the cry is "God save the Queen", in Italy Rai TV debuts with experimental television. A young journalist from the magazine Grazia peeps out in the primordial cathode tube. Her name is Elda Lanza, the first official presenter of Italian TV. When the management asks her to think of a new program, she doesn't take long to understand that we must meet the needs of that handful of Italians who spend long hours at home, especially women who don't hang out - like their husbands - at bars and cafes.

Vetrine is born, the first female TV show offering cookery lessons in addition to reviewing books and lending tips on fashion and make-up. The column is entrusted to Luisa De Ruggieri, journalist and great admirer of the world of cooking. The first impression is in fact imprinted on the teleculinary planet: De Ruggieri explains her recipes in detail giving advice on how to improve preparations. She continued her "lessons" until 1957, the year in which the show stopped airing, but - considering how her teachings had been successful, how the vision of food was changing and that people, out of the war, needed know how, and RAI becomes an indispensable tool that educates and teaches - viewers were not left on an empty stomach.

On December 3, 1957, the first episode of Viaggio nella Valle del Po aired. In his search of genuine food, Mario Soldati put together a fabulous and, still to this day, mythological reportage in 12 episodes that the journalist, writer and director lead by going to visit the owners of trattorias, restaurants, asking for recipes and showing the backstage of professional and non-professional kitchens. A program that laid the foundations for the spreading of gastronomic culture no longer limited to survival or to domestic kitchens, but rather extended to featuring genuine products and preparations and to the stories - to the narration, we would say today - of those who make them.

The first culinary challenge on television

The first culinary challenge on television among non-professional chefs dates back to the 1970s, baptized by Luigi Veronelli with the program "A tavola alle 7" (initially "Colazione allo studio 7"), a show broadcast from 1971 to 1976 in which, between culinary tips and telephone quizzes - conducted by the delightful Ave Ninchi in the latest editions - amateur cooks armed with pots and pans challenged each other reproducing the dish of a region each in its own version (examples: Umbrian ribs vs. Sicilian pork chops). The preparations follow the cooking times, very slow, reflecting at times the current society of that time: without too much frenzy, with the time it takes. In this period the first skilled cooks peeked out, men who checked out their wives from the ancestral role of homemakers and taking the scepter to transmit their their work to the kitchen.

The 70s were brilliant years for the Italian tele-gastronomic landscape. Alongside Veronelli's regional story, there was Giuseppe Mantovano and Sergio Spina who crossed the borders of the country to get to foreign territories and introduce the cuisine of the French, Spanish, Austrian, Yugoslav, German, Egyptian, Moroccan (and beyond), with the program "Il mondo a tavola". A true gastronomic journey led by expert journalists that filled the void of Italians at the table, with little foreign knowledge. The show featured famous restaurants, wines, types of consumers, all with the constant historical-cultural framework in which the investigation took place.

1980s. It's time to say goodbye to educational television. And it's time for the first precooked foods and then the first cell phones, the methanol wine scandal, and while on the one hand commercial TV is advancing with the pretense of sharing the monopoly with RAI, on the other culinary programs are affected by this split. TV is now also commercial and entertains: "Il Pranzo è Servito" on Finivest networks, and on Telemontecarlo the presence of Wilma De Angelis is consolidated, she becomes the queen of TV-dependent housewives with her recipes filled with product placement at each step (how to forget the ubiquitously pushed Friol oil or products from the Valle degli Orti). Shows like "Sale, pepe e fantasia", "A pranzo con Wilma", "La spesa di Wilma", "Complimenti allo chef" gently place De Angelis, rediscovered (in gastronomic guise) by a daring Paolo Limiti and requested by spectators and the channel, despite his obvious incompetence in the kitchen: Wilma will thank in the future her ghost-chef Giovanni Fenini for the fifteen years of cooking lessons that ended in the second half of the 90s.

The old RAI network for her part certainly didn't give up and offered culinary information: under the aegis of Giovanni Minoli, creator and mentor, on Raiuno the blue eyes of Carla Urban challenged Raffaella Carrà's provocative navel on Rai, opening the culinary TV world to health, food and chefs. With "Dimmi come mangi" and "Che fai, mangi?" (secondly) Italians at lunch time were invited to learn about ingredients, products of the earth, with an eye to shopping. The first great chefs of restaurants are invited on television: we remember two camera-shy Gualtiero Marchesi and Gianfranco Vissani.

Simultaneously with the rise of healthy eating on TV, "Linea Verde" was born in 1981, led by Federico Fazzuoli until 1994, in which the agricultural world was explored talking about products, rural traditions and opening the doors even to non-experts. The program has its roots in the land that had been of type programs like "A come Agricoltura" (broadcast between 1970 and 1980) and, before that, of "La Tv degli Agricoltori", programs mainly aimed at farmers in a still semi-rural Italy. Linea Verde is one of the programmes that in the last 40 years has followed the rural world in its evolution (it still does today), featuring an agricultural Italy that has managed to survive to the point of reinventing itself in more avant-garde versions: see hydroponics or the adoption of the internet of things. We can't not mention in this review "Melaverde". Among the historical and long-lived TV hosts there is food and wine critic Edoardo Raspelli who has been at the helm for 20 years (since the end of the 90s): the program travels around Italy to rediscover the territory, the environmental side and the food traditions that are mainly behind local food companies.