In the enchanting wild bay of Chochlakas, just steps from the water, Oklacà offers its light and authentic Italian cuisine with breathtaking views of the sunset from June to September. The Neapolitan couple, him at the multilingual reception and her in the kitchen, has been on the island since the summer of 2012 and also has rooms to let. The menu makes extensive use of the island's production and, in addition to a wide selection of pastas, also made fresh, offers salads and whimsical appetizers, in addition to a few fresh fish entrées. The grilled squid salad is stimulating, among the pastas the Spaghetti al Tarallo with toasted Neapolitan almonds or with Colatura di Alici di Cetara (garum). Among the entrées we likes the Turban of sea bream with tasty bread and lemony potatoes. Attentive service, good selection of jazz music and wines. 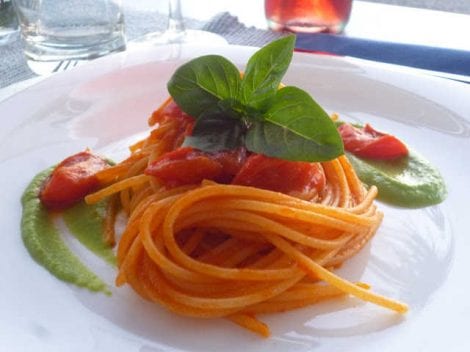