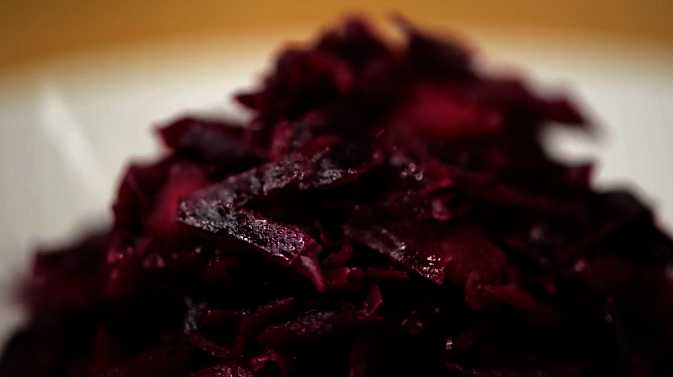 Preparation:
Take the red cabbage, remove the toughest leaves. The outer ones the first two three. Thinly slice
the red cabbage with a slicer or knife. Then place it in a bowl. Add fine salt and vinegar, then mix and marinate the cabbage for about half an hour.
Take the lard and put it inside a saucepan. Take the speck and cut it thinly, add it to the saucepan.
Prepare the onion, just a piece, take away a few layers of skin if they are dry. Thinly slice the
onion. Then add the onion to the bacon and the lard. Take the red cabbage and drain a bit of the excess water. Cook it slowly at low heat for about 60 minutes. Then leave it on low heat and
Stir it so it doesn’t stick to the bottom of the pan and come back in an hour.
At this point add the apples, a nice Golden one, peel it. Cut all the apple pulp and slice it thinly
so that it dissolves inside the preparation. Add the apple to the pan with the cabbage and wait until the apple becomes a puree (10-15 minutes). Now serve the red cabbage aside some pork as a side dish.