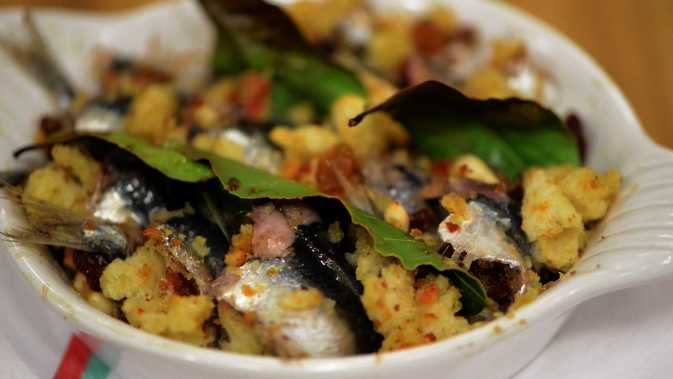 Preparation:
Start with the sardines: with scissors, cut the dorsal fins. Without removing the tail, scam them under running water with a teaspoon without breaking the meat spoiling the skin. The next step is to remove the fishbone, the head and also the guts by pulling with the thumb, taking care not to remove the tail. Put some water to heat and then add the raisins. Then take the bread, even if it is stale, and put it inside the cutter to chop it.Turn on the heat and in a pan pour a drop of oil and the breadcrumbs and toast until it is golden. Squeeze the raisins and place them in the bowl. Add to the raisins: bread and pine nuts and then mix adding the anchovies in oil. Once mixed, start stuffing the sardines. Take a bowl and put some oil in it. Take a sardine, stuff it, close it and place it in the terrine. Place a laurel leaf between each sardine to separate them. The tail of the sardine always upwards. Now add salt, sugar and the sweet and sour of Sicilian cuisine with lemon and orange. Finally, add some breadcrumbs and bake at 180° for about 10-15 minutes.