One travels to Nepal for many reasons that make it an intriguing emotional destination: the splendor of the Himlayas, the charm of a World Heritage city, the call of adventure in the mountains. Among these reasons, however, the cuisine never appears. And it's a sad mistake.

The gastronomic identity of Nepal is a mix of influences hailing from its bulky neighbors. In short, a culinary calembour mixing together China, India and Tibet. The great variety of ethnic groups (about 125) and the rigid division into caste (officially abolished in 1962, but in fact still present) have however prevented a real codification of Nepalese cuisine and the development of traditions shared throughout the country. 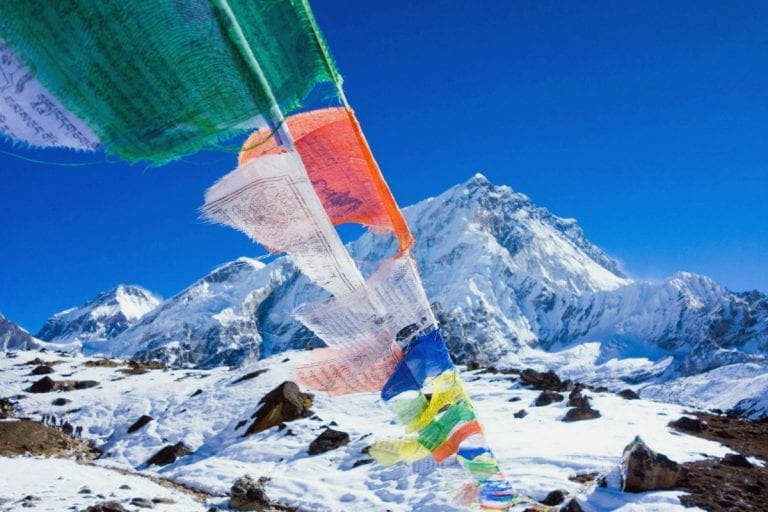 Those who travel to Nepal––for example to do the Annapurna Base Trek, a hiking circuit that arrives at the Annapurna base camp, one of the 8,000 meter peaks of the Himalayas––relies on agencies that organize small excursions (as an example, The Ticino Treks is very good) and that don't lend attention to food itself: in the mountains you eat to gain energy and once back in the city the desire to return to Western flavours is more overbearing than wanting to experiment. For those who have the desire, however, it's possible, with the aid of local guides, to approach the daily life of the Nepalese and to get a taste of their traditions. The experience is very deep, equally to the other aspects of the journey.

Not a country for carnivores

80% of the Nepalese population is Hindu, 10% Buddhist. Both religious beliefs pro-vegetarianism over the centuries have hindered the development of a system of breeding of animals in order to produce meat. Few traditional restaurants serve meat: chickens and water buffaloes are local, beef and pork are instead imported from India. Eating yak meat is somewhat of a half legend. Yak cheese on the other hand is often found, but at outrageous prices for the local population, selling at 10 to 20 euros per kilo. Yak butter is widely used, spread on bread or salted and melted in tea, an ultra-energetic drink that would delight followers of the ketogenic diet.

Agriculture still accounts for 60% of the country's GDP: primarily the cultivation of rice, immediately followed by corn and wheat used for fried bread and chapati. In third position is buckwheat, used above all for polenta, and millet, protagonist of the tongba, a very popular "hot beer": a large tin cup is filled with fermented millet, on which boiling water is poured; the result is a sweet drink with a sour aftertaste which is sipped for hours with a straw. It's impossible not to mention the most famous dairy product of the country: Juju Dhau, or "the king of yogurt" that is only found within the city walls of Bhaktapur. It has a sweet taste and a thick and creamy texture, produced from buffalo milk and served in red ceramic bowls. The Nepali people consume it especially during festivities and religious celebrations, but tourist restaurants offer it year round.

On the Nepali table

Nepal is a republic founded on dal bhat. The Nepali eat it at lunch and dinner, order it at restaurants, and make it the protagonist of their jokes. Served on a metal tray (jharke tal) there's a considerable amount of rice and achar (pickled ginger, chilli pepper, horseradish), cooked vegetables such as Palak Saag Sadheko (spicy spinach) and three small bowls containing curdled milk, vegetarian curry (or, more rarely, with meat) and dal, lentil soup that gives the name to the dish. The garnish is crisp papad, fried lentils.

There is a precise ritual to consume it: to be eaten strictly with the right hand, pouring the soup directly on the rice, which is rolled up and brought to the mouth together with the vegetables or the pickles. The vegetarian version of the dish is called tarkari and is the most popular because it allows unlimited refills: waiters pass between tables with the rice bowl, the soup and vegetables, filling dishes upon request.

Second in popularity is momo, the only dish that travels outside of the borders of the country appearing in menus of so-called Asian restaurants around the world. Egg dumplings filled with meat or vegetables, are common in the other Himalayan states: Tibet and Bhutan. The Indian influence instead is the reason for the popularity of mistha bandar, pastry-snack bars selling samosa and very sugary sweets, while the Chinese influence is in the ubiquitous chow mein and noodles: with eggs or vegetables, in broth or not.

The last fundamental piece of Nepali cuisine belongs to the Newari culture, the fifth most widespread and most urbanized ethnic group. In Newari restaurants––the most luxurious are in Kathmandu––there is widespread use of spices and a great variety of meat cuts and organs, from fried marrow to stuffed lung.