Montalcino: destiny of excellence in the name of Brunello 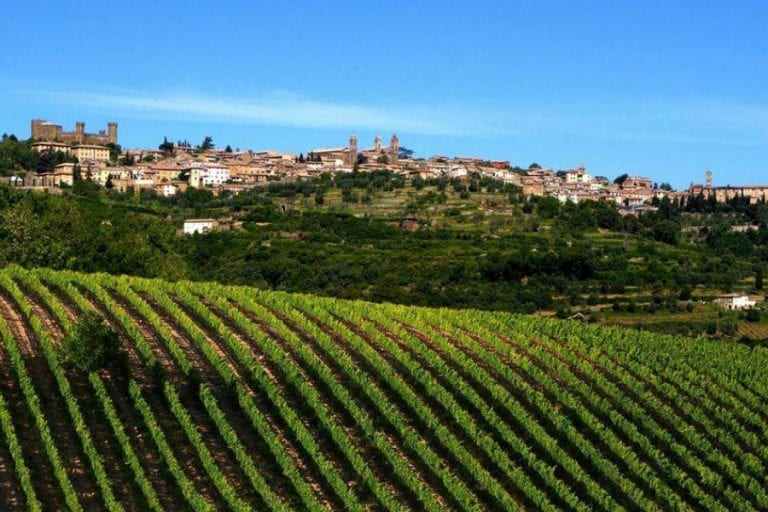 Montalcino is at the top of the tourist destinations that winelovers around the world want to visit. The Val d'Orcia has miraculously preserved its aspect made of history, landscape, culture, food and wine... and above all the Brunello.

Along the roads of southern Tuscany, the succession of soft rolling hills where oak and holm oak forests alternate with the cereal fields, vines and the olive groves, makes us enter another dimension. Here nothing is left to chance. The rural houses, the watch towers, the inhabited centers of medieval origin seem to be details of a painting of a Renaissance master. Montalcino, the heart of these lands 40 km south of Siena, is a village that has remained almost intact since the 16th century, protected by an imposing containing wall and dominated by the Fortress, the Medici castle that characterizes the city skyline. From here the view ranges from Mount Amiata to Val d'Orcia, from Siena (you can see the battlements of the Torre del Mangia) and from the Crete Senesi to Montepulciano.

On clear days you can see Alberese, on the coast, while the sun rays make the waves of the Tyrrhenian Sea sparkle. The production area of Brunello and Rosso di Montalcino is bordered by the valleys of the three rivers Orcia, Asso and Ombrone, a sort of quadrilateral that extends over 243 square kilometers and rises from 120 up to 650 meters above sea level. Brunello was born in this context, an expression of the close union between art and landscape, Mediterranean climate and Sangiovese; in the name of the know-how of the local community. In this sense it's not simply a great wine––Italian and Tuscan, known and appreciated all over the world––but rather a fundamental element of the Montalcino identity and an essential component of the material culture of the Val d'Orcia. "Brunello – observes Giacomo Pondini, director of the Consortium – is a brand known all over the world: you can't resist its charm. But Montalcino is also a social fabric, a community that shares it like a value".

"The winding road that leads from Siena to the Orcia – writes the Sienese poet Mario Luzi – is a road out of time, an open road that with its twists aims to the heart of the enigma". The most famous Italian red wine, its aromas and flavors, the very idea of Brunello, were born between the walls and the countryside of Montalcino, just over a century and a half ago. The extensive historical research carried out over the years all come to the same conclusion: Brunello has many fathers and does not have a definite date of birth. During the 19th century Clemente Santi, Tito Costanti, Camillo Galassi, Giuseppe Anghirelli, Riccardo Paccagnini, Raffaello Padelletti, Ferruccio Biondi Santi, all contributed in various ways to its development, starting from the Sangiovese grapes used in purity. It will take another generation, that of Biondi Santi with Tancredi and Colombini with Giovanni, to get the wine out of the narrow Tuscan area.

Brunello, the engine of development and well-being of the territory played an important role in the rebirth of Montalcino and its countryside, after the destructive events of the first wave of phylloxera and the WWII. In 1960 the world around the vineyards was still made of dirt roads, ruined farms, carts pulled by oxen and olive trees battered by the devastating ice storm of 1956. With the opening of the Autostrada del Sole highway (1958-1964), the road traffic on the nearby Via Cassia collapsed, effectively isolating Montalcino. The abolition of sharecropping (1964), caused a further stalemate and the few remaining craft activities almost completely ceased to exist. In this dramatic situation, Ilio Raffaelli, mayor from 1960 to 1980, and with him some enlightened entrepreneurs, had the intuition that the only way forward was to focus on the increase in tourism and above all on bringing value to quality local products, wine in first place. And that's how it came to be.

When the law on the denomination of Brunello was promulgated in 1966 (becoming Docg from 1980), there were only 37 wineries active and 115 hectares of vineyards cultivated (64 specialized in Brunello and 51 promiscuous). To understand the situation, just think that from 1800 until 1930, the hectares of vineyards have never been less than 2,000 with peaks of up to 4,000. Today the reality is back at (surpassing) the numbers of a glorious past: the members registered in the Consortium are almost 260 (of which 208 bottlers), the Brunello vineyards extend for 2,100 hectares and production has increased from 13,000 to 10 million bottles.

A wave of new investments

In Montalcino, the acquisition by foreign funds of local companies involved large and small wineries, including some protagonists of the modern history of Brunello, giving rise to important transformations in the production chain. If initially the link between the wineries and the territory of production was very strong and in some ways obliged, in this new phase the possibility of weakening that link is real. In fact, apart from the staff present on site, decision-making power is often abroad where this connection is not felt in the same way. However, the tendency of selling the Montalcino companies, in the months and years to come, is due to continue.

Brunello is increasingly attracting investors from all over the world - it's estimated that for a hectare the average premium is around 500,000 euro - and on the other hand many businesses born in the Seventies/Eighties seem to have exhausted their life cycle. Now the owners, unable to continue the business for various reasons (financial, impossibility of family turnover, attractive offers, etc.) are passing the hand. Montalcino, from this point of view, is in full change - also in the way of percieving and living the territory - which will have its weight in the management of the future of the denomination.

The recent history is a chronicle of these days, with changes in ownership of companies born in the Eighties and Nineties (see sidebar and infographic), the bids by international groups, the presence in the markets and on the most important tables in the world, the excellent results of Brunello di Montalcino in every international Top 100 ranking, of which the wine often occupies first place. As confirmed by Patrizio Cencioni, President of the Brunello Consortium: "Even in the years to come, wine and tourism will be the indispensable engines for our future. Our strategic goal is to maintain and consolidate the image of Brunello as a high-end product firmly linked to the territory".

The wine dominates, but the territory of Montalcino is also rich in products of excellence, such as salami, pecorino, extra virgin olive oil (there are a thousand hectares planted with olive groves), saffron, honey (of which Montalcino is the first producer in Italy), farro (70% of national production is born here), cereals and more. The peculiarity also lies in the fact that, unlike other places, most of the production, processing and packaging take place locally. After the fusion with the Municipality of San Giovanni d'Asso, the wine chain, first in importance, was added to a strong truffle business of 110 truffle forests of Tuber magnatum pico, the prized white truffle. The Mayor Silvio Franceschelli has invested greatly in the birth of the Rural District and now for the School of Arts and Crafts related to the food industry (pork butchers, cheese makers, etc.).

In addition to this, the brand of excellence Montalcino is in the finishing line: "Our top products are spread throughout the territory and need to be networked, but that too is not enough. Agriculture can only work if quality professionals are created that add value as in the case of wine: it's the only way to combat depopulation and prevent the distortion of the social balance of our territory". Echoing him is Hubert Ciacci, President of ASGA (Siena Grosseto Arezzo Beekeepers), back from an exceptional honey harvest (20-30 kilos per hive): "In Montalcino we are a dozen professionals and we all believe in the Rural District, because it can be a great opportunity; as well as the mark of excellence of local products transformed on site, we can perform a quality".

Paolo Valdambrini, President of the Tartufai Senesi Association (270 members of which 110 of Montalcino), is also of the same opinion, fundamental for the difficult and expensive maintenance of the marginal territories necessary for the production of the precious fungus: "We want to be among the protagonists of the District to ensure, even in the future, the production and above all the maintenance of the beauty of this countryside". Among the products rediscovered after years of oblivion, is the red gold of Val d'Orcia: saffron, an ingredient of local Montalcino family recipes, is experiencing new life. Marzio Saladini of Pura Crocus in Sant'Angelo Scalo, along with three friends supporting the District, wanted to resume the tradition of cultivation, currently one of the most important saffron cultivations in Italy.

"Saffron represents for us - says Massimo, one of the members - also a way of thinking, preserving and passing on knowledge and customs. It's not a historical and surpassed heritage: it's an invaluable asset for the future and its frenetic transformation". Chimes in Giacomo Pondini, Director of the Brunello Wine Consortium: "The District is also the way to strengthen ties and bring everyone together. We rely on this strongly, as we support the idea that the Brunello di Montalcino Territorial Foundation can play a synergy and pivotal role in the entire production system of the region. Basically, it would complete the offer also on different fronts including artistic, architectural and museum heritage of our territory". Today the challenge is long-term projects, the Montalcino system and Brunello have accepted the challenge.