Strudel is a dessert that can't be improvised. From the preparation of the dough with the right thickness to the selection of the most suitable apples for the filling (using any apple is a crime!), every little step of prep has a net impact on the final result. Naturally we imagine the traditional recipe as a set of strict rules. But no: even fundamentalists there's always a lesser known version to be (re)discovered in old cookbooks, buried by years of oblivion. In fact, we are talking about a very ancient dessert (much more than its leavened alter ego, apple pie), which easily adapts to the customs of the place where it is being made. But what are the historical "ancestors" of apple strudel? 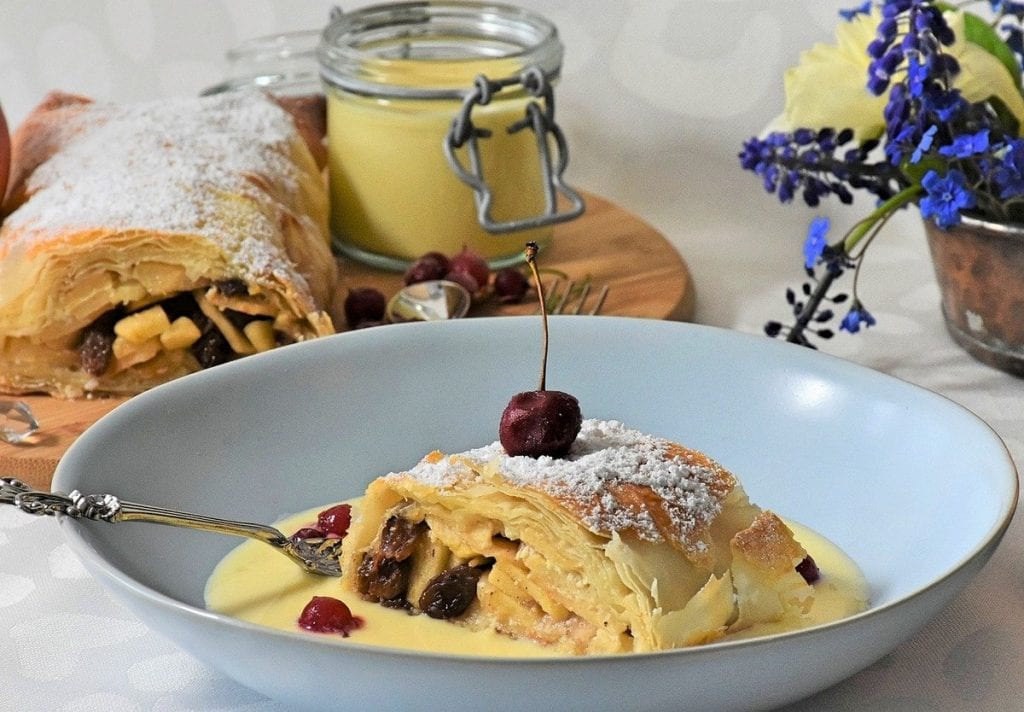 We could compare the history of strudel to a long intercontinental journey. Its popularity in Europe, in fact, is the result of numerous commercial exchanges and culinary cross-pollinations. The earliest evidence relating is found in documents of Asian origin: an Assyrian manuscript of the eighth century BC, for example, reports the description of a meal consisting of layers of puff pastry or unleavened bread, nuts and honey. This combination became very successful in other Mesopotamian kingdoms during the following centuries. It was thanks to the Silk Road that the dessert arrived in Greece (in the 3rd century BC) and then in Turkey, where it inspired the birth of two recipes: güllaç (a light pastry made with corn starch enriched with milk, pomegranate kernels, nuts and rose water, which today is consumed mainly during Ramadan) and baklava.

In 1526, with the territorial expansion conducted by Sultan Suleiman the Magnificent, this layered masterpiece also made its entrance in Hungary, which for almost 200 remained under Ottoman Empire dominion. Probably, pastry chefs started adding apples and replacing walnuts with pine nuts. From that moment on, the basic recipe underwent several transformations, but the sixth century marked a watershed between the use of Turkish phyllo dough - with water and flour, without the addition of fat - and the birth of "crazy dough" today widely spread in in Europe, which owes its more crumbly consistency to the use of oil.

More than a century later, with the conquest of Hungary by Austria in 1699, the dessert began to be appreciated in the Viennese aristocratic parlours. That's how this "popular" meal ending became a noble dish, and the raw materials already used were enriched with the addition of raisins macerated in liqueur. The first detailed text on the procedure for preparing it dates back to 1827 and appears in the Great Viennese cookbook by Anna Dorn, who calls it Apfelstrudel (literally "apple vortex": an expression that lends it context!). With the Austrian domination in Italy, apple strudel also conquered the South Tyrolean, Friulian and Venetian pastry art, becoming one of the most popular desserts in northern Italy (and beyond!). No doubt about the filling: the dough is almost always filled with apples - among the most suitable for this purpose are the Golden Delicious variety from Val di Non, with a pleasantly sugary aftertaste, and the Renette, firm and with a sour finish, in the winter months - raisins softened in rum, walnuts or pine nuts, cinnamon, sugar and lemon juice. Often times, to give an extra twist to the dish, breadcrumbs are also added.

And the shell? There are three alternatives: puff pastry, shortcrust pastry or crazy dough. The first is made with water, flour and butter and represents a good compromise in terms of taste and thickness. Shortcrust is more substantial due to the addition of eggs, it seals the contents with a rigid and compact shell; while crazy dough is particularly fine and light thanks to the use of very few ingredients: water, oil and flour. The choice depends on the desired result: the crazy dough, without a doubt, has the advantage of bringing out the flavour of the individual ingredients, while the shortcrust pastry makes the dessert more structured and sweeter.

The strudel of I dolci di Ricky pastry shop in Bolzano

We asked pastry chef Richard Wieser, owner of I Dolci di Ricky, one of the best pastry shops in the province of Bolzano (awarded with Due Torte recognition by our Pasticceri & Pasticcerie d’Italia Guide) to share with us two strudel recipes: one traditional and one more creative.

To prepare the shortcrust pastry, mix the butter, sugar, lemon zest and vanilla in a large bowl until the sugar has dissolved completely. Add the dry ingredients and knead the dough using your fingertips to make it sandy. Next, add the milk and eggs, mixing well with all the other ingredients. Let the shortcrust pastry rest overnight in the fridge. In the meantime, prepare the filling: peel the apples and cut them into slices of about 3-4 mm. Put all the ingredients in a bowl and mix them with your hands, lightly dredge the fruit with flour.

The following day, roll out the pastry to 4-5 mm thickness and cut out rectangles measuring 30 cm x 40 cm. Spread a little breadcrumbs on the dough and place the filling on it, forming a sort of sausage in the centre. Close the strudel on one side and brush with beaten egg; close the other side and repeat the procedure over the entire surface of the cake. Bake at 160°C for approximately 55 minutes on a baking sheet lined with parchment paper.

Double step for the dough: first prepare the pastel, placing all the ingredients in a bowl and kneading manually until the mixture is smooth. Shape it into a ball and let it rest for 20 minutes. In a separate bowl, work the butter and flour to make the dough, then roll it out into a rectangle. Flatten the pastel with a rolling pin, place it in the centre of the dough and fold the dough over it until covered. Roll it out again to 2 cm thickness and give it a simple fold. Let the dough rest for 20 minutes. Roll out the dough for the last time and form a double fold; wait for another 20 minutes and repeat the procedure.

For the filling, peel the pears and cut them into slices of about 3-4 mm. Put all the ingredients in a bowl and mix with your hands, lightly dredge the fruit with flour. Roll out the dough to 4-5 mm thickness and cut out 30 cm x 40 cm rectangles. Sprinkle with some breadcrumbs on the surface of the dough, then lay the filling forming a sausage in the centre. Close the strudel on one side and brush with beaten egg, then close it on the other side and repeat the procedure over the entire surface of the cake. Bake at 160°C for about 70 minutes on a baking sheet lined with baking paper.