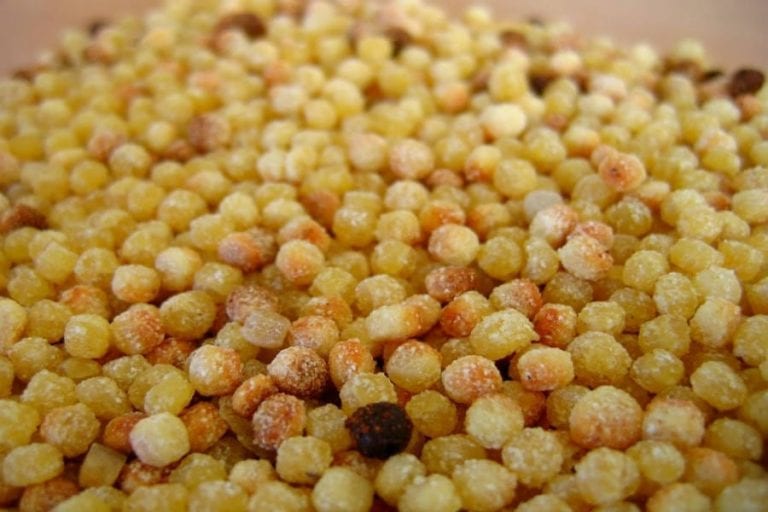 Sardinia is one of Italy’s most virgin and gorgeous territories. With a strong pastoral tradition, similarly in many islands, distance from the mainland has allowed Sardinia to mature its own specific and very particular culture over time, which is now reflected in its cuisine. Here are some of Sardinia’s most characteristic products.ù

Among one of Italy’s most ancient foods, abbamele is a product derived from honey. It is a herbal tea obtained from honey and bee pollen and obtained by submerging the honeycombs in hot water. Once melted, the wax is separated from the honey and pollen. The remaining liquid is then boiled with citrus peels and removing impurities. As the liquid thickens it needs to be stirred more constantly to avoid caramelization. It is cooked until it reaches the texture of honey and then poured in glass jars. 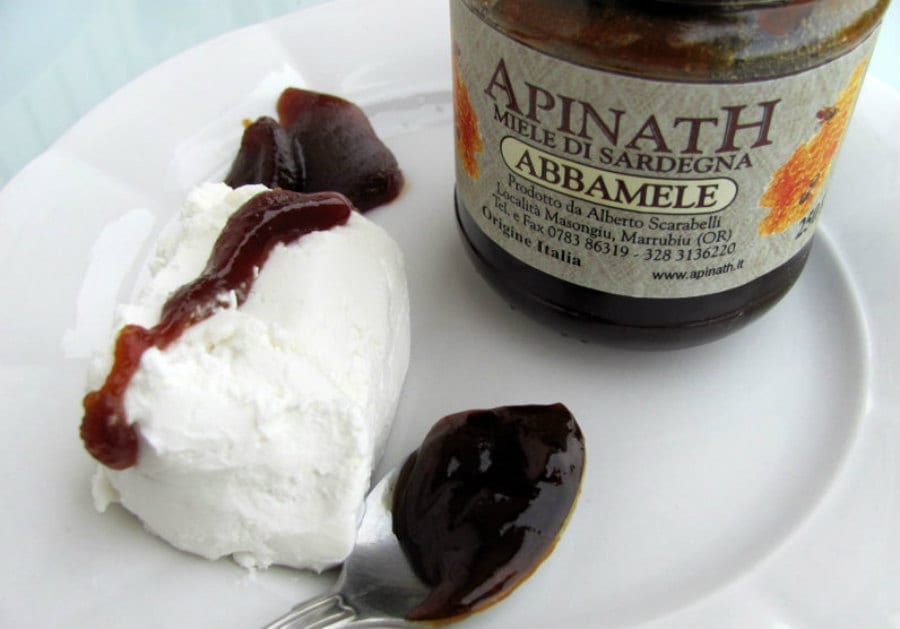 This local delicacy is obtained by drying the eggs of particular Mediterranean fish with traditional methods. This is a costly item that’s only available in certain times of the year and only in limited amounts. In Sardinia bottarga is mostly made using the muggine European mullet, whose intense flavor and deep amber color set it apart from the other kinds. It is for the most part produced in the areas of Cagliari, Tortolì, Sant’Antioco, Terralba Stagno di Cabras, as well as in Tuscany. It can be sold in packed slabs or already grated. It is commonly sliced thinly and eaten on lightly buttered bread, or grated as seasoning in sauteed tomato and garlic spaghetti. Included in Sardinia’s most widespread products abroad are its cheeses, a sum of the island’s ancient agricultural and pastoral past. Callu de crabittu has humble origins. It could be defined as a resourceful recycling of leftovers since it is made with the last remains of the ewe’s milk contained in the suckling lamb’s abomasum (4th stomach) in order to make it curdle and the age it. The flavor is rich and complex and is reminiscent of cave aged cheeses. This is a rare product that’s being made by only a handful of shepherds. It is commonly eaten sliced and served with pane carasau (see below) or fried in lard, and paired to bold wine. 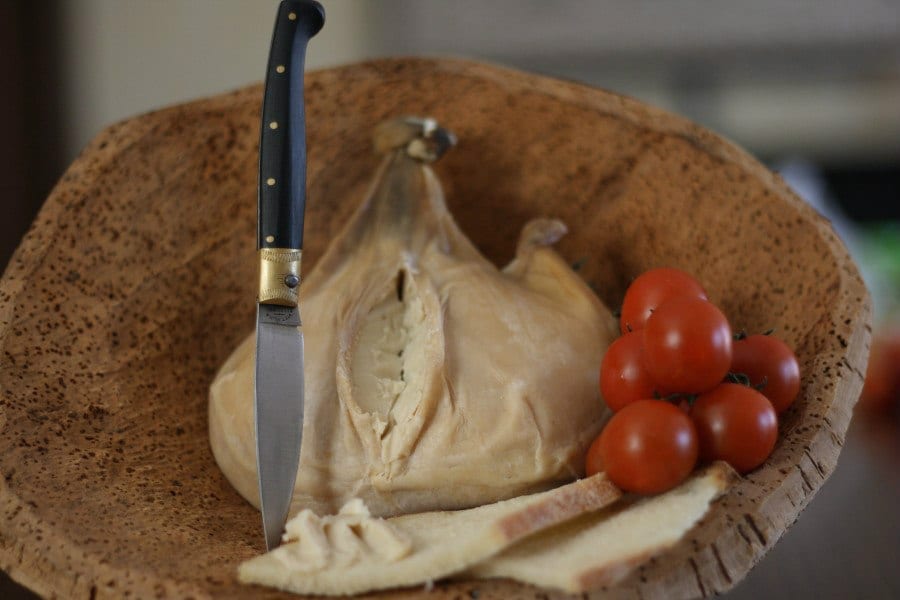 This is surely Sardinia’s most bizarre cheese, which also goes by the names hasu muhidu, casu muchidu, casu fatu, casu cundìdu, casu modde. For many mainlanders, this is simply ‘that cheese with worms’. This is due to the particular insect Piophila casei, aka cheese fly, which lays its eggs in the cheese round and which hatch to become larvae. These feed on the cheese and change the flavor thanks to their protein action. Controversial for years for its purported danger, the EU had banned the cheese’s production and commerce. Thanks to breeding of Piophilacasei in controlled environments at the Sassari Agrarian Entomology Institute, today casu marzu can be legally produced. 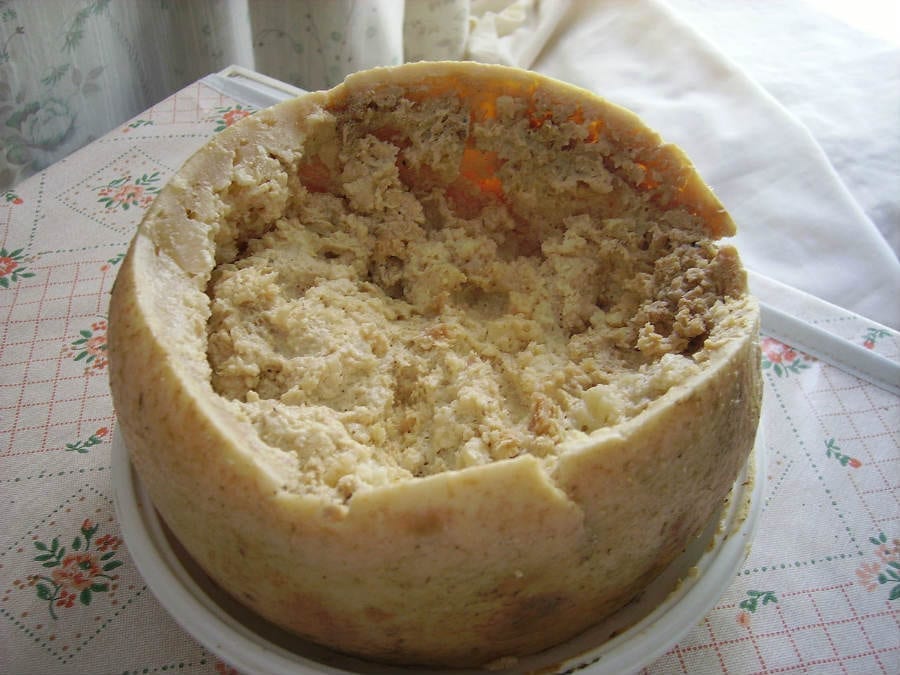 There are virtually thousands of bread varieties in Sardinia: coccoi a pitzusis virtually the most artistic bread of them all. Made with durum wheat semolina it is also called su scetti, and is commonly saved for special occasions. If it is baked for a wedding, it is called coccoi de is sposus. The name also changes according to the shape, for example, if shaped like a horse it is cuaddu, if shaped like a pomegranate it is arnada. It is considered a prized bread, the splendid decorations on the top part are entirely hand made. Traditional dumplings crafted in the Ogliastra central eastern region of Sardinia filled with potatoes, mint and pecorino sheep’s milk cheese. The artfully stitched dumplings are usually dressed with a fresh sausage sauce, or with a simple tomato and basil sauce. Culurgiones are considered a gift of gratitude, according to local tradition they are given as gifts after the harvest and their typical wheat spike stitching motif sa spighitta, is a characteristic element to favour a good crop. 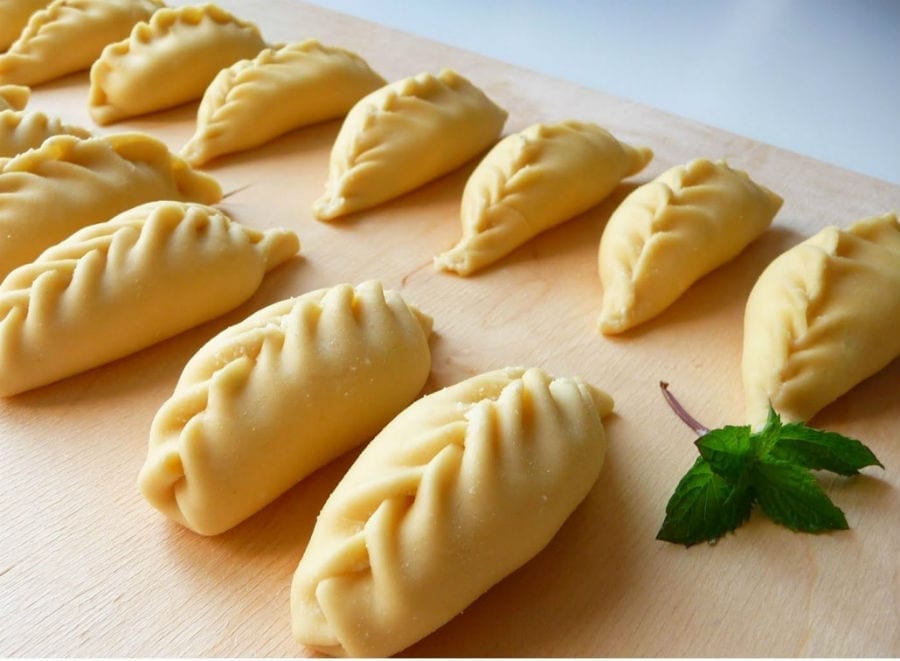 Sardinian ewe’s milk cheese are made with a native breed of sheep called pecora sarda whose origin are said to date back to the Nuragic civilization, hence preceding the 1st millennia BC. Fiore Sardo is a DOP cheese also known as casu ruju (red cheese). This is a hard, raw milk cheese produced exclusively with whole sheep’s milk coagulated with lamb or goat rennet. The particularity of this product is the way it is made in rooms where a wood fire is burning, and which lends it its slight smoky note. 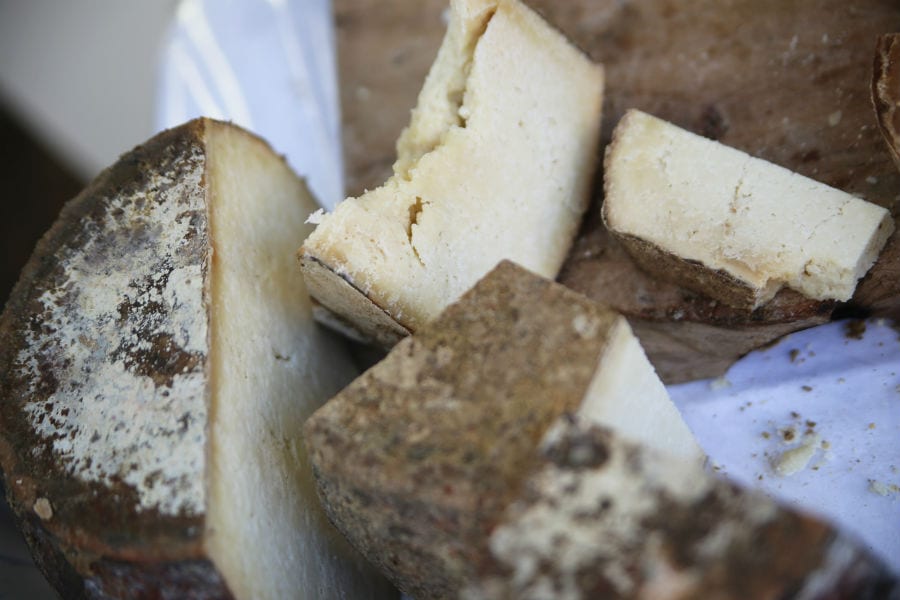 Often mistaken for couscous, fregola – Italianized as fregola – is one of the region’s most unique products. It is made by rolling and rubbing durum wheat semolina into a large earthenware bowl to obtain small 2-6 millimeter beads that are then toasted in the oven. Origins of fregula are uncertain, it could have been imported into Sardinia by the Phoenicians, first mention of it date back to the X Century AD. Fregula is versatile: it can be cooked and dressed like pasta with a tomato and basil sauce, or cooked in fish stew and served in broth with arselle wedge clams. 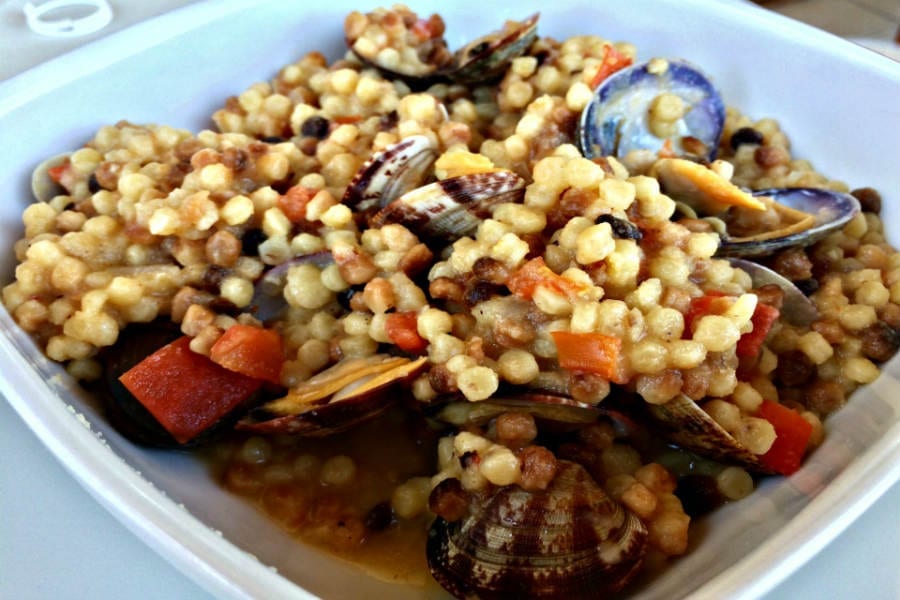 Sardinian ispinadas are the island version of Abruzzo’s sheep meat arrosticini. Like many traditional preparations it served to have meat readily available to shepherds during long days in the pastures with the herds. Small skewers of sheep’s meat alternating lean and fattier parts of the animal’s back. The small size allowed shepherds to cook them quickly without kindling a large bonfire. The small fire was pitched in a small downwind hole in the ground: the small skewers were cooked by placing them over the hole and turned often to cook uniformly. 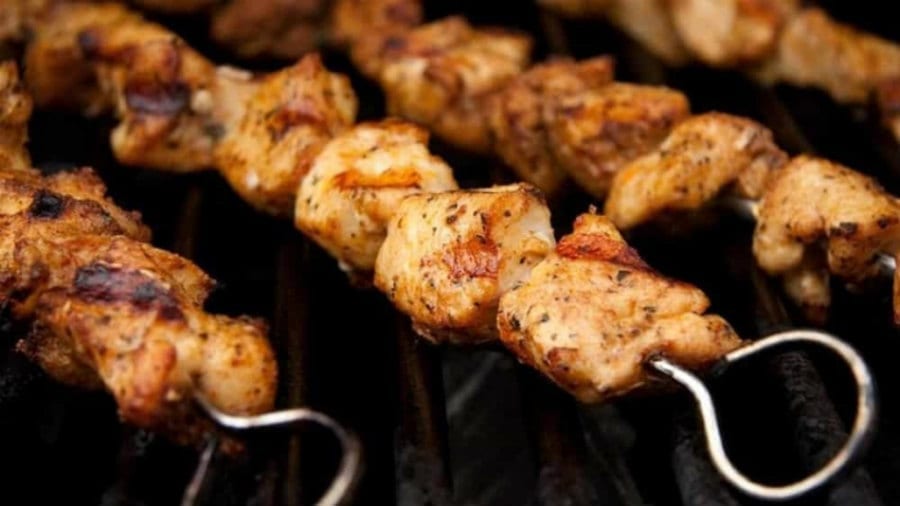 This is one of the region’s most representative pasta shapes, elsewhere in Italy called gnocchetti sardi. In the southern dialect malloru means ‘bull’: malloreddus are thus metaphorically little “calves”. Malloreddus also go by other names according to area: in the Sassari province they are named cigiones or ciciones, near Nuoro cravaos, while in the Logudoro macarones caidos or macarones de punzu. They can be made into the classic version with semolina and water, or added with spinach or saffron in the dough. The typical recipe made for holiday occasions is malloreddus alla campidanese: the pasta is dressed with a sausage ragù and basil, adding at the very end saffron filaments and a dusting of grated pecorino sardo cheese. 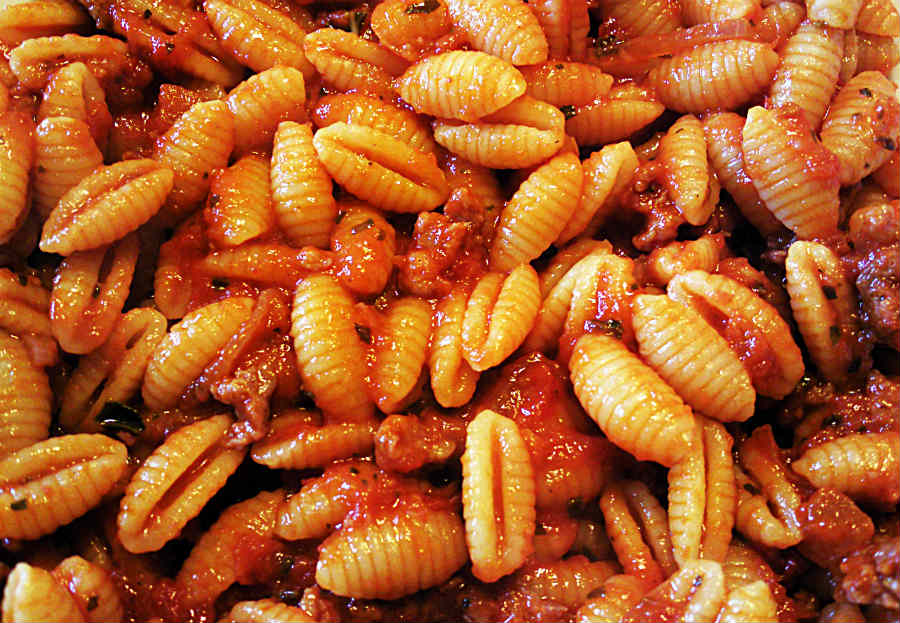 The many remains of snail shells in caves and archeological digs testify how this food was part of local eating habits as far back as the Neolithic period. Mungetas, specifically, are a particular species of snails (monachelle) that is quite widespread, in Sardinia other species are cooked in the same fashion: the large Helix Aspersa, locally known as boveri or coccoiddu, the light, striped Eobania Vermiculata, aka giogge in northern Sardinia and sitzigorrus in the south; gioghittas and monzittas, are the smaller yet tasty little snails. Giogge are for the most part cooked in a spicy tomato sauce, while mugentas are usually roasted or sauteed with olive oil, garlic, breadcrumbs and parsley. 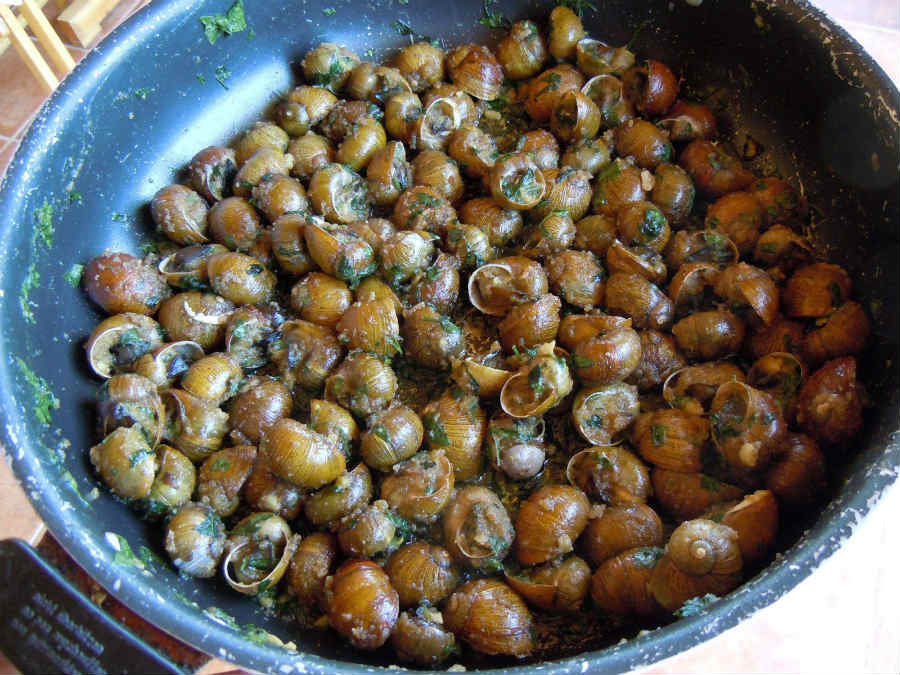 The list of Sardinian dry sheet breads is extensive. Like for any other easily portable and less perishable goods, these cracker type breads served shepherds during their long times away from home with the flocks of sheep during winter. Pane carasau, known worldwide, is made with durum wheat semolina, but there’s also a less refined version made with barley flour. In many parts of Sardinia, leftover carasau is eaten for breakfast. Thanks to its ability to absorb liquids, carasau is the base for various recipes, the most famous of which is pane frattau, a preparation in which carasau is softened in meat broth or in water and layered with tomato sauce and grated pecorino cheese and topped with a poached egg. Pane guttiau, instead, is a flavored carasau traditionally with olive oil and rosemary, nowadays also with poppy seeds, saffron, chili pepper and truffle. 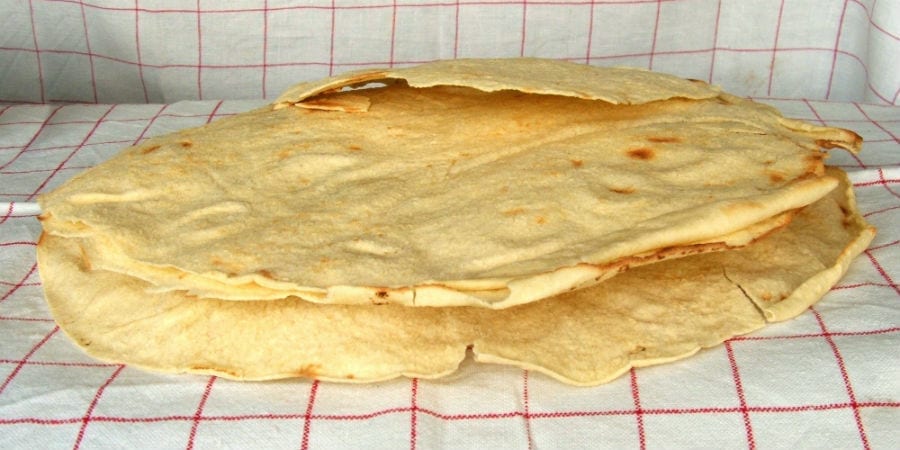 Common mostly in the Sulcis and Campidano areas, these are typical Easter sweets: miniature cakes filled with ricotta and saffron or cheese (in this case they are called Casadinas).The cakes are then flavored with orange or lemon. In some areas of the Sassari province sultanas are added to the filling. Ricotta filled pardule are very delicate, while the ones filled with sheep’s milk cheese are more sharp and savory. 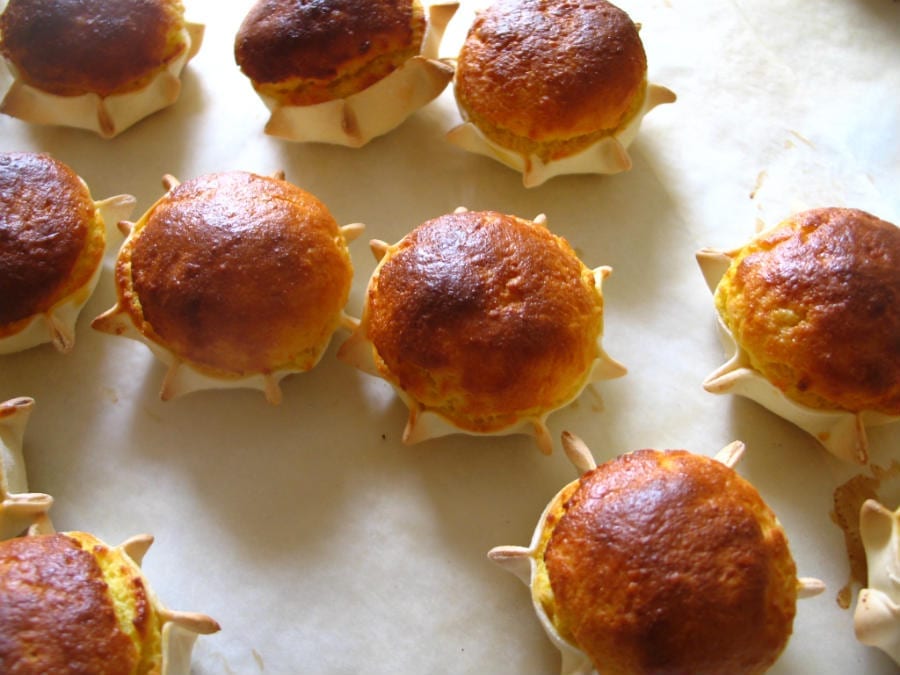 We could not omit pecorino sardo from this list. It is one of Italy’s most famous cheeses, under DOP appellation since 1991. The cheese is made with pasteurized pecora sardasheep’s milk milk, rennet, salt and milk enzymes. There are two types marketed, a milder kind aged 1 or 2 months, and a sharper kind, which is aged 6 months. They are both eaten as is, but the saltier version it is also used grated over foods. Despite DOP regulation, the governing directives are not that strict, this allows the sale of many different kinds of pecorino sardo, both the artisanal kind and the more industrial sold in big chain grocery stores. 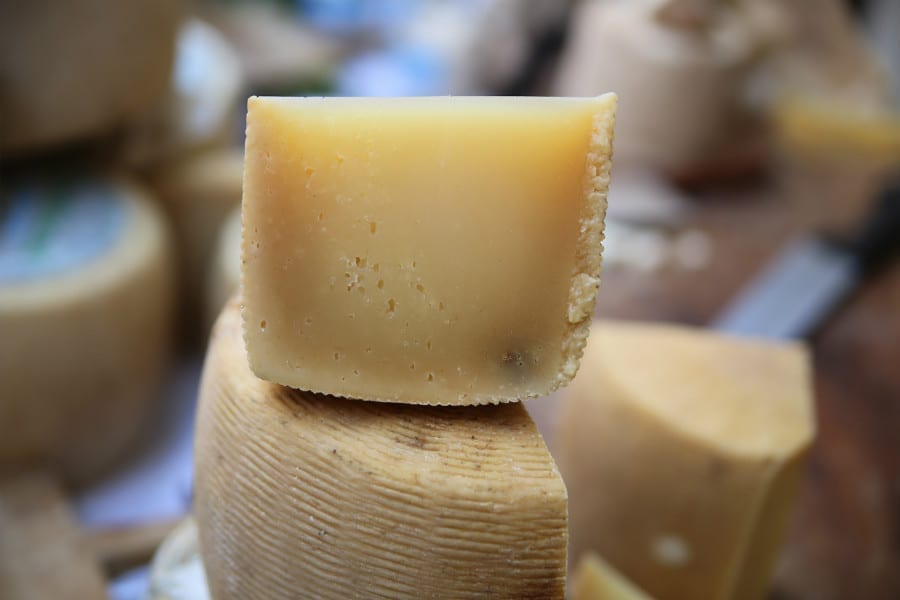 If you’ve been to Sardinia, you know there’s no joking around when it comes to roast suckling pork. This is a preparation Sardinians consider a pillar of their traditional cuisine. To prepare it, you need suckling pigs weighing approximately 4 or 5 kg, and which must be under 20 days old. The piglet is speared whole and fire grilled vertically and spun often to cook evenly and to avoid shedding of juices. It is normally flavored with myrtle leaves and rosemary before and during roasting. This preparation requires above all patience: cooking times are between 3 to 5 hours. 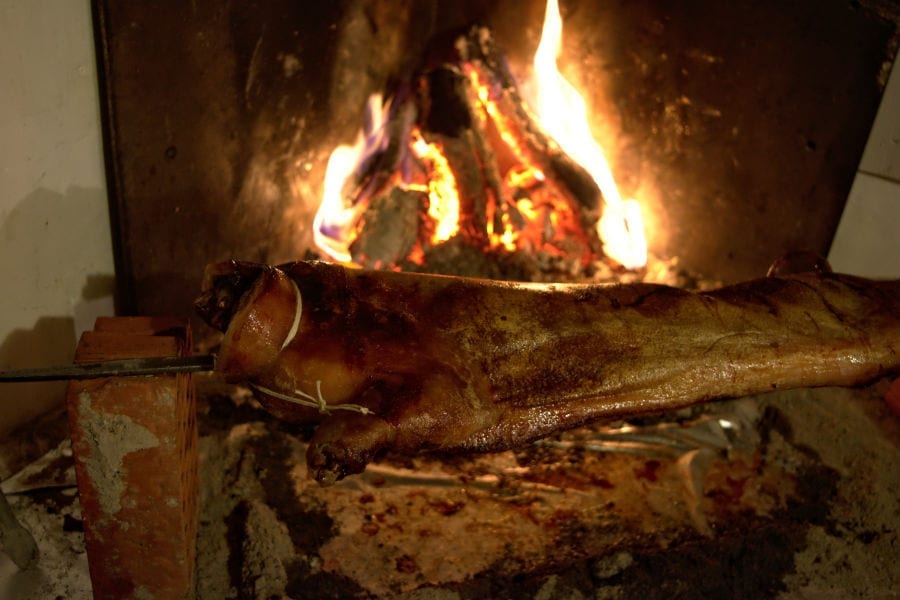 We close the alphabetical Sardinian food primer with a fried dessert called sebadas or seadas. The origin of this dish is Spanish, and is made with two discs of semolina dough kneaded with lard, which lends it a particularly fragrant texture. The filling is very fresh curdled cheese flavored with lemon zest. There are two versions of this dessert: one with cooked cheese and one with raw cheese also known as sa mandrona, i.e. “in the lazy way”. The sebadas are deep fried and then drizzled with honey and sugar. This is only a taste of the products of Sardinia, a starting point for discovering all the local variations, which can change from province to province, but often from town to town, characterising breads, stuffed pastas, desserts. These are differences that make this fascinating and in part undiscovered region’s culinary tradition so great.

With the collaboration of Giuseppe Carrus

Regional cuisine: Alphabetical guide to the foods of Puglia

Regional cuisine: Alphabetical guide to the foods of Calabria 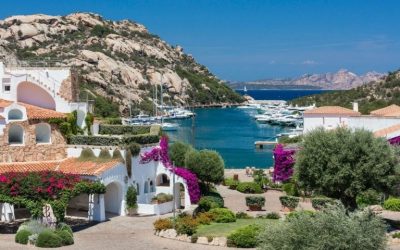 Unexpected Sardinia: strolling through Poltu Quatu between sea, re... 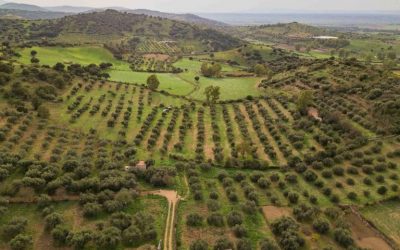 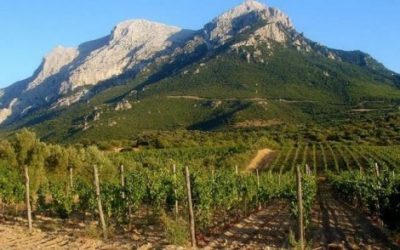 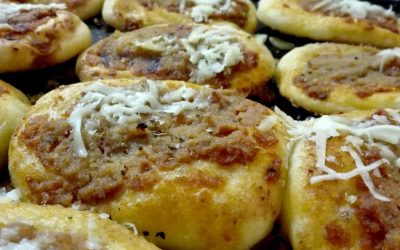 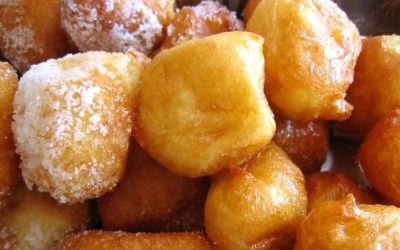 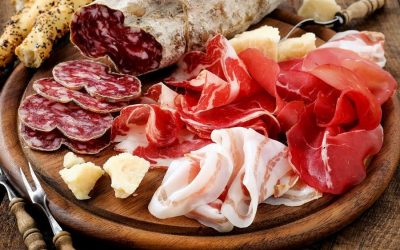 Regional cuisine: Alphabetical guide to the foods of Calabria