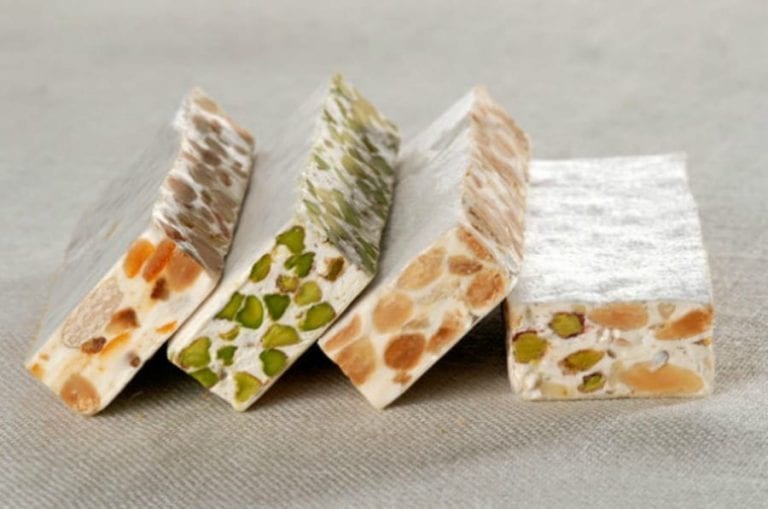 Panettone and Pandoro dominate the Italian Christmas table. Torrone always plays a supporting role. But in actual fact the confection boasts ancient origins and offers an extraordinary array of variations: crumbly, soft, nut- and seed-studded with hazelnuts, almonds, pistachio, sesame and walnuts, stuffed or glazed with chocolate, spiced or infused with liqueuer. Have you ever tried making it at home?

Panettone and pandoro Panettone and pandoro – like every Christmas since the Sixties – will dominate the holiday table. Yet, the oldest end of the year treat is torrone. Milanese panettone, and pandoro which is veronese by origin, torrone belongs to the sweet confection tradition of the entire Mediterranean. According to one source, torrone was born in ancient Rome, others believe it has Chinese origins, and brought to the Mediterranean by Arab tradesmen. It doesn’t therefore surprise that this is a typical Spanish, Greek and French holiday sweet. The ingredients are more or less the same: nuts, egg white and honey. In Italy alone the varieties abound thanks to the Bel Paese’s wide nut biodiversity. In Piedmont, the base for torrone reflects the area’s tonda and gentile delle Langhe Igp hazelnuts. In Veneto, it’s almonds as well as in Cremona (where torrone was officially born in 1441 for the wedding banquet of Bianca Maria Sforza Visconti and Prince Francesco Sforza) and in Puglia, where Toritto (near Bari) almonds are under Slow Food Presidia tutelage. In Campania torrone is studded with Giffoni Igp and dell’Alta Irpinia hazelnuts and Benevento almonds. Sicily, home to famous almonds from Noto and Avola and the world-famous pistachios from Bronte, boasts an amazing selection of torrone variants, among which sesame giurgiulena aka giuggiulena or cubbaita.

Whatever the origin, can torrone be made at home? We asked Pietro Scaldaferro, fourth generation confectionary artisan (his business was born in Mira in 1919). A passionate pro who only employs top-nothc quality ingredients and meticulous craftmanship. His almond nougat is not your average torrone, rather extraordinary and crumbly amber petals. His product is probably not so easy to replicate at home.

How to make it at home

Yet, we’re curious. So we asked Mr Scaldaferro advice on attempting homemade torrone: “Of course it can be homemade, but you need one essential tool: a pastry thermometer. A stand mixer also helps. Soft nougat is also easier to make than the hard kind, which requires bain-marie (double-boiler) cooking for many hours. As far as my recipe… I can’t share it, I’m sure you understand. I can only suggest using Sicilian honey and Puglia almonds”. Relieved knowing it can be made at home, we asked Maurizio Santin, pastry chef known as “Cuoco Nero”, and star of Gambero Rosso Channel. Here’s his recipe.

Beat the egg whites with the water and sugar syrup to obtain stiff peaks. incorporate the boiling hot honey (heated in a double boiler untili t reaches 120° C) pouring it slowly until completely blended. Cool the meringue, then add the remianing ingredients using a spatula. When completely blended, pour the mixture on a sheet of wafer paper and flatten with a dampened pastry spatula. Cover with a second sheet of wafer paper and flatten with a rolling pin to about 1-inch thickness. Cut in lozenges and store in an air-tight container.